Private Network-to-Network Interface (PNNI) is a suite of network protocols that can be used to discover an ATM network topology, create a database of topology information, and route calls over the discovered topology. With proper planning, setting up a PNNI network is much easier and faster than manually configuring connections through an ATM network.

This chapter introduces the PNNI network database and the following common network topologies:

This chapter also provides guidelines on how you can apply these topologies using the following switches:

A node is a network device that communicates with other network devices. Cisco PNNI-compatible devices serve as nodes in a PNNI network. In this document, the terms node and switch are often used interchangeably. However, in most cases, the PNNI node is a component of a Cisco PNNI-compatible device. For example, some Cisco MGX switches, Release 2.0 and later, can operate as both a PNNI node and as an MPLS device.

The PNNI protocol communicates the state of a PNNI network in PNNI Topology State Elements (PTSEs). PTSEs are discrete messages that contain information about one of the following types of network components:

Since up-to-date PTSE information is required for optimal routing decisions to be made, there are several different mechanisms in place to help ensure that all nodes have reasonably accurate PTSE information. The five common reasons for updating PTSEs are as follows:

Resources administratively added, removed or altered on a node.

Resource failure such as an Loss of Signal (LOS) on a link.

A significant change in link resources due to virtual circuits (VCs) routing or derouting.

PTSE information is passed between nodes using PNNI Topology State Packets (PTSPs). These packets utilize the Routing Control Channel (RCC; VPI = 0 and VCI = 18) between adjacent nodes. The RCC is also used for Hello packets and other PNNI messages. If the switch is unable to establish the RCC with the adjacent node, then PTSE information is not exchanged. Once a node receives PTSE information, the node stores the contents, or element information, in the database. This information is used to generate precomputed routing tables that identify routes to other network devices. The PNNI database is also used to perform on-demand routing when the appropriate routing table does not contain a viable path. 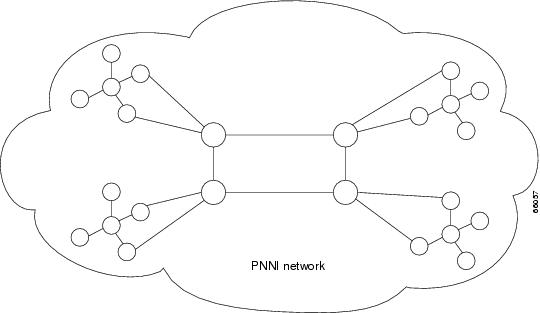 A single peer group topology is the easiest to set up. Since all communications are between nodes in the same peer group, you do not have to configure connections to other peer groups or to other network types. If the network will never connect to a public network, you can use most of the default PNNI configuration settings.

The hierarchical PNNI topology enables multiple PNNI peer groups to communicate with each other, and this increases the total size of the network. The ATM Inter-Network Interface (AINI) and Interim Inter-Switch Protocol (IISP) protocols enable private PNNI networks to connect to other private or public PNNI networks. The AINI and IISP protocols enable communications between networks, but provide a privacy barrier that keeps the network databases in each network private to that network. 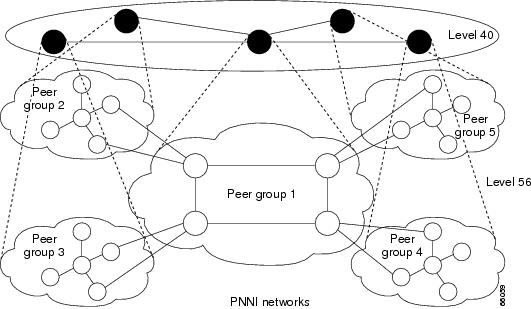 Within each level 56 peer group in Figure 1-3, all the nodes exchange PTSEs to build and maintain a PNNI database that describes communication paths to all other nodes within the peer group. However, individual peer group nodes do not exchange PTSEs with nodes outside their peer group. Instead, LGNs are created during configuration to operate at level 40 and communicate with other level 40 nodes.

Peer Group 2 would support one less physical node because it would have to add one LGN to represent the level 64 child peer group.

The level 64 child peer group could support as many as 155 physical nodes (160 nodes - 1 LGN for each of the 5 peer groups at the higher levels.

There would still be plenty of room for adding more physical nodes to levels above and below those shown in Figure 1-3.

The following sections provide additional information the peer group leaders that operate at higher levels in a PNNI hierarchy and introduce the border nodes that connect one peer group to another.

Network administrators can use configuration commands to control which node becomes the PGL. The configuration process assigns a PGL election priority to each node in the peer group. When PNNI nodes start up, an election is held to determine which node has the highest PGL priority, and that node becomes the PGL. If the PGL node fails, a new election is held among the operating nodes to determine a new PGL. There is just one peer group leader for each peer group.

Network administrators add higher levels by adding LGNs with the addpnni-node command. The PGL election priority is configured with the cnfpnni-election command.

When planning for border nodes, you might want to avoid routing internal peer group traffic through border nodes so that border nodes have more processing resources for supporting traffic traveling in and out of the peer group.

The primary benefit of a hierarchical PNNI network is scalability. Single peer group networks are limited to 160 nodes, but hierarchical networks can support many more nodes.

ATM Inter-Network Interface (AINI) is an industry standard protocol for enabling static routing between separate PNNI networks. AINI only advertises ATM addresses and address groups that are manually configured on AINI links, so the manual configuration makes AINI links more expensive to configure than PNNI links. AINI provides network security and independence by blocking all PNNI advertisements across AINI links. AINI is typically used to enable select communications between two independent networks. For example, AINI links might be used to interconnect two different companies or between a company and a service provider. Figure 1-6 shows an example of PNNI networking with AINI.

Interim Inter-Switch Protocol (IISP) is the predecessor to AINI and serves the same purpose as AINI, which is to link two independent PNNI networks. Unlike AINI, IISP does not support all UNI 4.0 features.