This document describes how to configure horizontal stacking on the IE 5000 switch.

Horizontal stacking is supported on IE 5000 switch model IE-5000-12S12P-10G. Any one or two of the four 10 Gigabit Ethernet uplink ports on this switch can connect to another IE-5000-12S12P-10G switch in a different location to form a stack. You configure the 10G uplink ports as stack ports using the Command Line Interface (CLI). With two stack ports configured, the physical members of the stack form a ring, providing a built-in redundant data path for each member of the stack.

The following figure shows an example of stacked IE 5000 switches connecting multiple cell/area zones in a manufacturing network. The example does not show all possible connections.

Data path redundancy is built into the stacking architecture because there are two physical paths between any two stack members (represented by the green cables in the figure). Stacking increases Ethernet switch availability by providing redundancy for both the physical switch and the uplink. Because different physical switches connect to the upstream network, losing one switch or one uplink interface does not prevent connectivity to the network. Since the logical switch has multiple uplinks, the logical switch still has network connectivity because at least one uplink is still active.

The stack master manages all physical switches, including itself. If the master fails, another member automatically becomes the stack master following an election process. The configuration of the stack is preserved through a single switch failure or a reboot of all stack members. Horizontal stacking provides 1:N redundancy for the stack master, with the ability for any physical switch to back up the acting master.

There are two ways to enable horizontal stacking:

Features of horizontal stacking are as follows:

The following Layer 2 features are supported in stack mode:

PoE is supported in stack mode.

The following types of traffic are supported in stack mode:

You can create an EtherChannel across two physical switches. When devices are stacked, the stack becomes a single logical entity. Nothing special is required to accomplish this once the stack has been configured—just configure each port to be in the same port-channel group. Cisco refers to this configuration as cross-stack EtherChannel. With cross-stack Etherchannel, you can stack up to four devices and configure up to 48 port channels in the stack to provide greater network capacity.

In the following network diagram, there are two network stacks, Stack A and Stack B. Stack A has three switch members, and Stack B has only one switch member. The EtherChannel is formed with two ports on Switch 1 and one port on Switch 3 of Stack A. These ports connect to the three ports in Stack B. The diagram shows the configuration of one port channel in Link Aggregation Control Protocol (LACP). LACP provides two modes to configure the Etherchannels, Active and Passive.

Ports can form an EtherChannel when they are in different LACP modes as long as the modes are compatible. For example:

In the following network diagram, there are two network stacks, Stack A and Stack B. Stack A has three switch members, and Stack B has only one switch member. The EtherChannel is formed with two ports on Switch 1. These ports connect to the two ports in Stack B. This diagram shows the configuration of one port channel in PAgP. With PAgP enabled all the ports in the channel should belong to same device of a stack. PAgP provides two modes to configure the EtherChannels, Auto and Desirable.

Ports can form an EtherChannel when they are in different PAgP modes as long as the modes are compatible. For example:

A port in Auto mode cannot form an EtherChannel with another port that is also in Auto mode because neither port starts PAgP negotiation.

By default, 10G interfaces are configured to operate as network ports.

Converting a Stack Port to a Network Port

To convert a horizontal stack port back to a TengigabitEthernet uplink port, follow this procedure.

When no 10G network port is configured as a stack port, the IE 5000 will run in standalone mode. The switch in this mode cannot be stacked with another stack-enabled or standalone IE 5000 switch. IoT protocols can be configured in this mode.

To display the stacking status of the 10G ports, enter the following show command:

Any 10G port that is configured as a horizontal stack port can be converted back to a normal uplink port. This will be effective only after the next reload.

The following example shows output for a four-member full ring horizontal stack on the IE 5000: 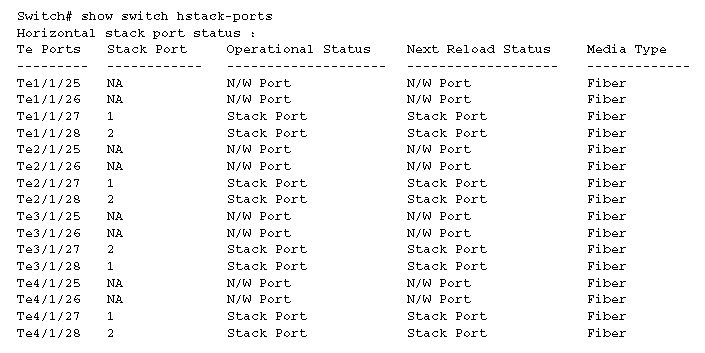 The following example shows the output when Te1/1/27 and Te2/1/28 are converted back to N/W ports, but the switches have not been reloaded:

To display the role of a stack port, use the show switch command:

The preceding example shows that member 4 is the master. All stack members have a stack priority of 1 (the default).

To view other operational aspects of the stack, these commands are useful:

This example shows how to convert two 10G uplink ports from network ports to stack ports:

This example shows how to convert a stack port to a network port: