When determining where to install the switch, verify that these guidelines are met:

Before you install the switch in a rack, on a wall, or on a table or shelf, power on the switch and verify that it passes POST.

To power on the switch, plug one end of the AC power cord into the switch AC power connector, and plug the other end into an AC power outlet.

As the switch powers on, it begins the POST, a series of tests that runs automatically to ensure that the switch functions properly. LEDs can blink during the test. POST lasts approximately 1 minute. The SYST LED blinks green, and the other LEDs remain solid green.

After a successful POST, unplug the power cord from the switch and install the switch in a rack, on a wall, on a table, or on a shelf.

If your configuration has an RPS, connect the switch and the RPS to different AC power sources. See the Cisco RPS documentation for information.

Figure 1. Stacking Switches with the 0.5-meter FlexStack Cable. These figures show the switches stacked in a vertical rack or on a table. The connections are redundant.A Catalyst 6800IA-48FPD switch is shown in the examples, the Catalyst 6800IA-48FPDR switch can be stacked the same way.

The following topology is created by stacking switches with FlexStack-Extended Fiber modules that are deployed across different floors of a building. The SFP+ module ports are connected using fiber cables.

Figure 3. Stacking with FlexStack-Extended Fiber Modules Across Floors of a Building 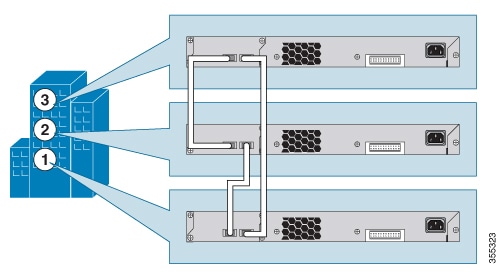 The following topology is created by stacking switches with FlexStack-Extended Fiber modules that are deployed across multiple buildings of a campus and different floors of a building.

Figure 4. Stacking with FlexStack-Extended Fiber Modules Across Floors and Buildings 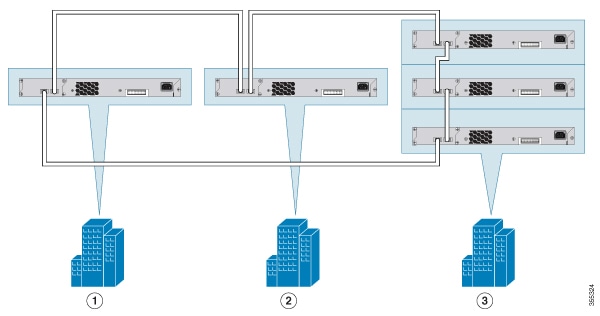 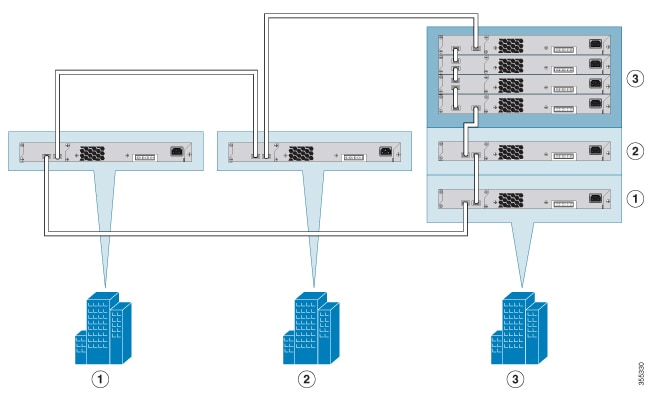 The following image shows a mixed stack network using FlexStack-Plus, FlexStack-Extended Fiber and Hybrid modules. This is one of the supported topologies using FlexStack modules. Typically, fiber modules are used to extend a network for long distance communication across buildings or floors in a building. 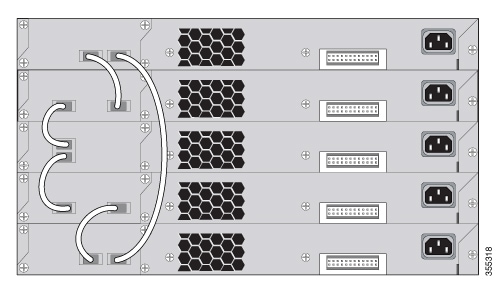 Figure 9. Stack with a Failover Condition. This figure shows a stack with a bad FlexStack cable in link B. This stack provides only half bandwidth and does not have redundant connections.

Figure 10. Partitioned Stack with a Failover Condition. This figure shows a stack with a bad link B. This stack partitions into two stacks, and switch 1 and switch 3 are stack masters.

Consider these guidelines before you power on the switches in a stack:

For conditions that can cause a stack master reelection or to manually elect the stack master, see the Catalyst 2960-X Switch Stacking Configuration Guide on Cisco.com.

Installation in other than 19-inch racks requires a bracket kit not included with the switch.

Figure 11. Rack-Mounting Brackets. This figure shows the standard 19-inch brackets and other optional mounting brackets. You can order the optional brackets from your Cisco sales representative. 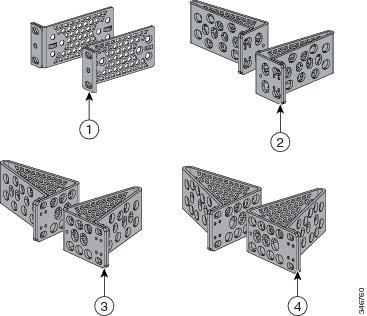 Mounting in a Rack

Attaching the Brackets for Wall-Mounting

Mounting on a Wall

For the best support of the switch and cables, make sure that the switch is attached securely to wall studs or to a firmly attached plywood-mounting backboard. Mount the switch with the front panel facing down.

Figure 16. Mounting on a Wall 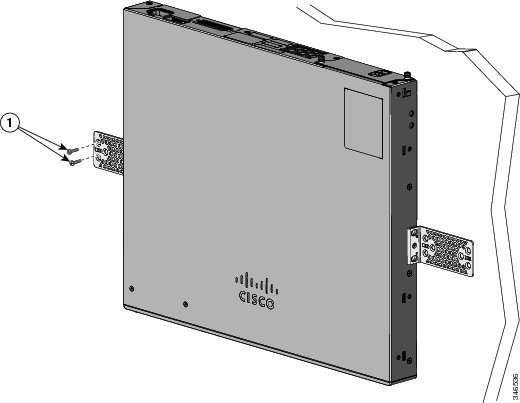 When you complete the switch installation, see After Switch Installation for information on switch configuration.

Installing the Switch on a Table or Shelf

Always use a Cisco-approved FlexStack cable to connect the switches.

The power cord retainer is optional (part number [PWR-CLP=]). You can order it when you order your switch, or you can order it later from your Cisco representative.

Installing an SFP or SFP+ Module

When installing SFP or SFP+ modules, observe these guidelines:

Connecting to SFP and SFP+ Modules

When connecting to a 1000BASE-T device, be sure to use a four twisted-pair, Category 5 or higher cable.

On a per-port basis, you can control whether or not a port automatically provides power when an IP phone or an access point is connected.

To access an advanced PoE planning tool, use the Cisco Power Calculator available on Cisco.com at this URL: http:/​/​tools.cisco.com/​cpc/​launch.jsp

You can use this application to calculate the power supply requirements for a specific PoE configuration. The results show output current, output power, and system heat dissipation.

To maximize performance, choose one of these methods for configuring the Ethernet ports:

The autonegotiation and the auto-MDIX features are enabled by default on the switch.

With auto-MDIX, the switch detects the required cable type for copper Ethernet connections and configures the interface accordingly.