This chapter describes how to configure virtual LANs (VLANs) on Cisco NX-OS devices.

Your software release might not support all the features documented in this module. For the latest caveats and feature information, see the Bug Search Tool at https:/​/​tools.cisco.com/​bugsearch/​ and the release notes for your software release. To find information about the features documented in this module, and to see a list of the releases in which each feature is supported, see the “New and Changed Information” chapter or the Feature History table below.

You can use VLANs to divide the network into separate logical areas at the Layer 2 level. VLANs can also be considered as broadcast domains.

Any switch port can belong to a VLAN, and unicast broadcast and multicast packets are forwarded and flooded only to end stations in that VLAN. Each VLAN is considered a logical network, and packets destined for stations that do not belong to the VLAN must be forwarded through a router.

A VLAN is a group of end stations in a switched network that is logically segmented by function or application, without regard to the physical locations of the users. VLANs have the same attributes as physical LANs, but you can group end stations even if they are not physically located on the same LAN segment. 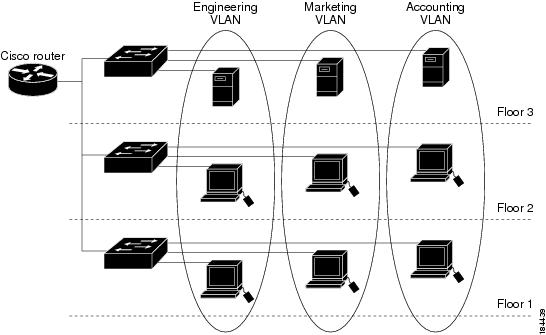 The device supports up to 4094 VLANs in accordance with the IEEE 802.1Q standard in each VDC. The software organizes these VLANs into ranges, and you use each range slightly differently.

For information about configuration limits, see the verified scalability limits documentation for your switch.

The software allocates a group of VLAN numbers for features such as multicast and diagnostics that need to use internal VLANs for their operation. You cannot use, modify, or delete any of the VLANs in the reserved group. You can display the VLANs that are allocated internally and their associated use.

Beginning with Cisco NX-OS Release 5.1(1) , you can configure a VLAN without actually creating the VLAN. This procedure is used for IGMP snooping, VTP, and other configurations.

VLANs are numbered from 1 to 4094 for each VDC. All ports that you have configured as switch ports belong to the default VLAN when you first bring up the switch as a Layer 2 device. The default VLAN (VLAN1) uses only default values, and you cannot create, delete, or suspend activity in the default VLAN.

However, the system retains all the VLAN-to-port mapping for that VLAN, and when you reenable or re-create, that specified VLAN, the system automatically reinstates all the original ports to that VLAN. The static MAC addresses and aging time for that VLAN are not restored when the VLAN is reenabled.

You can upgrade or downgrade the software seamlessly when you use VLANs.

The software supports virtual device contexts (VDCs), and VLAN configuration and operation are local to the VDC.

Each VLAN must have all of its ports in the same VDC. If you do not have enough resources allocated to the VDC, the software returns an error message.

When you create a new VDC, the device automatically creates a new default VLAN, VLAN1, and internally reserves VLANs for device use.

You can reuse the same numbers for VLANs in different VDCs.

The following table shows the licensing requirements for this feature.

VLANs have the following prerequisites:

Guidelines and Limitations for Configuring VLANs

VLANs have the following configuration guidelines and limitations:

VLAN translation has the following guidelines and limitations:

You can create or delete all VLANs except the default VLAN and those VLANs that are internally allocated for use by the device.

If you create a range of VLANs and some of these VLANs cannot be created, the software returns a message listing the failed VLANs, and all the other VLANs in the specified range are created.

This example shows how to enter and exit VLAN configuration submode:

To configure or modify a VLAN for the following parameters, you must be in VLAN configuration submode:

Ensure that you are in the correct VDC (or enter the switchto vdc command). VLAN names and IDs can be repeated in different VDCs, so you must confirm which VDC that you are working in.

Configuring a VLAN Before Creating the VLAN

Procedure
This example shows how to configure VLAN long-names of up to 128 characters.

The following example displays the error output if you try to configure a VLAN long name of more than 128 characters.

The following example displays the error output if you try to configure VLAN name ( more than 32 characters) without enabling the system vlan long- name command.

This example shows how to configure VLAN translation between (the ingress) VLAN 10 and (the local) VLAN 100:

To display VLAN configuration information, perform one of the following tasks:

For information on the output of these commands, see the Cisco Nexus 7000 Series NX-OS Layer 2 Switching Command Reference.

To display VLAN configuration information, perform one of the following tasks:

The following example shows how to create and name a VLAN as well as how to make the state active and administratively up: