Chapter: Running a VSM and VEM on the Same Host


Running a VSM and VEM on the Same Host

This chapter describes how a VSM and VEM can run on the same host.

The VSM and VEM can run on the same host. In this case, the VSM communicates with the co-located VEM and other VEMs in the network using its own switch.

The following are examples of networks where you could run a VSM on its own host:

Environments where the server administrator can guarantee that the VSM VM will not be mistakenly powered down or reconfigured.

To avoid any possibility of losing communication with its VEMs, it is recommended that the VSM be installed on a separately-managed server.

The following are examples of networks where you are advised to run your VSM on a separate host from its VEMs:

Environments where the server administrator cannot guarantee the virtual machine for the VSM will be available and will not be modified.

Environments where network administrators have their own ESX server hosts to run network services.

Figure 5-1 shows a VSM and VEM running on the same host. 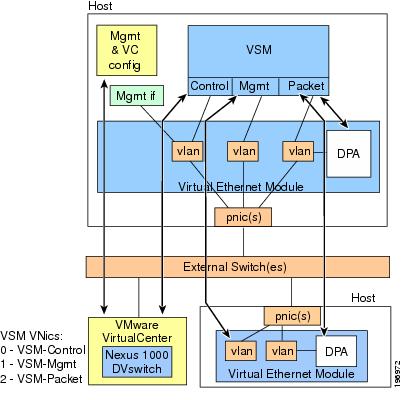 When running a VSM and its VEM on the same server host, use the following guidelines and limitations:

When the virtual NICs for a VSM are attached to one of its own VEMs, both network and server administrator must ensure that their actions do not interfere with the configuration that enables the VSM to communicate, including the following:

The management port must use a system port profile.

The control port must use a system port profile.

It is recommended that the packet port use a system port profile.

To bring up a new VSM on a server using its own VEM, it must have at least 2 physical ports.

If the virtual disk for the VSM is accessed via iSCSI or NFS, the storage vmknic on every host that may run the active/standby VSMs must use a system profile.

The server administrator must not detach the VSM from its networks, including the following:

Do not stop the host server.

Do not remove the host server virtual NICs or change their port groups.

Do not remove any physical ports in use by VLANs that are needed by the host server virtual NICs.

Since the critical management and control ports for the VSM must use system port profiles, these networks will be available on any host that supports the correct VLANs on its physical ports. Therefore, VMotion of either the primary or standby VSM is supported on these hosts.

Since the VSM depends on itself for configuring the VEM on which it is running, it must first be brought up using normal vSwitches to connect to VC and its server host. This is a transitory state that is only required the first time the VSM is brought up.

Use this procedure to configure a VSM and its VEM on the same physical server host.

Before configuring the VSM and its VEM on a single ESX server, you must know or do the following:

You have already installed and set up the Cisco Nexus 1000V software on the ESX server using the "Setting Up the Software" section on page 2-1, including the following:

Installing the VSM on an ESX server with vSwitches for the following:
- management
- packet traffic
- control traffic

Configuring physical ports on the vSwitches for control, management, and packet VLANs.

The ESX server host has at least two physical ports.

The standby VSM can be directly added to Cisco Nexus 1000V when it is created, and will not require the following procedure.

A VSM that is already running in a vSwitch environment on the same host can also be migrated to a VEM solution using this procedure. By reversing this procedure, a VSM can be moved from the VEM back onto vSwitches if needed.

Assign the VSM management port to the corresponding port group on the Cisco Nexus 1000V.

Assign the VSM control port to the corresponding port group on the Cisco Nexus 1000V.

The VSM and VEM control traffic (and that of other VEMs in the network) now use Cisco Nexus 1000V.

Assign the VSM packet port to the corresponding port group on the Cisco Nexus 1000V.

You may now reuse the old physical port for Cisco Nexus 1000V.

You have completed configuring a VSM and its VEM running on the same server host.

The following example shows the port profile and domain configuration for a VSM and VEM on the same host .

In this example the following VLANs are used:

In this example, the ServiceConsole is not configured for VLAN tagging. The vethernet port profile could easily be changed to trunking if required.