Cisco MDS SAN-OS Release 3.1(1) and NX-OS Release 4.1(1b) or later implements FIPS features and is currently in the certification process with the U.S. government, but it is not FIPS compliant at this time.

Make your passwords a minimum of eight characters in length.

Disable Telnet. Users should log in using SSH only.

Disable remote authentication through RADIUS/TACACS+. Only users local to the switch can be authenticated.

Disable SNMP v1 and v2. Any existing user accounts on the switch that have been configured for SNMPv3 should be configured only with SHA for authentication and AES/3DES for privacy.

You see the FIPS activation details in the Information pane as shown in Figure 2-1.

You see the System dialog box as shown in Figure 2-2. 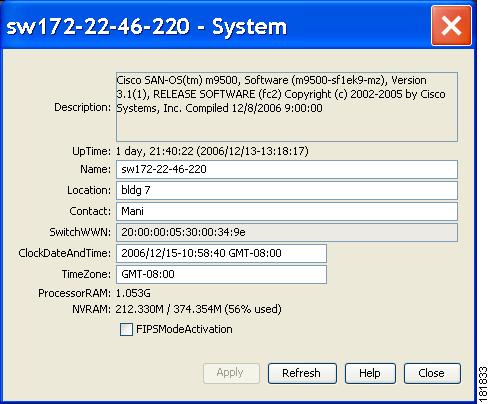 Pair-wise consistency test—This test is run when a public-private key-pair is generated.