This chapter provides these topics about the Cisco 2520 Connected Grid Switch switch software:

In this document, IP refers to IP Version 4 (IPv4) unless otherwise specified as IPv6.

The switch ships with one of these software images installed:

The Cisco CGS 2520 switch has two different types of interfaces by default: network node interfaces (NNIs) to connect to the service provider network and user network interfaces (UNIs) to connect to customer networks. Some features are supported only on one of these port types. You can also configure enhanced network interfaces (ENIs). An ENI is typically a user-network facing interface and has the same default configuration and functionality as UNIs, but can be configured to support protocol control packets for Cisco Discovery Protocol (CDP), Spanning-Tree Protocol (STP), Link Layer Discovery Protocol (LLDP), and EtherChannel Link Aggregation Control Protocol (LACP) or Port Aggregation Protocol (PAgP).

The encrypted Secure Shell (SSH) feature listed in this section is available only on the cryptographic versions of the switch software image.

Up to 128 supported spanning-tree instances

Per-VLAN spanning-tree plus (PVST+) for balancing load across VLANs

The switch provides security for the subscriber, the switch, and the network.

The Kerberos feature listed in this section is only available on the cryptographic version of the switch software.

VLAN assignment for restricting 802.1x-authenticated users to a specified VLAN

802.1x readiness check to determine the readiness of connected end hosts before configuring 802.1x on the switch

Network Edge Access Topology (NEAT) with 802.1x switch supplicant, host authorization with Client Information Signalling Protocol (CISP), and auto enablement to authenticate a switch outside a wiring closet as a supplicant to another switch

WTD to adjust queue size for a specified traffic class

Layer 3 features are only available when the switch is running the IP services image.

These features are available only when the switch is running the IP services image.

The switch is designed for plug-and-play operation; you only need to assign basic IP information to the switch and connect it to the other devices in your network. If you have specific network needs, you can change the interface-specific and system-wide settings.

If you do not configure the switch at all, the CGS 2520 switch operates with the default settings shown in Table 1-1 .

Cisco CGS 2520 switches are specifically designed for use in transmission and distribution (T&D) power substations. Figure 1-1 shows a partially redundant, multiservice configuration for deployment in a utility substation environment. A substation router such as a Cisco CGR 2010 router defines the electronic security perimeter (ESP) for the substation. The station bus network and multiservice network are located behind the substation router. The station bus network employs a ring topology for a resilient, redundant network and connects to different substation devices such as intelligent electronic devices (IEDs). The multiservice network is virtually segmented from critical supervisory control and data acquisition (SCADA) control traffic and supports services such as remote workforce management, physical security, and field area network (FAN) aggregation. Advanced quality of service (QoS) capabilities support mission-critical substation traffic such as SCADA and generic object oriented substation events (GOOSE) messages, and ensures that substation network traffic is prioritized ahead of the multiservice network traffic. 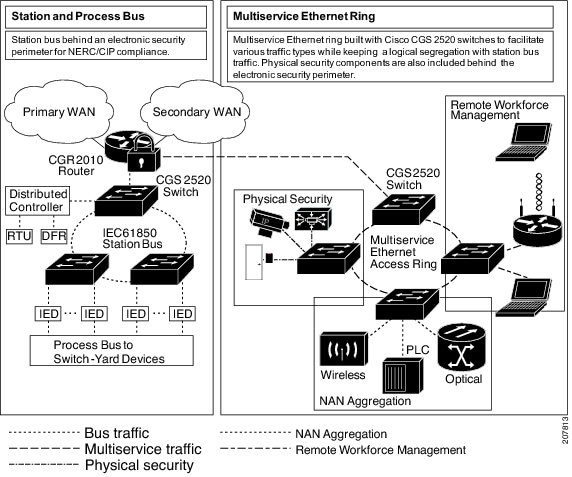 Before configuring the switch, review these sections for startup information: