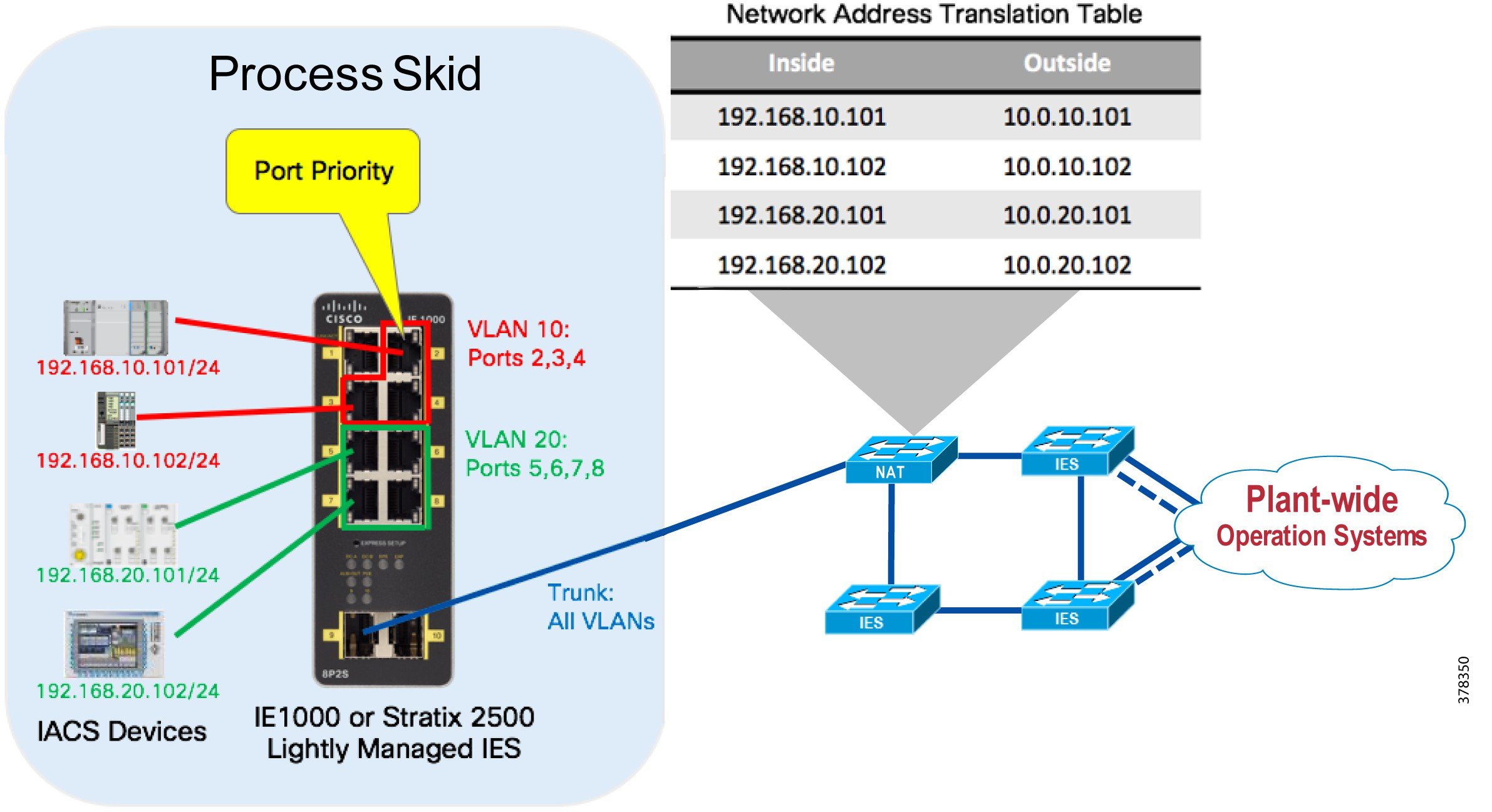 To segment the switch's ports into different VLANs, first use the Device Manager to create the VLANs by navigating to Configure > Network > VLAN Management in Device Manager. Then click Add to create a single VLAN, or a range of multiple VLANs. In this example, two VLANs are created: VLAN 10 and VLAN 20. These VLANs are used to separate the IACS devices attached to each VLAN from communicating with each other at Layer 2. In order for the devices to communicate, the packets between them would need to pass a Layer 3 boundary using a router or a Layer 3 IES, which provides a central place to enforce security policies such as access control lists. In many cases, lightly managed IES will use a basic configuration with a single VLAN, however this example illustrates what is possible with the lightly managed IES.

After the VLANs are created, you can see that, by default, all VLANs are assigned to all ports. The next step is assign a single VLAN to each physical port that connects to one of the IACS devices. This is accomplished by navigating to Configure > Network > Port Settings in the Device Manager. From there, select a single port, click Edit, and change the Administrative Mode to Access, and the Access VLAN to either VLAN 10 or VLAN 20. In this example (and as shown in Figure X), ports 2 through 4 are assigned to VLAN 10, and ports 5 through 8 are assigned to VLAN 20. Port 1 is left in VLAN 1 (the default) because, in this case, it is being used to connect to the management network in order to administer the switch.

The available administrative modes are described below, including a hybrid mode, which may be new to people familiar with typical managed switch configuration.

Hybrid mode is only recommended for PROFINET IACS traffic. In the next screen capture, going back to the VLAN Management page shows that each of the two new VLANs is assigned to the appropriate physical ports. Note that ports G1/9 and G1/10 are listed for all three VLANs—this is because these physical ports have not yet been configured and are still in the Hybrid mode (which is the default Administrative Mode). In order for the lightly managed IES to forward traffic for all of its VLANs to upstream fully managed IES over a single physical port, a trunk is used. This trunk maintains separation of the VLANs by tagging each frame with an IEEE 802.1Q VLAN ID. When the fully managed IES receives a frame with the tagged VLAN ID, it is able to determine to which VLAN the frame should be forwarded.

Trunks are configured on the Port Settings page of Device Manager. In Figure 3-5, both interfaces Gi 1/9 and Gi 1/10 are configured as trunks; however, typically just a single interface would be connected to an upstream fully managed IES, unless EtherChannel was used.

Depending on a variety of factors (including type and number of IACS devices and other endpoints), the industrial network can experience congestion at times. Congestion can lead to high latency and jitter, or even packet loss. When congestion does occur, the network needs to intelligently validate that the most critical traffic is not impacted.

Lightly managed IES support basic QoS for prioritizing important traffic that is not tolerant of latency, jitter or packet loss. QoS is implemented on the switches in the form of a port priority feature that is accessed by navigating to Configure > QoS. The port priority is simply configured by selecting one (or more) interfaces and then checking the Enable check box. In this example, an IACS device that is not tolerant of packet loss or latency is connected to port Fa 1/2.

The Port Priority feature should only be enabled on one, or possibly two, of the ports of the switch—those connected to critical devices that are not tolerant of latency, jitter or loss. If the feature is enabled on all ports, all ports will have the same priority, thus negating the intended benefit.

As shown in Figure 1-5, the lightly managed IES is connected to an upstream fully managed IES with NAT capability. In this example, the process skid containing the lightly managed IES and attached IACS devices is one of many such sub-zones. To simplify the network design and configuration, duplicate IP addressing is used in all of the sub-zones—192.168.10.x/24 and 192.168.20.x exist in multiple locations in the plant. In order for IACS devices in multiple sub-zones to coexist with overlapping IP addresses, network address translation (with multiple instances of NAT, on a per-VLAN basis) is configured on the upstream fully managed IES. This allows the overlapping addresses to be statically mapped to unique "outside" IP addresses reachable throughout the plant.

More information on “Deploying Network Address Translation within a Converged Plantwide Ethernet Architecture” can be found at the following URLs: