There are four main differences in the district office design:

The ASA Firewall Connection—The firewall connection to the Internet 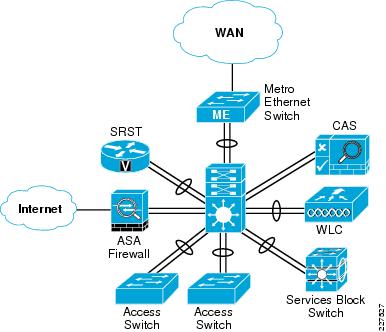 Table 11-1 shows an example of the port-channel configuration on the core/distribution 4500 Modular switch and the 3750 Metro Ethernet switch. This is a Layer-3 connection where both the core/distribution switch and the Metro Ethernet switch are part of the same EIGRP AS. The most significant difference in this configuration from the School design using the 4500 Modular switch is the difference in the QoS configuration on the 4500 interface; this is primarily due to the district office using hierarchical QoS features of a Supervisor 6 module, rather than the Supervisor 5 used in the School SRA.

The following is an example configuration of the Switch Virtual Interfaces configured on the core/distribution 4500 modular switch. This SVIs are trunked to the access switches as required, and access to the VLANs are controlled by the switchport trunk allowed vlan command applied on the port channels. The same basic configuration is used for the Server Switch.

Table 11-4 provides examples of the port-channel configuration on core/distribution 4500 modular switch and an access switch. A similar configuration would be applied to each access switch connection with the same or different VLANs as required. From an IP routing or services level there is no requirement to span the same VLAN to multiple switches, but if there is a requirement to support legacy protocols such as AppleTalk at the school these AppleTalk VLANs can be easily spanned to different access switches as required.

The WLC Connection to the Core/Distribution Stack is fundamentally the same as an Access Switch connection, with different VLANs, and the exception of using a different QoS trust mode, where the CoS values from the WLC, are trusted. Figure 7 shows an example of the configuration.

The NAC CAS connection to the core/distribution switch. This is not an EtherChannel connection, but two switch ports are consumed. The two ports consist of a untrusted port for connecting client VLANs to the CAS prior to them completing the NAC process, and a trusted port that connects the NAS to the client VLANs used once clients have successfully completed the NAC process. The two, trusted and untrusted, ports are required even if OOB NAC is used, as the CAS requires access to the trusted VLANs during the NAC process. The following is an example of the configuration.

The use of Network Time Protocol (NTP) to synchronize the clocks of network devices is a well established best practice, is fundamental for the analysis of logs/events and security, but might not warrant a mention in a design guide that is focused upon introducing new designs and practices to support new services in the network.

The preferred network device to act as the NTP server in the schools SRA is the ISR router at each site. The ISR is the preferred device as routers have a greater CPU capacity than switches used in the Schools SRA due to many of the general purpose task that a router may be required it perform in CPU, compared to switches that have been more optimized to perform their more limited number of tasks in ASIC.

Figure 11-2 shows a schematic of the NTP hierarchy in the school district.

For more information upon NTP refer to the Network Time Protocol: Best Practices White Paper at the following URL: 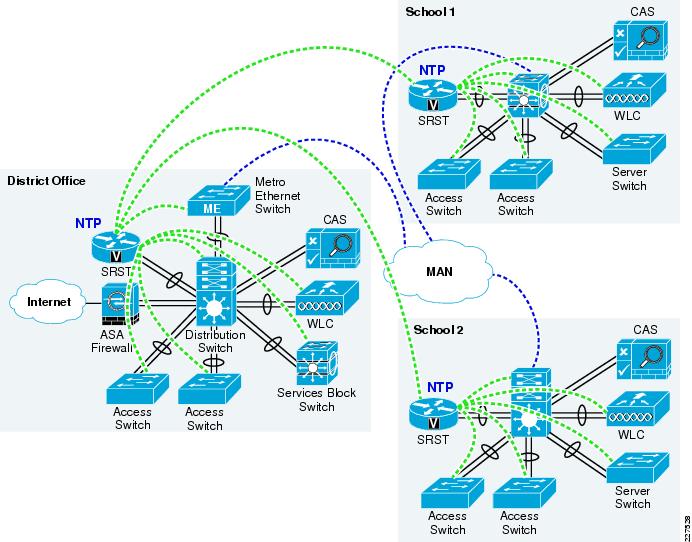 When creating the NTP configuration care should be taken to protect the NTP system.

The NTP associations should be limited, and controlled by an access list, to protect against DoS attacks. The NTP system should also use NTP authentication, where possible, to protected against spoofing attacks.