Note This guide does not describe the configuration and operation of the Cisco Video Surveillance (Cisco VSM) products or the deployment of the Cisco VSM virtual machine images on the Cisco UCS platforms. For more information on these subjects, see the “Related Documentation” section.

In some instances, existing network equipment and topologies have the necessary configuration and performance characteristics to support high-quality IP video surveillance. In other instances, network hardware might require upgrading or reconfiguration to support increased bandwidth needed to support video.

Figure 1 represents a virtualized VSM application running on a UCS B- and C- Series platform. 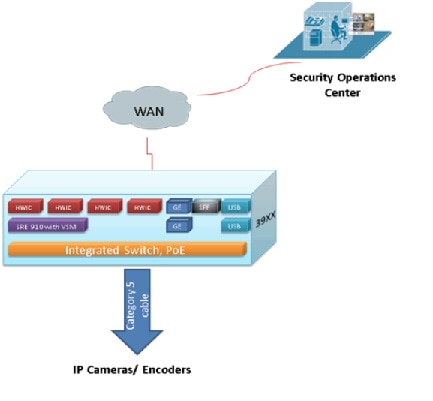 This guide assumes that the ESXi 5.0 Hypervisor is installed on the UCS server of SRE blade.

The required components for designing and deploying VSM on UCS B-and C–Series platforms include:

UCS Express and E-Series: This software runs on a Cisco ISR series SRE blade in a virtualized environment.

Figure 3 and Figure 4 illustrates the overall logical topology of the networking and video surveillance components, including a UCS B-Series containing the ESXi host running VSM and VSOM, various IP cameras, an external switch, and the operator workstations running the VSOM client. 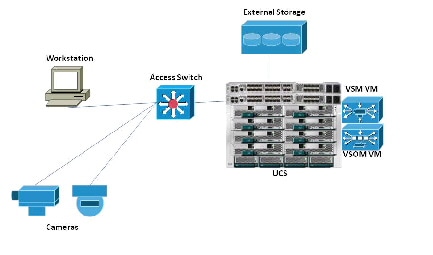 Describes the core capabilities and performance of a supported Video Surveillance Manager server for use when designing and deploying Cisco Physical Security solutions.

The usable storage is based on the redundant array of independent disks (RAID) level used. For more information, see the following:

For the UCS Express, consider dedicating the entire SRE 9xx for video surveillance.

Figure 5 illustrates the topology and application services deployed in an enterprise-wide implementation of IP-based video surveillance. 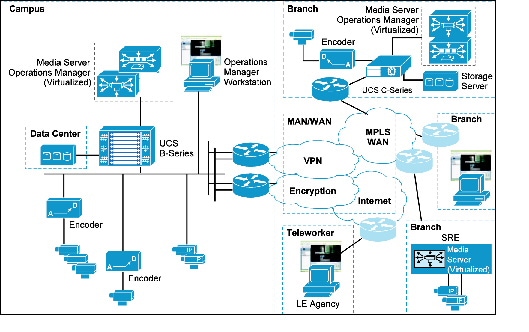 The branch locations are connected to the enterprise campus by WAN technologies, including Metro Ethernet, private line, the public Internet, or a Layer-2 or Layer-3 Multiprotocol Label Switching (MPLS) Virtual Private Network (VPN) deployment. With a Layer-2 MPLS deployments (Pseudowire), IP cameras can be Ethernet-attached to a remote switch and can transport images through the carrier network, provisioned and managed by the Video Surveillance Operations Manager, either at a branch location or a central location. Branches attached through a Layer-3 MPLS network, leased line, or over the Internet can support viewing stations and IP cameras that can be managed by either the campus or branch deployment.

Cisco technologies, such as Dynamic Multipoint Virtual Private Network (DMVPN), can be overlaid on to the WAN transport to provide data privacy and authentication by way of IP security (IPsec) encryption. To ensure the prioritization of voice, video, and mission-critical applications over the WAN, QoS is deployed on the WAN. Where multiple WAN links exist, Performance Routing (PfR) can be enabled to provide intelligent path selection and the ability to route around brownouts and transient failures, thereby enhancing what can be provided by traditional routing protocols, such as the Enhanced Internal Gateway Routing Protocol (EIGRP).

The decision as to whether a specific environment should implement the Cisco Video Surveillance on UCS Express or E-Series platforms at a branch location and archive data at the branch—or provision cameras off the campus implementation of the Cisco Video Surveillance Manager—depends on the number of cameras, the resolution, frame or bit rate of the camera, quality factors of the cameras, and the bandwidth cost and availability at the remote locations.

Figure 6 illustrates how a remote branch office relies on the connectivity provided by a WAN service provider.

These inherent bandwidth constraints require careful evaluation of the placement of cameras and Media Servers, and how many viewers can be supported at remote sites simultaneously. By using child proxies, bandwidth requirements can be reduced to transport video streams across WAN connections.

The placement of recording devices also becomes important. The video can be streamed to a central site using lower frame rates or resolution, but another attractive alternative is to deploy Media Servers at the remote sites and stream the traffic using the LAN connectivity within the remote site.

A point-to-point or leased line is a link from a primary site to a remote site using a connection through a carrier network. The link is considered private and is used exclusively by the customer. The circuit usually is priced based on the distance and bandwidth requirements of the connected sites.

Technologies, such as Multilink Point-to-Point Protocol (PPP), allow several links to be bundled to appear as a single link to upper routing protocols. In this configuration, several links can aggregate their bandwidth and be managed with only one network address. Because video surveillance traffic requirements tend to be larger than other IP voice and data applications, this feature is attractive for video surveillance applications.

Hub-and-spoke, also known as star topology, relies on a central site router that acts as the connection for other remote sites. Frame Relay uses a hub-and-spoke topology predominantly due to its cost benefits, but other technologies, such as Multiprotocol Label Switching (MPLS), have mostly displaced Frame Relay.

Figure 7 and Figure 8 illustrate a simple scenario with two sites. Each site has a Media Server and each is the direct proxy for an IP camera. Three video monitoring workstations are active in Site A and each IP camera generates 1 Mbps of network traffic. 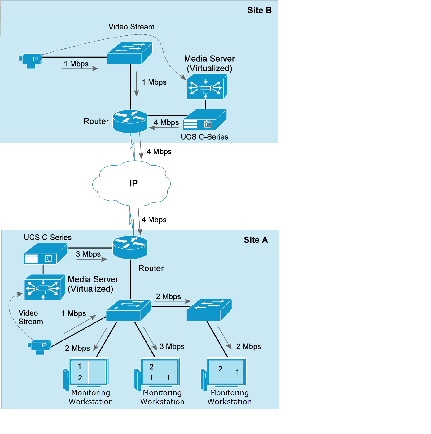 Note For simplicity, the Operations Manager has been removed from Figure 7 and Figure 8. 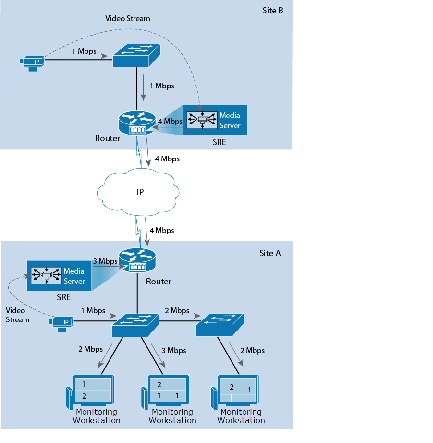 In this example, Site A and Site C have Media Servers acting as direct proxies and archives for the IP cameras. Because both sites archive and distribute video to the monitoring workstations locally, the network traffic remains local to each site.

Figure 9 UCS B- and C- Series: Sites with Remote Storage 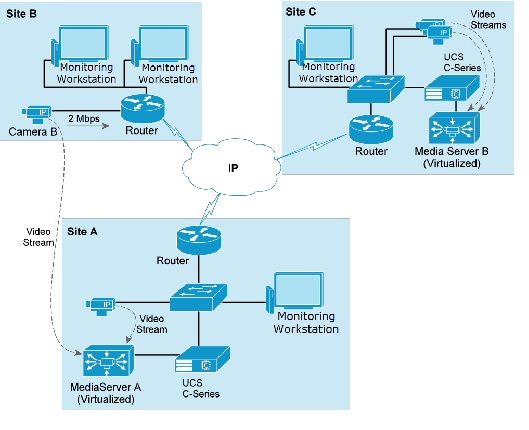 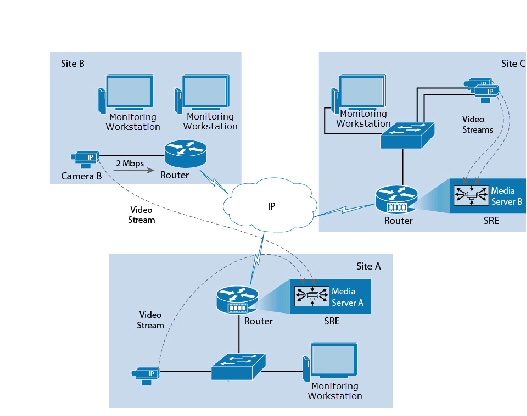 Figure 11 and Figure 12 display a deployment with several remote sites, each with a local Media Server acting as the direct proxy and archive for local IP cameras. In this scenario, all recording occurs at the remote sites and live video streams are viewed by OM viewers and VM monitors (video walls) at the headquarters. 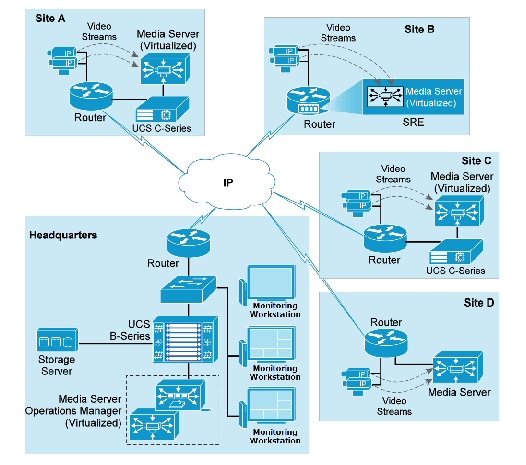 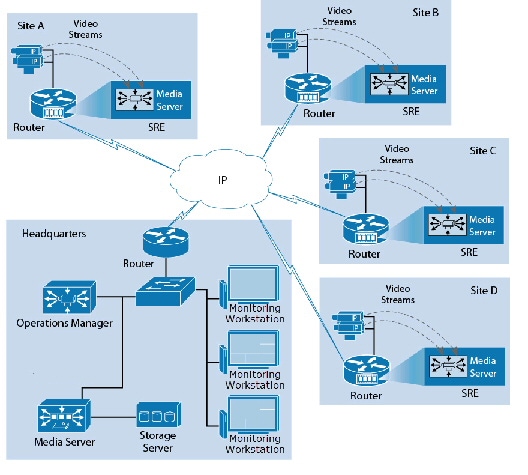 Use one of the following methods to access the Cisco Video Surveillance (Cisco VSM) documentation:

Cisco and the Cisco logo are trademarks or registered trademarks of Cisco and/or its affiliates in the U.S. and other countries. To view a list of Cisco trademarks, go to this URL: www.cisco.com/go/trademarks . Third-party trademarks mentioned are the property of their respective owners. The use of the word partner does not imply a partnership relationship between Cisco and any other company. (1110R)