In order for the kcd-server command to function, the ASA must establish a trust relationship between the source domain (the domain where the ASA resides) and the target or resource domain (the domain where the Web services reside). The ASA, using its unique format, crosses the certification path from the source to the destination domain and acquires the necessary tickets on behalf of the remote access user to access the services.

Kerberos relies on a trusted third party to validate the digital identity of entities in a network. These entities (such as users, host machines, and services running on hosts) are called principals and must be present in the same domain. Instead of secret keys, Kerberos uses tickets to authenticate a client to a server. The ticket is derived from the secret key and consists of the client’s identity, an encrypted session key, and flags. Each ticket is issued by the key distribution center and has a set lifetime.

The Kerberos security system is a network authentication protocol used to authenticate entities (users, computers, or applications) and protect network transmissions by scrambling the data so that only the device that the information was intended for can decrypt it. You can configure KCD to provide Clientless SSL VPN users with SSO access to Microsoft Web services protected by Kerberos. Supported Web services or applications include Outlook Web Access (OWA), Sharepoint, and Internet Information Server (IIS).

Note Web services from providers other than Microsoft are not currently supported.

For more information on constrained delegation, see RFC 1510 via the IETF website ( http://www.ietf.org ).

Figure 16-1 depicts the packet and process flow a user will experience directly and indirectly when accessing resources trusted for delegation via the clientless portal. This process assumes that the following tasks have been completed: 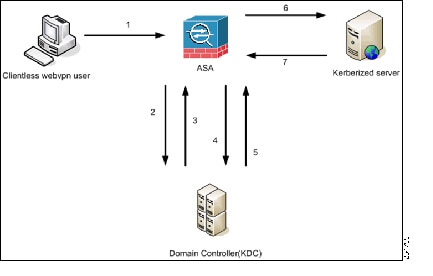 Note A clientless user session is authenticated by the ASA using the authentication mechanism configured for the user. (In the case of smartcard credentials, ASA performs LDAP authorization with the userPrincipalName from the digital certificate against the Windows Active Directory).

Note KCD for Clientless SSL VPN is supported for all authentication methods (RADIUS, RSA/SDI, LDAP, digital certificates, and so on). Refer to the AAA Support table at http://www.cisco.com/en/US/docs/security/asa/asa84/configuration/guide/access_aaa.html#wp1069492.

3. The key distribution center returns the requested tickets to the ASA. Even though these tickets are passed to the ASA, they contain the user’s authorization data.ASA requests a service ticket from the KDC for the specific service that the user wants to access.

Note Steps 1 to 3 comprise protocol transition. After these steps, any user who authenticates to ASA using a non-Kerberos authentication protocol is transparently authenticated to the key distribution center using Kerberos.

4. ASA requests a service ticket from the key distribution center for the specific service that the user wants to access.

5. The key distribution center returns a service ticket for the specific service to the ASA.

6. ASA uses the service ticket to request access to the Web service.

To configure the ASA for cross-realm authentication, you must use the following commands.

To have the ASA join a Windows Active Directory domain and return a success or failure status, perform these steps.

To display the domain controller information and the domain join status, perform this step.

To display all Kerberos tickets cached on the ASA, enter the following commands:

To clear all Kerberos ticket information on the ASA, perform these steps.

When creating a bookmark to an application that uses Kerberos constrained delegation (KCD), do not check Enable Smart Tunnel.

Clientless SSL VPN includes an Application Profile Customization Framework (APCF) option that lets the ASA handle non-standard applications and Web resources so they display correctly over a Clientless SSL VPN connection. An APCF profile contains a script that specifies when (pre, post), where (header, body, request, response), and what (data) to transform for a particular application. The script is in XML and uses sed (stream editor) syntax to transform strings/text.

You can store APCF profiles on the ASA flash memory, or on an HTTP, HTTPS, or TFTP server.

We recommend that you configure an APCF profile only with the assistance of Cisco personnel.

APCF profiles use XML format, and sed script syntax, with the XML tags in Table 16-1 .

Misuse of an APCF profile can result in reduced performance and undesired rendering of content. In most cases, Cisco Engineering supplies APCF profiles to solve specific application rendering issues.

With encoding, you can view or specify the character encoding for Clientless SSL VPN portal pages.

Character encoding , also called “character coding” and “a character set,” is the pairing of raw data (such as 0s and 1s) with characters to represent the data. The language determines the character encoding method to use. Some languages use a single method, while others do not. Usually, the geographic region determines the default encoding method used by the browser, but the remote user can change it. The browser can also detect the encoding specified on the page, and render the document accordingly.

The encoding attribute lets you specify the value of the character-encoding method used on the portal page to ensure that the browser renders it properly, regardless of the region in which the user is using the browser, and regardless of any changes made to the browser.

By default, the ASA applies the “Global Encoding Type” to pages from Common Internet File System servers. The mapping of CIFS servers to their appropriate character encoding, globally with the “Global Encoding Type” attribute, and individually with the file-encoding exceptions displayed in the table, provides for the accurate handling and display of CIFS pages when the proper rendering of filenames or directory paths, as well as pages, is an issue.

Step 1 Global Encoding Type determines the character encoding that all Clientless SSL VPN portal pages inherit except for those from the CIFS servers listed in the table. You can type the string or choose one of the options from the drop-down list, which contains the most common values, as follows:

Note If you click none or specify a value that the browser on the Clientless SSL VPN session does not support, it uses its own default encoding.

Step 2 Enter the name or IP address of a CIFS server for which the encoding requirement differs from the “Global Encoding Type” attribute setting. The ASA retains the case you specify, although it ignores the case when matching the name to a server.

Step 3 Choose the character encoding that the CIFS server should provide for Clientless SSL VPN portal pages. You can type the string, or choose one from the drop-down list, which contains only the most common values, as follows:

If you click none or specify a value that the browser on the Clientless SSL VPN session does not support, it uses its own default encoding.

email clients such as MS Outlook, MS Outlook Express, and Eudora lack the ability to access the certificate store.

Step 1 Enter the URL of the email service into the address field or click an associated bookmark in the Clientless SSL VPN session.

Step 2 When prompted, enter the email server username in the format domain\username.