This chapter describes how to configure the ASA for Cisco Unified Communications Mobility Advantage Proxy features.

To support Cisco UMA for the Cisco Mobility Advantage solution, the mobility advantage proxy (implemented as a TLS proxy) includes the following functionality: 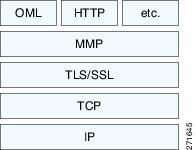 The TCP/TLS default port is 5443. There are no embedded NAT or secondary connections.

Cisco UMA client and server communications can be proxied via TLS, which decrypts the data, passes it to the inspect MMP module, and re-encrypt the data before forwarding it to the endpoint. The inspect MMP module verifies the integrity of the MMP headers and passes the OML/HTTP to an appropriate handler. The ASA takes the following actions on the MMP headers and data:

4096 is the value currently used in MMP implementations.

Because MMP headers and entities can be split across packets, the ASA buffers data to ensure consistent inspection. The SAPI (stream API) handles data buffering for pending inspection opportunities. MMP header text is treated as case insensitive and a space is present between header text and values. Reclaiming of MMP state is performed by monitoring the state of the TCP connection.

Figure 17-2 and Figure 17-3 show the two deployment scenarios for the TLS proxy used by the Cisco Mobility Advantage solution. In scenario 1 (the recommended deployment architecture), the ASA functions as both the firewall and TLS proxy. In scenario 2, the ASA functions as the TLS proxy only and works with an existing firewall. In both scenarios, the clients connect from the Internet. 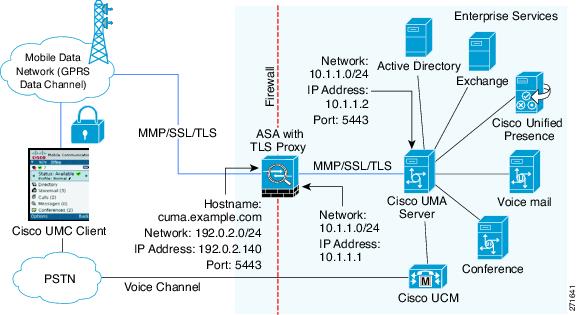 This interface PAT rule converges the Cisco UMA client IP addresses on the outside interface of the ASA into a single IP address on the inside interface by using different source ports. Performing this action is often referred as “outside PAT”. “Outside PAT” is not recommended when TLS proxy for Cisco Mobility Advantage is enabled on the same interface of the ASA with phone proxy, Cisco Unified Presence, or any other features involving application inspection. “Outside PAT” is not supported completely by application inspection when embedded address translation is needed. 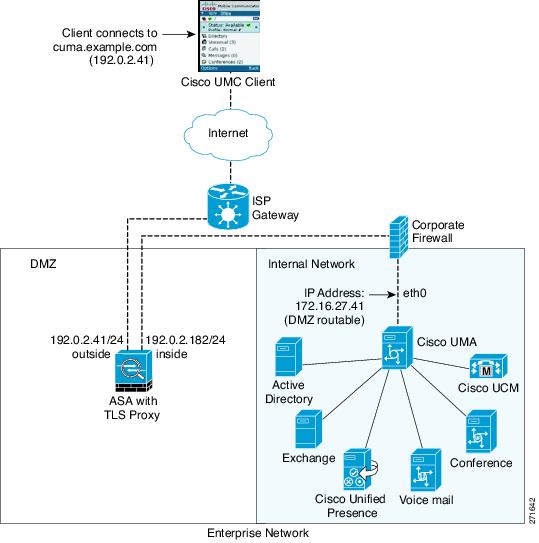 In both scenarios (Figure 17-2 and Figure 17-3), NAT can be used to hide the private address of the Cisco UMA servers.

In scenario 2 (Figure 17-3), PAT can be used to converge all client traffic into one source IP, so that the firewall does not have to open up a wildcard pinhole for inbound traffic. 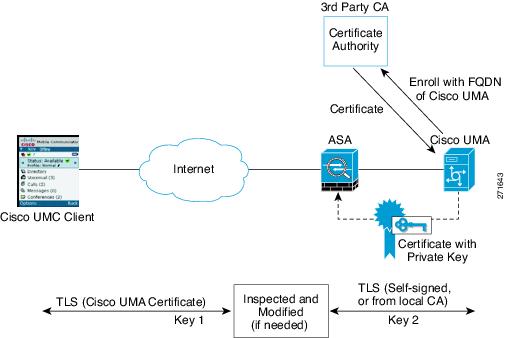 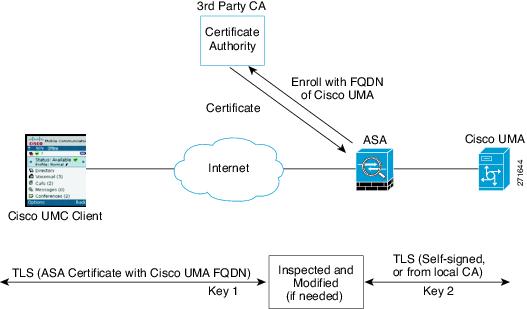 This feature is not available on No Payload Encryption models.

This section includes the following topic:

To configure for the ASA to perform TLS proxy and MMP inspection as shown in Figure 17-2 and Figure 17-3, perform the following tasks.

It is assumed that self-signed certificates are used between the ASA and the Cisco UMA server.

The wizard automatically creates the necessary TLS proxy, then guides you through creating the Unified Presence Proxy instance, importing and installing the required certificates, and finally enables the MMP inspection for the Mobility Advantage traffic automatically.

The wizard guides you through four steps to create the Mobility Advantage Proxy:

Specify setting to define the proxy topology, such the IP address of the Mobility Advantage server.

Configure the server-side certificate management, namely the certificates that are exchanged between the local Mobility Advantage server and the ASA.

Configure the client-side certificate management, namely the certificates that are exchanged between the Unified Mobile Communicator and the ASA

Table 17-1 lists the release history for this feature.