To enable debugging and syslog messages, perform the following steps:

To ping the ASA interfaces, perform the following steps:

Step 1 Draw a diagram of your single-mode ASA or security context that shows the interface names, security levels, and IP addresses.

Note Although this procedure uses IP addresses, the ping command also supports DNS names and names that are assigned to a local IP address with the name command.

The diagram should also include any directly connected routers and a host on the other side of the router from which you will ping the ASA. You will use this information in this procedure and in the procedure in the “Passing Traffic Through the ASA” section. (See Figure 24-1.) 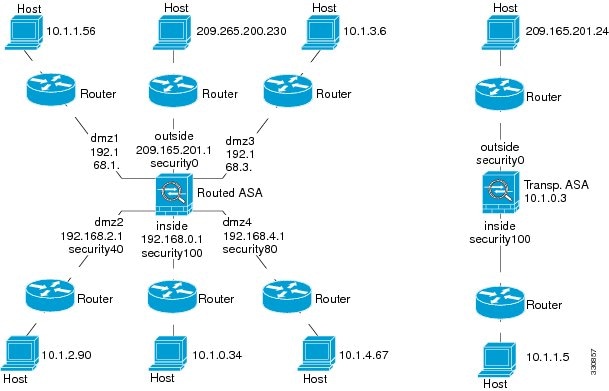 Step 2 Ping each ASA interface from the directly connected routers. For transparent mode, ping the management IP address. This test ensures that the ASA interfaces are active and that the interface configuration is correct.

A ping might fail if the ASA interface is not active, the interface configuration is incorrect, or if a switch between the ASA and a router is down (see Figure 24-2). In this case, no debugging messages or syslog messages appear, because the packet never reaches the ASA.

If the ping reply does not return to the router, then a switch loop or redundant IP addresses may exist (see Figure 24-3).

A ping might fail if the ASA does not have a return route to the host through the intermediate router (see Figure 24-4). In this case, the debugging messages show that the ping was successful, but syslog message 110001 appears, indicating a routing failure has occurred.

After you successfully ping the ASA interfaces, make sure that traffic can pass successfully through the ASA. By default, you can ping from a high security interface to a low security interface. You just need to enable ICMP inspection to allow returning traffic through. If you want to ping from high to low, then you need to apply an ACL to allow traffic. If you use NAT, this test shows that NAT is operating correctly.

Note The ASA only shows ICMP debugging messages for pings to the ASA interfaces, and not for pings through the ASA to other hosts.

You can monitor the processes that run on the CPU. You can obtain information about the percentage of CPU that is used by a certain process. CPU usage statistics are sorted in descending order to display the highest consumer at the top. Also included is information about the load on the CPU per process, at 5 seconds, 1 minute, and 5 minutes before the log time. This information is updated automatically every 5 seconds to provide real-time statistics.

You can use the show process cpu-usage sorted command to find a breakdown of the process-related load-to-CPU that is consumed by any configured contexts.