Information About the 4-Port Serial GRWIC

Connecting the 4-Port Serial GRWIC to the Network

Restrictions for the 4-Port Serial GRWIC

Information About the 4-Port Serial GRWIC

Utilities commonly have legacy equipment that communicates over relatively slow serial links. The 4-port serial GRWIC helps customers to enable applications such as legacy protocol transport, console server, and dial access server. Combining a high-density serial GRWIC with the CGR 2010 enables energy networks to collect and transport data from a Supervisory and Data Acquisition (SCADA) system over an IP network.

Table 1 summarizes the hardware specifications of the 4-port serial GRWIC supported on the CGR 2010.

Table 2 lists the environmental specifications for the 4-port serial GRWIC.

Figure 2 shows the front panel of the 4-port serial GRWIC. 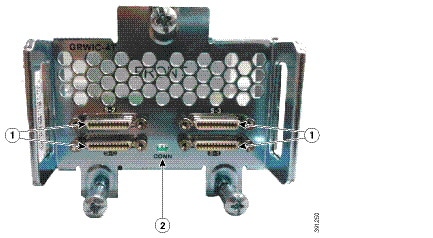 Figure 2 shows that the 4-port serial GRWIC has one LED, labeled CONN, for ports 0-3. The LED lights when the serial port is connected. When the port is in DTE mode, the CONN LED indicates that Data Send Ready (DSR), Data Carrier Detect (DCD), and Clear To Send (CTS) have been detected. When the port is in DCE mode, Data Terminal Ready (DTR) and Ready To Send (RTS) have been detected. Table 3 describes the functions of the LEDs.

The interface cables for the 4-port serial GRWIC are rated for -4 degrees F (-20 degrees C) to 167 degrees F (75 degrees C). At -40C (the low end of the operating temperature range of the CGR 2010), the smart serial cable will perform optimally provided that the following conditions are met:

For information about connecting the cables, see “Connecting the 4-Port Serial GRWIC to the Network” section.

This section describes how to install the 4-port serial GRWIC in the CGR 2010 and includes the following topics:

This section includes the basic installation warning statements for the 4-port serial GRWIC. For regulatory compliance and safety information for the CGR 2010, refer to the Connected Grid Router 2000 Series Regulatory Compliance and Safety Information document.

Warning Only trained and qualified personnel should be allowed to install, replace, or service this equipment. Statement 1030

Warning Do not work on the system or connect or disconnect cables during periods of lightning activity. Statement 1001

Warning Read the installation instructions before connecting the system to the power source. Statement 1004

Warning Hazardous network voltages are present in WAN ports regardless of whether power to the unit is OFF or ON. To avoid electric shock, use caution when working near WAN ports. When detaching cables, detach the end away from the unit first. Statement 1026

You can install the 4-port serial GRWIC into one of four slots on the cable side of the router.

Follow these steps to install a 4-port serial GRWIC in a CGR 2010:

Step 1 Stand the GRWIC on end to install into the router slot. (See Figure 3.)

Figure 3 GRWIC Positioning to Install into the GCR 2010 Router 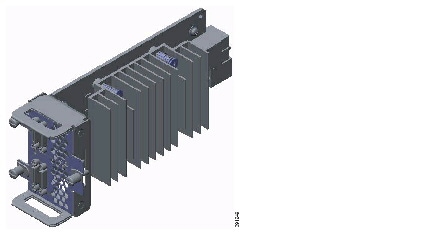 Step 2 Slide the GRWIC into the router slot. (See Figure 4.)

Figure 4 Proper Installation of a GRWIC 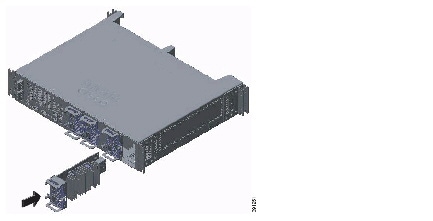 Step 3 Tighten the three captive screws on the front of the interface card.

To remove a 4-port serial GRWIC from a CGR 2010, perform these steps:

Step 2 Gently pull the module out of the slot.

Connecting the 4-Port Serial GRWIC to the Network

To connect the 4-port serial GRWIC to the network, follow these steps:

Step 1 Connect the serial cable to the connector on the GRWIC faceplate. (See Figure 5.)

Step 2 Secure the thumb screws on the cable to the GRWIC faceplate. (See Figure 5.) 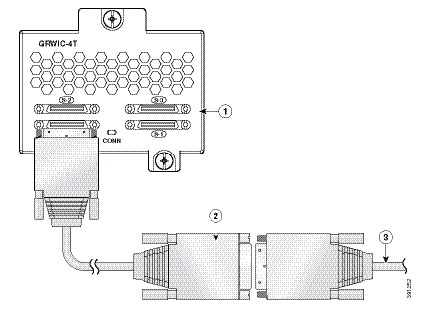 Step 3 Route the serial cable using a cable management system, such as a vertical cable manager, to ensure that the weight of the cable is supported (see Figure 6). Allow a short length (3 to 6 inches) of the cable to exit perpendicular to the connector.

Step 5 Connect the other end of the cable to the DTE or DCE.

Restrictions for the 4-Port Serial GRWIC

You can configure an interface operating in DCE mode to ignore incoming Data Terminal Ready (DTR) or Ready to Send (RTS) signals. When you configure the ignore [ dtr | rts ] command, a signal is automatically seen as asserted.

To configure the interface to ignore DTR and RTS signals, perform the following steps:

To configure a loopback test to test the connectivity, perform the following steps:

This example shows the output from the show interfaces command for a serial interface:

The following example shows a Frame Relay configuration between routers UUT-1 and UUT-2:

Verify ping works to the other end, and verify the output of the following show commands:

The following example shows the configuration for DDR:

You can access Cisco Feature Navigator by going to http://www.cisco.com/go/cfn. An account on Cisco.com is not required.

Table 5 lists the release history for this feature.

Subscribe to What’s New in Cisco Product Documentation , which lists all new and revised Cisco technical documentation, as an RSS feed and deliver content directly to your desktop using a reader application. The RSS feeds are a free service.

This document is to be used in conjunction with the documents listed in the “Related Documents” section.

Cisco and the Cisco logo are trademarks or registered trademarks of Cisco and/or its affiliates in the U.S. and other countries. To view a list of Cisco trademarks, go to this URL: www.cisco.com/go/trademarks . Third-party trademarks mentioned are the property of their respective owners. The use of the word partner does not imply a partnership relationship between Cisco and any other company. (1110R)

No combinations are authorized or intended under this document.