This module describes how to implement SSL.

The Secure Socket Layer (SSL) protocol and Transport Layer Security (TLS) are application-level protocols that provide for secure communication between a client and server by allowing mutual authentication, the use of hash for integrity, and encryption for privacy. SSL and TLS rely on certificates, public keys, and private keys.

The following prerequisites are required to implement Secure Shell:

The following are some basic SSH restrictions and limitations of the SFTP feature:

To implement SSH, you should understand the following concepts:

The SSH server feature enables an SSH client to make a secure, encrypted connection to a Cisco router. This connection provides functionality that is similar to that of an inbound Telnet connection. Before SSH, security was limited to Telnet security. SSH allows a strong encryption to be used with the Cisco IOS XR software authentication. The SSH server in Cisco IOS XR software works with publicly and commercially available SSH clients.

If not configured, the default DSCP value set in packets is 16 (for both client and server).

The SFTP client functionality is provided as part of the SSH component and is always enabled on the router. Therefore, a user with the appropriate level can copy files to and from the router. Like the copy command, the sftp command can be used only in EXEC mode.

The SFTP client is VRF-aware, and you may configure the secure FTP client to use the VRF associated with a particular source interface during connections attempts. The SFTP client also supports interactive mode, where the user can log on to the server to perform specific tasks via the Unix server.

The SFTP requests for a new SFTP server in the following steps:

Once the initialization occurs, the SFTP server waits for the SSH_FXP_INIT message from the client, which is essential to start the file communication session. This message may then be followed by any message based on the client request. Here, the protocol adopts a 'request-response' model, where the client sends a request to the server; the server processes this request and sends a response.

Verifying the authenticity of a server is the first step to a secure SSH connection. This process is called the host authentication, and is conducted to ensure that a client connects to a valid server.

The host authentication is performed using the public key of a server. The server, during the key-exchange phase, provides its public key to the client. The client checks its database for known hosts of this server and the corresponding public-key. If the client fails to find the server's IP address, it displays a warning message to the user, offering an option to either save the public key or discard it. If the server’s IP address is found, but the public-key does not match, the client closes the connection. If the public key is valid, the server is verified and a secure SSH connection is established.

The user generates an RSA public-private key pair on a unix client using a standard key generation mechanism such as ssh-keygen. The max length of the keys supported is 4096 bits, and the minimum length is 512 bits. The following example displays a typical key generation activity:

The public key must be in base64 encoded (binary) format for it to be imported correctly into the box. You can use third party tools available on the Internet to convert the key to the binary format.

If a public key is not imported to a router using the RSA method, the SSH server initiates the password based authentication. If a public key is imported, the server proposes the use of both the methods. The SSH client then chooses to use either method to establish the connection. The system allows only 10 outgoing SSH client connections.

Currently, only SSH version 2 and SFTP server support the RSA based authentication. For more information on how to import the public key to the router, see the Implementing Certification Authority Interoperability on the Cisco ASR 9000 Series Router chapter in this guide.

How to Implement Secure Shell

To configure SSH, perform the tasks described in the following sections:

Perform this task to configure SSH.

Perform this task to configure an SSH client.

This example shows how to configure SSHv2 by creating a hostname, defining a domain name, enabling the SSH server for local and remote authentication on the router by generating a DSA key pair, bringing up the SSH server, and saving the configuration commands to the running configuration file.

After SSH has been configured, the SFTP feature is available on the router.

Restrictions for Multi-channeling Over SSH

The figure below provides an illustration of a client-server interaction over a SSH multichannel connection. 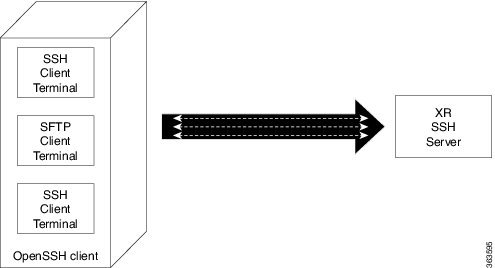 As depicted in the illustration,

The SSH client opens up one TCP socket for all the connections. In order to do so, the client multiplexes all the connections into one TCP connection. Authentication happens only once at the time of creating the session. After that, all the SSH clients associated with the particular session uses the same TCP socket to communicate to the server. Use the following steps to configure client multiplexing using OpenSSH: