Cisco EPN Manager provides several ways to see, at a glance, if there are any problems with circuits/VCs:

Identify Which Circuits/VCs are Affected by a Specific Fault

To identify which circuits/VCs are affected by a specific fault:

Get More Information About a Circuit/VC Failure

To view additional information about a circuit/VC provisioning failure from the Circuits/VCs table:

Cisco EPN Manager provides the ping and traceroute features to troubleshoot service failures. You can use OAM commands to access these features and monitor the connectivity and path between two endpoints in a service. You can then isolate and resolve the failure. The technologies that are supported for the different IOS devices are:

The launch points for the OAM command vary based on:

You can perform ping or traceroute using the OAM commands to troubleshoot a service failure. See Perform a Ping or Traceroute Using OAM Command

If you are launching OAM command from the Service/Circuit 360, the service type is the criteria that determines the technology that is supported. See Overview of Circuit/VC Discovery and Provisioning to know in detail about the different service types.

To launch OAM command from Circuit 360:

If you are launching OAM command from the alarm browser, the event type is the criteria that determines the technology that is supported.

To launch OAM command from an alarm browser:

To perform a ping or traceroute or multipath (only for SR) using OAM command:

The results of the ping, traceroute and multipath commands are displayed in the following formats:

Use EOAM Templates to Troubleshoot EVCs

Run a Performance Test on a Circuit/VC

When you run a performance test, Cisco EPN Manager connects to the network elements to provide real-time data. To get historical information, see View Performance Metrics and Reports for Circuits/VCs.

Performance Test Based on Y.1564 for EVCs

The Y.1564 Ethernet service activation or performance test methodology allows turning up, installing, and troubleshooting Ethernet-based services. Using this test, you can verify the service configuration and performance from UNI to UNI. This ensures that the SLA will be met according to the bandwidth profile purchased, and the promised class of service.

These tests provide complete validation of Ethernet service-level agreements (SLAs) in a single test. Using a traffic generator performance profile, you can create the traffic based on your requirements. The network performance, such as throughput, loss, and availability, are analyzed using Layer 2 traffic with various bandwidth profiles.

To run a Y.1564 performance test on an EVC, do the following:

If you want to run a Y.1564 performance test on an EVC that resides on a ME1200 device, enter the following QoS configuration on both the source and destination interfaces before you run the test:

Performance Test Based on Y1731 for EVCs

Following are the prerequisites that must be met before you run a performance test based on Y.1731 for a circuit/VC:

Cisco EPN Manager performance test for optical circuits is based on the ITU-T recommendations as defined in G.709 and G.798.

Optical Performance Monitoring Parameters monitor the quality of optical signals and are used to measure the average optical power transmitted and received between end points in optical circuits. From these measurements, you can derive critical network performance parameters such as channel presence verification, channel wavelength, ASE noise, optical signal power, and optical signal to noise ratio (OSNR) per channel. You can then use these parameters to manage the network reliability and quality of service.

Follow the steps below to view the performance monitoring parameters for an optical circuit:

PRBS test is supported for OTN Circuits of type ODU UNI. PRBS bit error count measures the reliability of the link between the endpoints. This test is supported for NCS4K-20T-O-S cards. When PRBS test is run between 2 endpoints (ODU Controller or sub-controller), the source device sends a bit pattern through one or more midpoints (intermediate controller or sub-controller) and the same bit pattern is received by the destination device, the test results can be viewed from both the endpoints. You can also run the PRBS test on a controller, configuring the other endpoint as a loopback, source, or source-sink.

For information on configuring PRBS on an ODU controller, see Configure PRBS on ODU Controllers.

To run a PRBS performance test for an optical circuit:

Bit error rate test (BERT) allows you to test cables and diagnose signal problems in the field. This testing mechanism is supported on the Cisco NCS 42xx Series (T1/E1 Ports and T3/E3 Ports). This test generates a specific pattern on to the outgoing data stream of a circuit controller and then analyzes the incoming data stream for the same pattern. The bits that do not match the expected pattern are counted as bit errors.

To run a BERT performance test for a CEM circuit:

You can export the results of a BERT performance test by clicking the Export icon at the top right corner of the Test and History tabs of the BERT page (from the Circuit/VC 360 view, choose Actions > Performance Test > BERT).

You can also export the list of BERT performance tests from the following pages:

The Circuit/VC 360 view provides information about the circuit's recent history. Reports, on the other hand, can retrieve all historical data stored in the database. For real-time information, run a performance test (see Run a Performance Test on a Circuit/VC).

Use Performance Reports to Monitor and Troubleshoot Circuits/VCs

Cisco EPN Manager provides extensive reporting capabilities that enable you to retrieve in-depth performance information for optical circuits and EVCs. The Report Launch Pad provides access to all Cisco EPN Manager reports. From the Report Launch Pad, you can create and save new reports, view current reports, open specific types of reports, schedule a report to run later, and customize the results of a report.

Choose Reports > Report Launch Pad in the left navigation pane to access the reports and the reporting functionality.

Service Performance dashboard provides a collection of graphical and tabular representation of Performance measurement for the selected circuit/VC over time. This information is available in the form of customized dashlets. The dashboard menu provides access to all the available Cisco EPN Manager dashboards.

From Service Performance Dashboard, you must select a circuit/VC from the Circuits/VCs drop-down list to view the following information (dashlets):

To launch the dashboard for a specific service from its Circuit/VC 360 view, click View and then choose Dashboard.

For more information on managing dashboards and dashlets, see Get Started With Cisco EPN Manager.

Trace and Visualize the Full Route of Circuits/VCs

Use the Multilayer Trace view (MLT) to visualize a circuit in a graphical manner. This view displays the complete circuit span and service trace between two endpoints and can be used to trace the connectivity of a circuit by displaying the source node, the destination node, and any intermediate nodes in graphical format.

To trace and visualize the full route of a circuit:

The Multilayer Trace view displays a graphical map that: 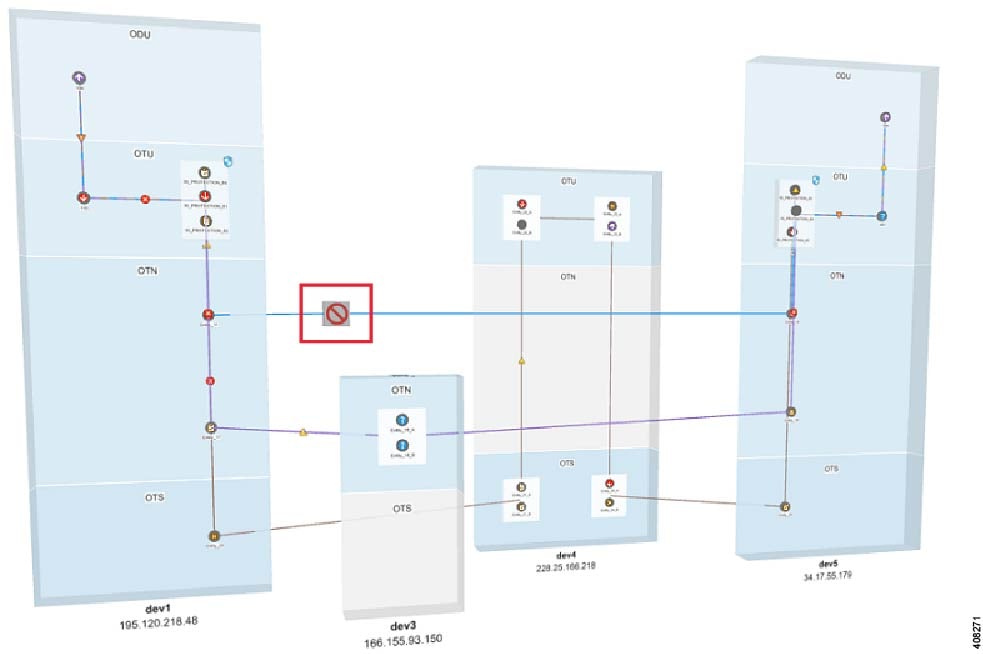 This is the default view. It displays a three-dimensional view of the full route of a circuit/VC. For information about how to access this view, see Trace and Visualize the Full Route of Circuits/VCs.

This view displays the different paths available for the selected circuit. For example, if an optical circuit has working path, protected path, and restoration path, the paths are color-coded and displayed in this view.

To know about the navigation controls in the three-dimensional view, click the help icon in the tool bar. The Navigation Controls data popup window shows the mouse, MAC Trackpad, and keyboard controls to pan, zoom, and rotate in this view. 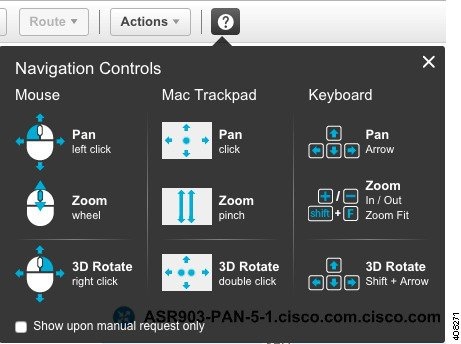 Linear View of a Circuit/VC Trace

Using the linear view, you can trace and visualize the route of a circuit/VC in a two-dimensional view. For information about how to access this view, see Trace and Visualize the Full Route of Circuits/VCs.

This view displays only one path of the circuit at a time. Choose Route, and then select Working, Protected, or Restored to view the required path in the circuit trace. The path options will vary depending on the type of circuit/VC you selected. 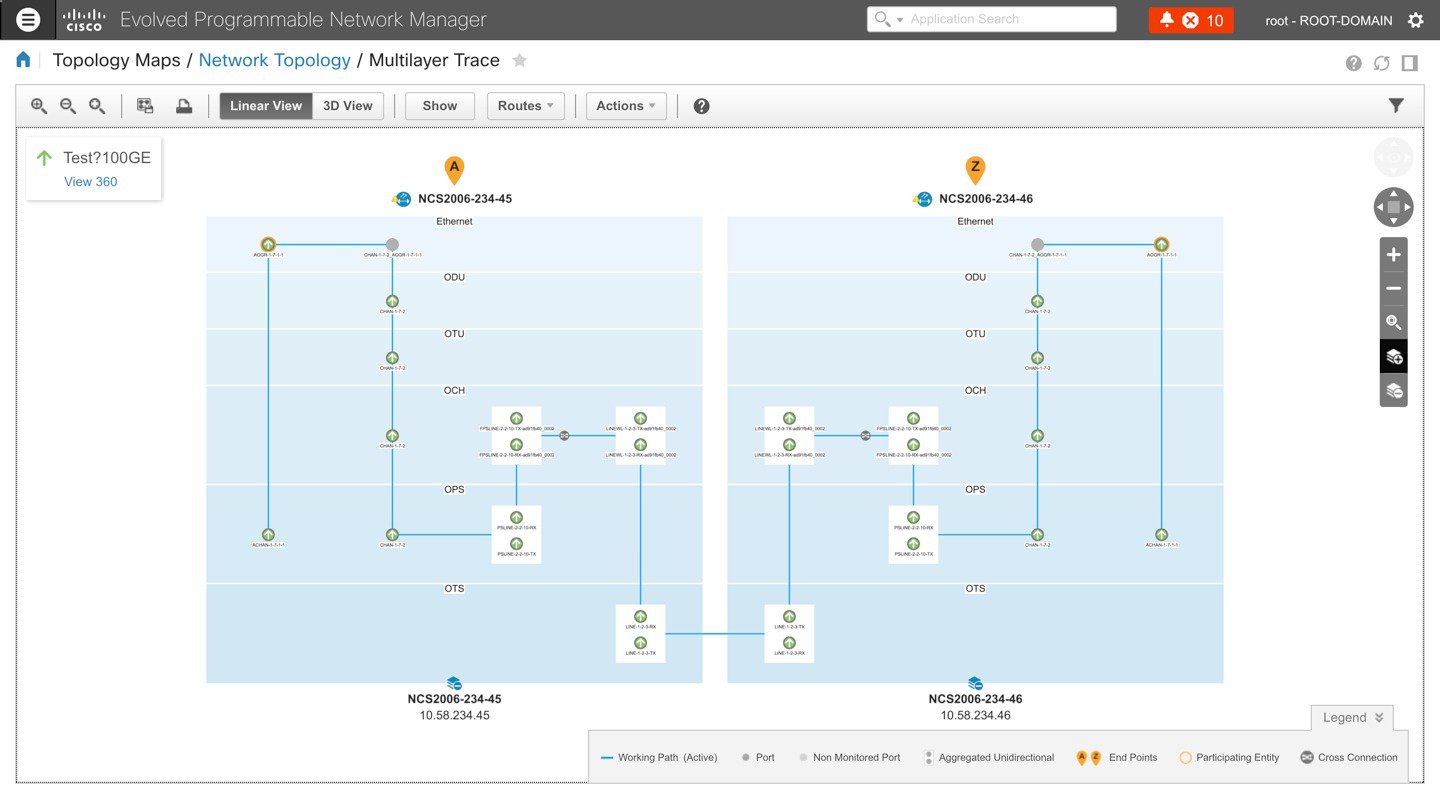 View Specific Information of a Circuit in a Multilayer Trace View

In the multilayer trace view of a circuit, you can choose what information you want to view by enabling the specific check box from the Show menu. You can choose to view the labels, physical flows, links, route directions, SRRG, port states, power levels, span loss, and faults in the circuit. The check boxes vary depending on the type of circuit/VC you selected. 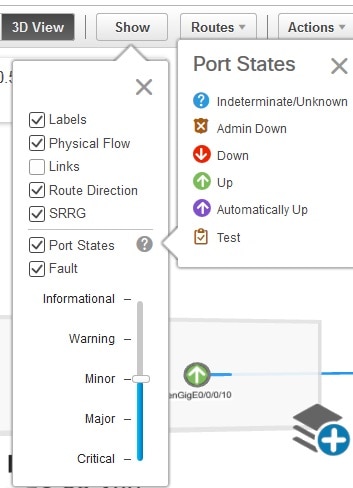 icon. But this icon will be enabled only for those circuits (bidirectional non-symmetrical circuit) that has different A to Z and Z to A paths. For example, a Carrier Ethernet or a CEM circuit traversing over two different unidirectional TE Tunnels. The switch icon does not appear for these circuits:

When you apply filter to the layers, the Route Direction check box gets disabled depending on the chosen layer. Once disabled, it does not get auto-enabled and you have to manually enable the check box to view the route direction animation again.

In case of a partially discovered circuit or a problematic/unsupported circuit configuration, the default route direction from A to Z might not launch. But these circuits may have a potential Z to A direction, which traverses a different path. Click the Change Endpoints hyperlink to configure the endpoints to launch the multilayer trace view in the opposite direction.

Actions You Can Perform from the Multilayer Trace View

You can do the following from the Multilayer Trace view: