GPRS and UMTS are evolutions of the Global System for Mobile Communications (GSM) networks. GSM is a digital cellular technology that is used worldwide, predominantly in Europe and Asia. GSM is the world's leading standard in digital wireless communications.

Serving GPRS Support Node (SGSN)—Connects the Radio Access Network (RAN) to the GPRS/UMTS core and tunnels user sessions to the GGSN. The SGSN sends data to and receives data from mobile stations, and maintains information about the location of a mobile station (MS). The SGSN communicates directly with the MS and the GGSN. SGSN support is available from Cisco partners or other vendors.

Figure 2-1 provides a view of the basic GPRS/UMTS network components. 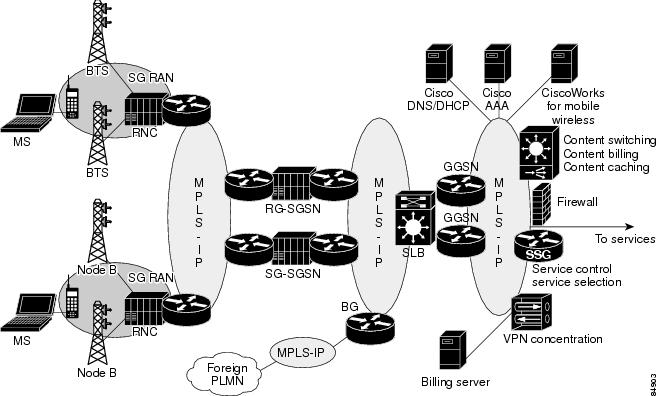 Note that, as illustrated in Figure 2-1, the Radio Access Network (RAN) is made up of different components for 2.5G and 3G.

The RAN then connects to the GPRS/UMTS core through an SGSN, which tunnels user sessions to a GGSN that act as a gateway to the services networks (for example, the Internet and intranet). The connection between the SGSN and the GGSN is enabled through a tunneling protocol called the GPRS Tunneling Protocol (GTP); GTP Version 0 (GTP V0) for 2.5G applications and GTP Version 1 (GTP V1) for 3G applications. GTP is carried over IP. Multiple SGSNs and GGSNs within a network are referred to collectively as GPRS Support Nodes (GSNs).

Depending on the specific operator configuration, the RAN, GPRS/UMTS core, and the services networks can be made up of IP or MPLS networks.

To assign mobile sessions an IP address, the GGSN uses the Dynamic Host Configuration Protocol (DHCP). The GGSN can use a Remote Authentication Dial-In User Service (RADIUS) server to authorize and authenticate the remote users. DHCP and RADIUS services can be specified at the global configuration level (using GPRS DHCP and RADIUS commands), or for each access point configured on the GGSN.

Figure 2-2 shows the interfaces that are implemented in the Cisco IOS GGSN Release 4.0 feature:

Gi interface—Reference point between a GPRS/UMTS network and an external packet data network.

The GPRS/UMTS standards define a network identity called an access point name (APN). An APN identifies the service or network to which a user a user can connect to from a GGSN in a GPRS/UMTS network.

Enables the use of a packet-based air interface over the existing circuit-switched GSM network, which allows greater efficiency in the radio spectrum because the radio bandwidth is used only when packets are sent or received.

Supports minimal upgrades to the existing GSM network infrastructure for those network service providers who want to add GPRS services on top of GSM, which is currently widely deployed.

In addition to the above, the 3G UMTS technology extends these benefits to include:

The Cisco IOS GGSN 4.0 feature is a fully-compliant 2.5G and 3G GGSN that provides the following:

GGSN interworking between 2.5G and 3G SGSNs with RA update from: