Cisco TrustSec (CTS) builds secure networks by establishing domains of trusted network devices. Each device in the domain is authenticated by its peers. Communication on the links between devices in the domain is secured with a combination of encryption, message integrity check, and data-path replay protection mechanisms.

Cisco TrustSec (CTS) Security Group Tag (SGT) Exchange Protocol (SXP) (CTS-SXP) is a control protocol which propagates IP address to Security Group Tag (SGT) binding information across network devices. SGT is maintained by tagging packets on ingress to the CTS-SXP network so that they can be properly identified for the purpose of applying security and other policy criteria along the data path. The Security Group Tag (SGT) allows the network to enforce the access control policy by enabling the endpoint device to act upon the SGT to filter traffic.

Loop prevention is achieved by adding SXP propagation path information when propagating (adding/deleting) bindings. Propagation path information keeps track of the network devices (via their node IDs) that the binding travels in an ordered manner. All nodes that participate in the network with looped SXP connections must run SXPv4 to function correctly. Loop detection is a mandatory capability in SXPv4. 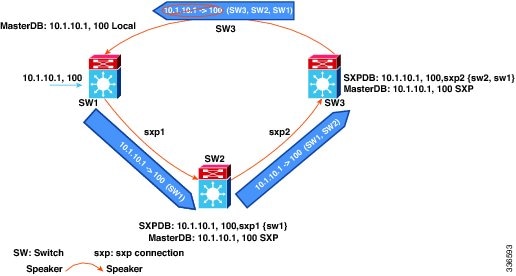 In the figure above there are three network devices: SW1, SW2, and SW3. There are also three SXP connections: SXP1, SXP2 and SXP3, together which create an SXP connection loop. A binding (10.1.10.1, 100) is learned at SW1 through local authentication. The binding is exported by SW1 to SW2 together with the path information (that is, SW1, from where the binding is forwarded).

If the binding is removed from SW1, (for example, if a user logs off), a binding deletion event is sent. The deletion event goes through the same path as above. When it reaches SW1, no action will be taken as no such binding exists in the SW1 binding database.

Loop detection is done when a binding is received by an SXP but before it is added to the binding database.

An SXP node ID is used to identify the individual devices within the network. The node ID is a four-octet integer that can be configured by the user. If it is not configured by the user, SXP picks a node ID itself using the highest IPv4 address in the default VRF domain, in the same manner that EIGRP generates its node ID. The node ID has to be unique in the network that SXP connections traverse to enable SXP loop detection.

The bindings that are associated with the original node ID have to be deleted in all SXP nodes before the new node ID is configured. This can be done by disabling the SXP feature on the network device where you desire to change the node ID.

Before you change the node ID, wait until the SXP bindings that are propagated with the particular node ID in the path attribute are deleted.

Keepalive and Hold-Time Negotiation with SXPv4

SXP connections are asymmetric with almost all of the protocol messages (except for open/open_resp and error messages) being sent from an SXP speaker to an SXP listener. The SXP listener can keep a potentially large volume of state per connection, which includes all the binding information learned on a connection. Therefore, it is only meaningful to have a keepalive mechanism that allows a listener to detect the loss of connection with a speaker.

The mechanism is based on two timers:

The hold-time for the keepalive mechanism may be negotiated during the open/open_resp exchange at connection setup. The following issues are important during the negotiation:

The figure above illustrates the hold-time negotiation process. More detail on the listener’s and speaker’'s roles is given below.

Each security group in a CTS domain is assigned a unique 16 bit tag called the “Security Group Tag” (SGT). The SGT is a single label indicating the privileges of the source within the entire network. It is in turn propagated between network hops allowing any intermediary devices (switches, routers) to enforce polices based on the identity tag.

CTS-capable devices have built-in hardware capabilities than can send and receive packets with SGT embedded in the MAC (L2) layer. This feature is called “L2-SGT Imposition.” It allows Ethernet interfaces on the device to be enabled for L2-SGT imposition so that device can insert an SGT in the packet to be carried to its next hop Ethernet neighbor. SGT-over-Ethernet is a method of hop-by-hop propagation of SGT embedded in clear-text (unencrypted) Ethernet packets. Inline identity propagation is scalable, provides near line-rate performance and avoids control plane overhead.

The Cisco TrustSec with SXPv4 feature supports CTS Meta Data (CMD) based L2-SGT. When a packet enters a CTS enabled interface, the IP-SGT mapping database (with dynamic entries built by SXP and/or static entries built by configuration commands) is analyzed to learn the SGT corresponding to the source IP address of the packet, which is then inserted into the packet and carried throughout the network within the CTS header.

As the tag represents the group of the source, the tag is also referred to as the Source Group Tag (SGT). At the egress edge of the network, the group assigned to the packet’s destination becomes known. At this point, the access control can be applied. With CTS, access control policies are defined between the security groups and are referred to as Security Group Access Control Lists (SGACL). From the view of any given packet, it is simply being sourced from a security group and destined for another security group.

On a Cisco ASR 1000 series router, the SGT tag received in a packet from a trusted interface will be propagated to the network on the other side and will also be used for Identity Firewall (IDFW) classification. When IPsec support is added, the received SGT tag will be shared with IPSec for SGT tagging.

A network device at the ingress of CTS cloud needs to determine the SGT of the packet entering the CTS cloud so that it can tag the packet with that SGT when it forwards it into the CTS cloud. The SGT of a packet can be determined with these methods:

The following are the considerations for SGT inline tagging for IPv6 traffic:

Hold-time can be configured globally on a network device, which applies to all SXP connections configured on the device.

The peer connection must be configured on both devices. One device is the speaker and the other is the listener. When using password protection, make sure to use the same password on both ends.

Display the SXP connections on a device

In SXPv4, an SXP node ID is shown:

This example shows how to enable an interface on the device for L2-SGT tagging or imposition and defines whether the interface is trusted for CTS: