How Cisco TrustSec and ACI Works?

Cisco TrustSec is a system that provides security for Cisco TrustSec-enabled network devices at each routing hop. In this system, each network device works to authenticate and authorize its neighbor devices, and then apply some level of security (group tagging, role-based access control lists (ACLs), encryption, and so on) to traffic between the devices. The Cisco TrustSec-enabled device acts as a border router. Cisco Identity Service Engine (ISE) is the designated domain manager for the Cisco TrustSec device. Cisco ISE is the primary source of group namespace and role-based policy information for Cisco TrustSec devices. Cisco ISE authenticates and authorizes end points into Security Groups (SGs).

Earlier to release Cisco IOS XE Everest 16.5.1 and Cisco ISE 2.2, the interaction between TrustSec and ACI was limited to:

Effective with Cisco IOS XE Everest 16.5.1 and Cisco ISE 2.2, the mapping of security group tag with an ACI VNID that is used to represent an EPG is done dynamically. The same is true for traffic sourced from the ACI domain, wherein the VNID is translated into SGT for enforcement in the TrustSec domain. Hence, the TrustSec and ACI integration feature leverages the initial group information exchange to provide a data plane integration, where traffic source from either domain is dynamically translated into the destination domain's policy group structure - that is, source security group tag (SGT) is translated to ACI EPG and vice versa. This exchange allowed these new Security Groups or Endpoint Groups to be used in policies within the respective domains.

Cisco ISE interfaces with ACI Controller, which is also called APIC-DC, to learn EPG names, share SG names and corresponding EPG value, SGT value and VRF Name. This allows Cisco ISE to create and populate SG-EPG translation tables, which are obtained by the border device to translate TrustSec-ACI identifiers as traffic passes across the domains.

The ACI TrustSec Integration feature enables interaction between Cisco TrustSec and ACI in the following ways:

A high-level workflow of the interaction is as follows:

In addition to the above workflow, the following steps may be required:

This section explains the interactions between the Cisco TrustSec device and ISE in different scenarios.

The following table explains the interactions between the Cisco TrustSec device and ISE on the control plane, based on the configuration status of the cts sg-epg translation command, when ISE is connected to an Application Policy Infrastructure Controller (APIC) device.

The following table explains the interactions between the Cisco TrustSec device and ISE on the control plane, based on configuration status of the cts sg-epg translation command, when ISE is not connected to an APIC device.

The PAC is a unique shared credential used to mutually authenticate client and server. It is associated with a specific client username and a server authority identifier (A-ID). A PAC removes the need for Public Key Infrastructure (PKI) and digital certificates.

Creating a PAC consists of the following steps:

The figure below describes the PAC's construction. A PAC consists of the PAC-Opaque, PAC Key, and PAC-Info fields. The PAC-Info field contains the A-ID. 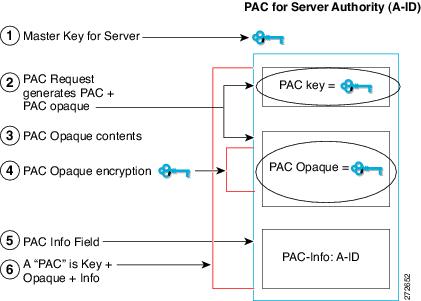 In Secure RADIUS, the PAC key is provisioned into each device during authentication to derive the shared secret. Since the RADIUS ACS does not store the PAC key for each device, the clients must also send an additional RADIUS attribute containing the PAC-Opaque field, which is a variable length field that can only be interpreted by the server to recover the required information and validate the peer’s identity and authentication. For example, the PAC-Opaque field may include the PAC key and the PAC’s peer identity.

EAP-FAST Phase 0 is used to automatically provision a client with a PAC.

Perform the following steps when deploying devices in an HA setup:

How to Configure Cisco TrustSec and ACI Integration

Once the above configuration is done, the TrustSec ACI interaction can be verified using a list of show commands.

Interconnection between Identity Service Engine (ISE) and ACI is required to exchange SG and EPG mappings and policy elements. To enable this interconnection, the TrustSec-ACI Policy Element Exchange option must be enabled in the Settings tab (Work Centers >> TrustSec >> Settings) in ISE. If this option is not enabled, communication between ISE and ACI will not be possible.

Configuring the Data Plane or Data-Path

For the control plane to connect to the data-path and send the SG-EPG mapping table, configure the data-path. The command group-based policy is used to perform this configuration.

Use the show cts sg-epg translations command to list the entries in the control plane.

The command lists the mappings with key fields:

The explanation for the Status column is as follows:

Use the show platform hardware qfp active feature cts datapath commands to show the entries in the data-path.

Translation tables are refreshed along the following scenarios: