IEEE 802.1X port-based authentication is configured on a device to prevent unauthorized devices (supplicants) from gaining access to the network. The device can combine the function of a router, switch, and access point, depending on the fixed configuration or installed modules. The switch functions are provided by either built-in switch ports or a plug-in module with switch ports. This feature supports both access ports and trunk ports.

The following tasks must be completed before implementing the IEEE 802.1X Port-Based Authentication feature:

To determine whether your router has switch ports that can be configured with the IEEE 802.1X Port-Based Authentication feature, use the show interfaces switchport command.

Upgrading from a Previous Software Release

With IEEE 802.1X authentication, the devices in the network have specific roles as shown in the figure below. 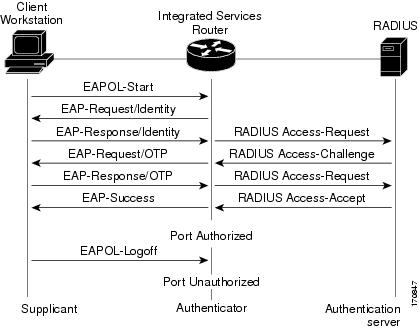 The AAA process begins with authentication. When IEEE 802.1X port-based authentication is enabled and the device attempting to authenticate is IEEE 802.1x-capable (meaning it supports the supplicant functionality), this event occurs:

The router reauthenticates a supplicant when this situation occurs:

You can configure the reauthentication timer to use a router-specific value or to be based on values from the RADIUS server.

The Session-Timeout RADIUS attribute (Attribute [27]) specifies the time after which reauthentication occurs.

You can configure an IEEE 802.1X port for single-host or for multihost mode. In single-host mode (see the figure IEEE 802.1X Device Roles in the Device Roles section of this module), only one supplicant can be authenticated by the IEEE 802.1X-enabled switch port. The router detects the supplicant by sending an EAPOL frame when the port link state changes to the up state. If a supplicant leaves or is replaced with another supplicant, the router changes the port link state to down, and the port returns to the unauthorized state.

If a client that does not support IEEE 802.1X authentication connects to an unauthorized IEEE 802.1X port, then the router requests the client’s identity. In this situation, if the client does not respond to the request, the port remains in the unauthorized state, and the client is not granted access to the network.

When a supplicant logs off, it sends an EAPOL-logoff message, causing the router port to change to the unauthorized state.

If the link state of a port changes from up to down, or if an EAPOL-logoff frame is received, the port returns to the unauthorized state.

Use the IEEE 802.1X—Conditional Logging feature for troubleshooting. When the Conditional Logging feature is enabled, the router generates debugging messages for packets entering or leaving the router on a specified interface; the router will not generate debugging output for packets entering or leaving through a different interface. You can specify the interfaces explicitly. For example, you may want to see only debugging messages for one interface or subinterface. You can also turn on debugging for all interfaces that meet the configured condition. This feature is useful on dial access servers, which have a large number of ports.

The IEEE8021-PAE-MIB supports reporting of the following information:

The Cisco-PAE-MIB provides SNMP support for the logging and reporting of events, including:

Example: Enabling IEEE 802.1X and AAA on a Port

The following example shows how to enable IEEE 802.1X and AAA on Fast Ethernet port 2/1 and how to verify the configuration:

The following example shows how to enable 802.1X authentication and to allow multiple hosts: