The Cisco Umbrella Integration feature enables cloud-based security service by inspecting the Domain Name System (DNS) query that is sent to the DNS server through the device. The security administrator configures policies on the Cisco Umbrella portal to either allow or deny traffic towards the fully qualified domain name (FQDN). Cisco device acts as a DNS forwarder on the network edge, transparently intercepts DNS traffic, and forwards the DNS queries to the Cisco Umbrella portal. This feature is available on Cisco IOS XE Denali 16.3 and later releases.

Before you configure the Cisco Umbrella Integration feature, ensure that the following are met:

The Umbrella Integration cloud, based on the policies configured on the portal and the reputation of the DNS Fully Qualified Domain Name (FQDN) may take one of the following actions: 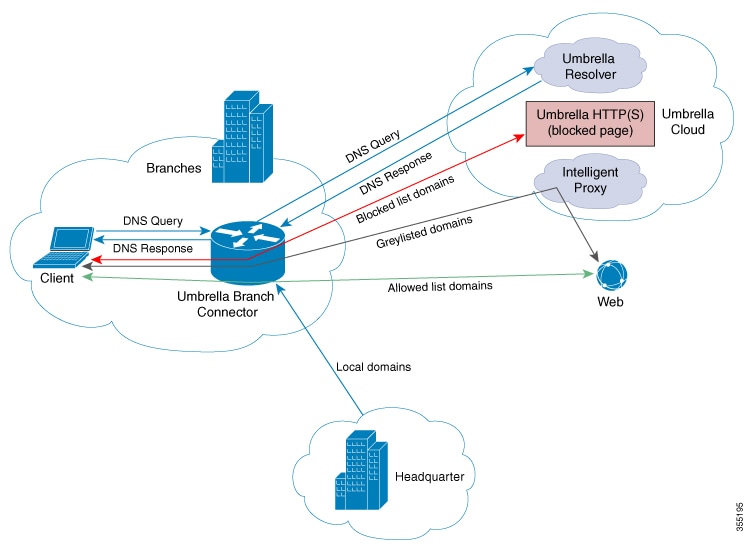 When the DNS response is received, the device forwards the response back to the host. The host will extract the IP address from the response and send the HTTP / HTTPS requests to this IP. 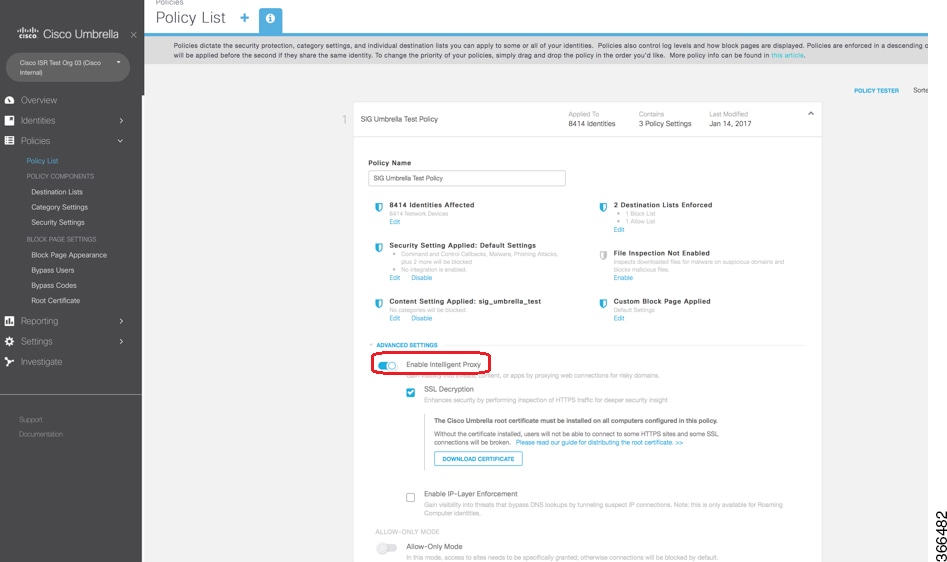 With Cisco Umbrella Integration, HTTP and HTTPs client requests are handled in the following ways:

The DNS packet sent from the Cisco device to Cisco Umbrella Integration server must be encrypted if the EDNS information in the packet contains information such as user IDs, internal network IP addresses, and so on. When the DNS response is sent back from the DNS server, device decrypts the packet and forwards it to the host.

You can encrypt DNS packets only when the DNScrypt feature is enabled on the Cisco device.

Cisco Umbrella Integration provides security and policy enforcement at DNS level. It enables the administrator to split the DNS traffic and directly send some of the desired DNS traffic to a specific DNS server (DNS server located within the enterprise network). This helps the administrator to bypass the Cisco Umbrella Integration.

This is the sample configuration:

To register the Cisco Umbrella tag, perform these steps:

When you configure the device using the parameter-map type umbrella global command, the following values are auto-populated:

We recommend that you change the above parameters only when you perform certain tests in the lab. These parameters are reserved for future use. If you modify these parameters, it can affect the normal functioning of the device.

The following commands change the redirection of DNS packets from the Cisco device to Cisco Umbrella cloud:

With the default values of 208.67.222.222 and 208.67.220.220, all DNS packets are redirected to Cisco Umbrella Anycast resolvers. The device uses the first default resolver IP address for all its redirection. When the Cisco device does not receive a response for three consecutive DNS queries, the device automatically switches to a different resolver IP address. This behavior remains the same for IPv6 resolver addresses.

Public-key is used to download the DNSCrypt certificate from Cisco Umbrella Integration cloud. This value is preconfigured to B735:1140:206F:225D:3E2B:D822:D7FD:691E:A1C3:3CC8:D666:8D0C:BE04:BFAB:CA43:FB79 which is the public-key of Cisco Umbrella Integration Anycast servers. If there is a change in the public-key and if you modify this command, then you have to remove the modified command to restore the default value. If you modify the value, the DNSCrypt certificate download may fail.

DNSCrypt is an encryption protocol to authenticate communications between the Cisco device and the Cisco Umbrella Integration. When the parameter-map type umbrella is configured and umbrella out is enabled on WAN interface, DNSCrypt gets triggered and a certificate is downloaded, validated, and parsed. A shared secret key is then negotiated, which is used to encrypt the DNS queries. For every hour this certificate is automatically downloaded and verified for an upgrade, a new shared secret key is negotiated to encrypt the DNS queries.

When the DNSCrypt is used, the DNS request packets size is more than 512 bytes. Ensure that these packets are allowed through the intermediary devices; otherwise, the response may not reach the intended recipients.

The show platform software umbrella f0 config command shows whether the Umbrella global configurations performed at the control plane are propagated to the FP layer.

The show platform software umbrella f0 interface-info command shows whether the Umbrella interface configurations performed at the control plane are propagated to the FP layer.

Depending on the OS, run either of these two commands from the client device:

This example shows how to enable Cisco Umbrella Integration:

To use the Cisco Prime CLI templates to provision the Cisco Umbrella Integration deployment, perform these steps:

The Direct Cloud Access feature allows you to address any security concerns as the local break-out DNS traffic is first sent to Umbrella Cloud for inspection to block any malicious cloud application. You can gain more security with DCA when you connect to your cloud services through secure and private connections. Business processes run faster through direct network access to the major cloud providers. A traffic classification mechanism is required in order to achieve direct internet access for selected cloud applications. DNS method is used to classify the Cloud SaaS applications.

The following figure explains the functionality of DCA for Office 365 Cloud Application:

Network-Based Application Recognition (NBAR) is a classification engine that recognizes and classifies a wide variety of protocols and applications. NBAR uses several classification information metadata such as application name, ID, traffic class, business relevance, and so on.

For Direct Cloud Access feature, when NBAR recognizes the DNS traffic as belonging to cloud application, it attaches the traffic information to DNS packet so that the Umbrella Connector feature can extract and use the information.

The Umbrella Connector is a component on the Cisco device that intercepts DNS traffic and redirects it to Umbrella cloud for security inspection and policy application.

Performance Routing (PfR) component delivers intelligent path control for application-aware routing across the WAN. Once a DNS response is received, the data traffic (HTTP, HTTPS etc.) originating from the cloud application is provided direct internet access (local break-out) or is hauled back to the headquarter for further security inspection by the PfR component.

This section describes the limitations and restrictions for this feature:

To define a match-all class map use the following command:

The following is an example of defining a class map:

To define an Umbrella policy-map use the following command:

The following is an example of defining a umbrella policy map:

To configure Umbrella Connector on an interface, use the following commands:

The following is an example of interface command for Umbrella Connector with no Direct Cloud Access:

The following is an example of interface command for Umbrella Connector with Direct Cloud Access but no policy enforcement at cloud:

The following is an example of interface command for Umbrella Connector with Direct Cloud Access with policy enforcement at cloud:

The unique hardware and software architecture of the router is designed to maximize router uptime during any network event, and thereby provide maximum uptime and resilience within any network scenario. The Cisco Umbrella Integration is enhanced to meet High Availability criteria on Cisco ASR 1000 Series platform. The Cisco ASR Series Router supports the following High Availability options:

In the dual IOSD scenario, the umbrella related configuration syncup happens automatically. However, the device registration and the DNSCrypt keys generation happens only on active IOSD processors. The configuration objects take the path from active device iosd->fman-rp->fman-fp->cpp. The standby IOSD is connected to backup fman-rp which is not connected to fman-fp. The objects from the standby iosd/fman-rp are in the standy fman-rp database.

Any DNS response based on the old processor has the old key index so that it can be decrypted after the failover. Any DNS requests after the failover should start using the new keys seamlessly without any disruption. When the active router becomes unavailable for a reason, the standby router takes over the processing.

In the multiple Route Processor (RP) and Forwarding Plane (FP) scenario, multiple RPs or FPs are available. The active RP is the one connecting to all the FPs and the standby-RP is idle. Only one RP and one FP are active at any time.

In the case of a FP-failover to a redundant FP, there is no disruption as the same objects based on the active RP are programmed on all the FPs and the redundant FP takes over seamlessly.

In the case of a RP failover, the active RP pushes all umbrella config objects along with new deviceid and dnscrypt key objects to active FP similar to dual IOSD processing.

The Interchassis High Availability feature is also known as the box-to-box redundancy feature. Interchassis High Availability enables the configuration of pairs of routers to act as backup for each other. This feature can be configured to determine the active router based on several failover conditions. When a failover occurs, the standby router seamlessly takes over and starts processing call signaling and performing media forwarding tasks.

Redundant devices are joined by a configurable control link and a data synchronization link. The control link is used to communicate the status of devices. The data synchronization link is used to transfer stateful information from Network Address Translation (NAT) and the firewall and synchronize the stateful database. The pairs of redundant interfaces are configured with the same uniqueID number known as the redundant interface identifier (RII).

In the case of umbrella, the two devices independently register with the portal and get two unique device-IDs, generates two different DNSCrypt keys and pushes them to the CPP. Each of the device is operating independently as a stand alone device with the only modification to take care of asymmetric routing. When there is a failure in one of the chassis, the other chassis takes over. Note that since there is no syncup between devices, any messages received from the failed device cannot be decrypted on the active device. However, these messages can be encrypted with the keys of the new active chassis.