This feature assumes that EIGRP is already configured in your network and that basic PfR functionality is also configured.

The PfR EIGRP mGRE DMVPN Hub-and-Spoke Support feature introduces PfR route control for EIGRP. When enabled, a parent route check is performed in the EIGRP database for controlling PfR prefixes and routes in addition to the existing BGP and static route databases.

PfR can only optimize paths for prefixes, which have an exact matching route or a less specific route (also called as parent route) in the routing protocols. The route being controlled by PfR can be an exact match of the parent route or can be a more specific one. For example, if PfR wants to control 10.1.1.0/24 but the EIGRP routing table has only 10.1.0.0/16 then the parent route is 10.1.0.0/16 and PfR will inject 10.1.1.0/24 in the EIGRP routing table.

PfR monitors traffic performance for prefixes it is controlling either passively using NetFlow or actively using IP SLA probes. Performance statistics such as delay, loss, and reachability are gathered and compared against a set of policies configured for the prefixes. If the traffic performance does not conform to the policies, the prefix is said to be out-of-policy (OOP). PfR tries to find an alternate path when the prefix goes into the OOP state.

When an exit is selected, a control prefix command is sent to the border router with the selected exit, specifying EIGRP as the protocol to install or modify the route. When the border router receives the command, it checks the EIGRP table to find a parent route. If a parent route is found, PfR will install or modify the route in the EIGRP table and will notify the master controller about the route control status.

If an EIGRP route is successfully installed and advertised into the domain, PfR continues to monitor traffic performance for this prefix and takes further action as mentioned above if the prefix goes OOP.

In DMVPN topologies the mGRE interface works as a one-to-many interface and allows the dynamic creation of tunnels for each connected branch.

The figure below shows a typical dual DMVPN topology. The head office (R2) has one hub (hub1) that connects to the remote site spokes using one of the DMVPN networks (DMVPN 1 or DMVPN 2) or the MPLS-GETVPN network. 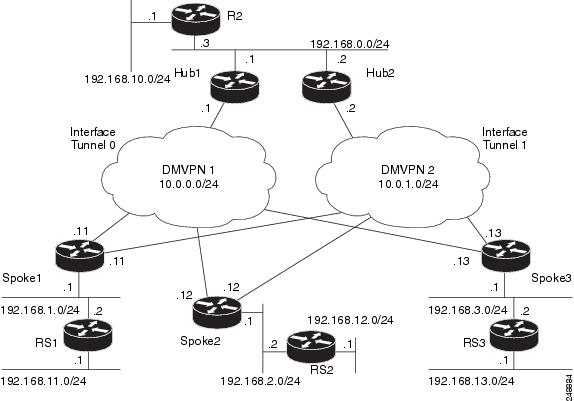 When PfR is configured on the network, the system can perform these functions:

How to Configure PfR to Control EIGRP Routes

This task can also set an extended community value for an injected EIGRP route to allow the routes to be uniquely identified. An EIGRP route may be injected by PfR to control the traffic defined by a traffic class when it goes out-of-policy (OOP). In this task, the PfR route control mode is configured globally with the mode route control command in PfR master controller configuration mode, and any injected EIGRP routes will be tagged with a value of 700.

PfR automatically verifies route control changes in the network using NetFlow output. PfR monitors the NetFlow messages and uncontrols a traffic class if a message does not appear to verify the route control change. Perform the steps in this optional task if you want to manually verify that the traffic control implemented in the PfR control phase actually changes the traffic flow, and brings the OOP event to be in-policy.

All the steps in this task are optional and are not in any order. The information from these steps can verify that a specific prefix associated with a traffic class has been moved to another exit or entrance link interface, or that it is being controlled by PfR. The first two commands are entered at the master controller, the last two commands are entered at a border router.

Only partial command syntax for some of the show commands used in this task is displayed. For more details about PfR show commands, see the Cisco IOS Performance Routing Command Reference.

This task assumes that you have previously enabled EIGRP route control using PfR.

If the show commands are not displaying output that verifies the EIGRP route control, use the debug pfr border routes eigrp command with the optional detail keyword for more information. Debugging must be enabled before entering the required commands, and the debug output depends on which commands are subsequently entered.

This module covers PfR EIGRP route control and presumes that you are familiar with the PfR technology. If you want to review more information about PfR, see the documents that are listed under "Related Documents" section.