This module contains information about and instructions for configuring the MPLS Egress NetFlow Accounting feature. The MPLS Egress NetFlow Accounting feature allows you to capture IP flow information for packets that are undergoing MPLS label disposition; that is, packets that arrive on a router as MPLS packets and that are transmitted as IP packets.

NetFlow is a Cisco IOS application that provides statistics on packets flowing through the router. It is emerging as a primary network accounting and security technology.

The network must support the following Cisco IOS features before you enable the MPLS Egress NetFlow Accounting feature:

Before you can configure the MPLS Egress NetFlow Accounting feature, you must:

Capturing Flows from Sites that Connect to the Same PE Router

The captured egress flows must originate from different sites of the same Virtual Private Network (VPN), and they cannot connect to the same provider edge (PE) router. If both source and destination VPN sites are connected to the PE router, the MPLS egress NetFlow accounting feature does not capture these egress flows. You can capture these flows by enabling ingress NetFlow on the incoming customer edge (CE)-PE link of the PE router. For example, in the figure below, traffic from site 3 (VPN1 destined for site 2) is captured by an ingress NetFlow enabled on the PE2-CE3 link of PE2.

MPLS egress NetFlow accounting might adversely affect network performance because of the additional accounting-related computations that occur in the traffic-forwarding path of the router.

NetFlow data statistics provided by the MPLS Egress NetFlow Accounting feature can account for all packets that are dropped in the core of the service provider network, thus providing more accurate traffic statistics and patterns.

The MPLS Egress NetFlow Accounting feature allows you to capture IP flow information for packets that arrive on a router as MPLS packets and are transmitted as IP packets.

This feature allows you to capture the MPLS Virtual Private Network (VPN) IP flows that are traveling through the service provider backbone from one site of a VPN to another site of the same VPN.

Formerly, you could capture flows only for IP packets on the ingress interface of a router. You could not capture flows for MPLS encapsulated frames, which were switched through CEF from the input port. Therefore, in an MPLS VPN environment, you captured flow information when packets were received from a customer edge (CE) router and forwarded to the backbone. However, you could not capture flow information when packets were transmitted to a CE router because those packets were received as MPLS frames.

The MPLS Egress NetFlow Accounting feature lets you capture the flows on the outgoing interfaces.

The figure below shows a sample MPLS VPN network topology that includes four VPN 1 sites and two VPN 2 sites. If MPLS egress NetFlow is enabled on an outgoing PE interface, you can capture IP flow information for packets that arrive at the PE as MPLS packets (from an MPLS VPN) and that are transmitted as IP packets. For example,

The flows are stored in a global flow cache maintained by the router. You can use the show ip cache flow command or other aggregation flow commands to view the egress flow data. 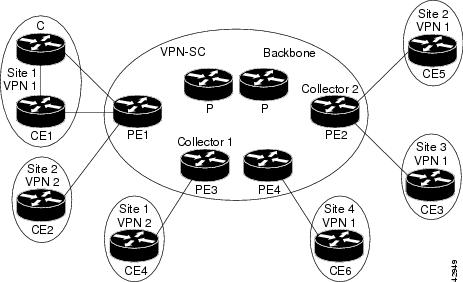 The PE routers export the captured flows to the configured collector devices in the provider network. Applications such as the Network Data Analyzer or the VPN Solution Center (VPN-SC) can gather information from the captured flows and compute and display site-to-site VPN traffic statistics.

Perform the steps in this required task to configure MPLS egress NetFlow accounting.

Perform the steps in this optional task to verify that the MPLS Egress NetFlow Accounting configuration is as you expect.

This section contains a sample configuration for the MPLS Egress NetFlow Accounting feature.

In the following example, MPLS Egress NetFlow Accounting is enabled on interface Ethernet 1/4:

Enter the show running-configcommand to view the current configuration in the router:

This section of the output shows the VRF being defined and shows that the MPLS Egress NetFlow Accounting feature is enabled:

CE router --A customer edge router. A router that is part of a customer network and interfaces to a provider edge (PE) router.

egress PE --The provider edge router through which traffic moves from the backbone to the destination Virtual Private Network (VPN) site.

label --A short, fixed length identifier that tells switching nodes how the data (packets or cells) should be forwarded.

PE route r--A provider edge router. A router at the edge of a provider network that interfaces to customer edge (CE) routers.

VRF --Virtual Private Network (VPN) routing/forwarding instance. The VRF is a key element in the MPLS VPN technology. VRFs exist on PEs only. A VRF is populated with VPN routes and allows one PE to have multiple routing tables. One VRF is required per VPN on each PE in the VPN.