If you are exporting data to a Cisco NetFlow collector, the following requirements apply:

The following restrictions apply to the MPLS-aware NetFlow feature:

An MPLS flow contains up to three of the same incoming MPLS labels of interest with experimental bits and end-of-stack bits in the same positions in the packet label stack. MPLS-aware NetFlow captures MPLS traffic that contains both IP and non-IP packets. It reports non-IP packets, but sets the IP NetFlow fields to 0. It can also be configured to capture and report IP packets, setting to 0 the IP NetFlow fields. MPLS-aware NetFlow uses the NetFlow Version 9 export format. MPLS-aware NetFlow exports up to three labels of interest from the incoming label stack, the IP address associated with the top label, and traditional NetFlow data.

MPLS-aware NetFlow statistics can be used for detailed MPLS traffic studies and analysis that can provide information for a variety of purposes such as MPLS network management, network planning, and enterprise accounting.

A network administrator can turn on MPLS-aware NetFlow inside an MPLS cloud on a subset of provider backbone (P) routers. These routers can export MPLS-aware NetFlow data to an external NetFlow collection device for further processing and analysis or you can display NetFlow cache data on a router terminal.

In the example of an MPLS label stack in the figure above:

This label was the last label added to the MPLS label stack and the label that MPLS-aware NetFlow captures if you indicate the label of interest as 1.

MPLS-aware NetFlow captures this label if you indicate 2 (second from the top) as a label of interest.

MPLS-aware NetFlow captures this label if you indicate 3 (third from the top) as a label of interest.

MPLS-aware NetFlow captures these labels if you indicate 4, 5, or 6 as labels of interest.

The figure below shows a sample Carrier Supporting Carrier (CSC) topology and the incoming MPLS label stack on multiple LSRs as the packet travels through the network. The figure shows what the stack might look like at a provider core LSR. 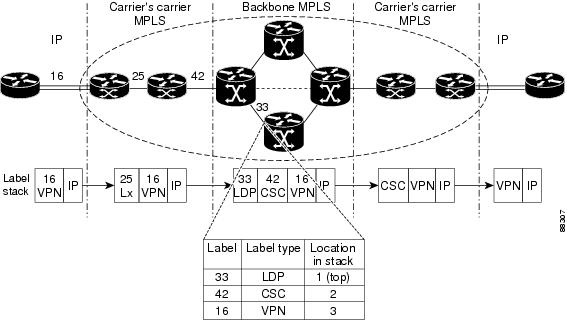 In the example in the figure above, a hierarchical VPN is set up between two customer edge (CE) routers.

At the inbound interface shown in the figure above, MPLS-aware NetFlow captures the MPLS label stack and reports that the top label (33) is an LDP label, the second label (42) is a CSC label, and the third label (16) is a VPN label.

With NetFlow and MPLS-aware NetFlow enabled on the P router, you can determine the label type for the specified labels, and the IP address associated with the top label on the incoming interface (see the MPLS-aware NetFlow Capture of MPLS Labels). Thus, you can track specific types of MPLS traffic, such as TE, LDP, or VPNs.

When you configure the MPLS-aware NetFlow feature, you select the MPLS label positions in the incoming label stack that you are interested in monitoring. You can capture up to three labels from positions 1 to 6 in the MPLS label stack. Label positions are counted from the top of the stack. For example, the position of the top label is 1, the position of the next label is 2, and so on. You enter the stack location value as an argument to the following command:

The label-position-n argument represents the position of the label on the incoming label stack. For example, the ip flow-cache mpls label-positions 1 3 4 command configures MPLS-aware NetFlow to capture and export the first (top), third, and fourth labels. If you enter this command and the label stack consists of two MPLS labels, MPLS-aware NetFlow captures only the first (top) label. If some of the labels you requested are not available, they are not captured or reported.

The MPLS-aware NetFlow feature allows the display of a snapshot of the NetFlow cache, including MPLS flows, on a terminal through the use of the show ip cache verbose flow command. For example, the following output from a provider core router (P router) shows position, value, experimental bits, and end-of-stack bit for each MPLS label of interest. It also shows the type of the top label and the IP address associated with the top label.

In this example from a P router:

To fully understand and use the information gathered on the P router, you need information from the Label Forwarding Information Base (LFIB) on the PE router.

Using MPLS-aware NetFlow, you can monitor various labels in the MPLS label stack. You can also export this information to a NetFlow collector for further processing with a data analyzer and look at MPLS traffic patterns in your network.

MPLS-aware NetFlow captures and reports on other information in addition to MPLS labels. It provides per-flow statistics for both incoming IP and MPLS traffic.

In addition to these statistics, MPLS-aware NetFlow exports values for the following fields for each flow, using the Version 9 NetFlow export format:

The table below shows full and sampled MPLS-aware NetFlow support. Information in the table is based on the Cisco IOS release and includes the commands to implement the functionality on a supported platform.

3 NetFlow sampling on the Cisco 7500 and 7200 platforms is performed by a feature called Random Sampled NetFlow.

How to Configure MPLS-aware NetFlow

Configuring MPLS-aware NetFlow on a Router

Perform the following task to configure MPLS-aware NetFlow on a router.

6.    Repeat Steps 3 through 5 for each interface you want to configure NetFlow on.

Perform the following task to configure sampling for MPLS-aware NetFlow.

For more information about NetFlow export sampling, see the Using NetFlow Filtering or Sampling to Select the Network Traffic to Track module.

Perform the following task to verify the NetFlow sampler configuration on your router:

Perform this task to display a snapshot of the MPLS-aware NetFlow cache on a router.

The following examples show MPLS-aware NetFlow configured globally and NetFlow enabled on an interface on a router with a Cisco IOS Release 12.2(14)S, 12.2(15)T, or 12.0(22)S or later releases:

The following examples show how to define a NetFlow sampler that randomly selects 1 out of 100 packets for NetFlow processing, and how to apply this sampler to an interface on a Cisco 7500 or Cisco 7200 series router.

The following example shows how to define a NetFlow sampler called mysampler that randomly selects 1 out of 100 packets for NetFlow processing:

Applying the NetFlow Sampler to an Interface

The following example shows how to apply the NetFlow sampler named mysampler to an interface:

AToM --Any Transport over MPLS. A protocol that provides a common framework for encapsulating and transporting supported Layer 2 traffic types over a Multiprotocol Label Switching (MPLS) network core.

CE router --customer edge router. A router that is part of a customer network and that interfaces to a provider edge (PE) router. CE routers do not have routes to associated VPNs in their routing tables.

EGP --Exterior Gateway Protocol. Internet protocol for exchanging routing information between autonomous systems. It is documented in RFC 904. This term is not to be confused with the general term exterior gateway protocol. EGP is an obsolete protocol that was replaced by Border Gateway Protocol (BGP).

FEC --Forward Equivalency Class. A set of packets that can be handled equivalently for the purpose of forwarding and thus is suitable for binding to a single label. The set of packets destined for an address prefix is one example of an FEC. A flow is another example.

IPv6 --IP Version 6. Replacement for the current version of IP (Version 4). IPv6 includes support for flow ID in the packet header, which can be used to identify flows. Formerly called IPng (next generation).

label --A short, fixed-length identifier that tells switching nodes how the data (packets or cells) should be forwarded.

label imposition --The act of putting a label or labels on a packet.

LFIB --Label Forwarding Information Base. A data structure and way of managing forwarding in which destinations and incoming labels are associated with outgoing interfaces and labels.

LSR --label switch router. A router that forwards packets in a Multiprotocol Label Switching (MPLS) network by looking only at the fixed-length label.

MPLS --Multiprotocol Label Switching. A switching method in which IP traffic is forwarded through use of a label. This label instructs the routers and the switches in the network where to forward the packets. The forwarding of MPLS packets is based on preestablished IP routing information.

packet header -- (NetFlow) The first part of an export packet that provides basic information about the packet, such as the NetFlow version, number of records contained within the packet, and sequence numbering. The header information enables lost packets to be detected.

PE router --provider edge router. A router that is part of a service provider's network connected to a customer edge (CE) router. All VPN processing occurs in the PE router.

TE --traffic engineering. Techniques and processes that cause routed traffic to travel through the network on a path other than the one that would have been chosen if standard routing methods were used.

VPN --Virtual Private Network. A secure IP-based network that shares resources on one or more physical networks. A VPN contains geographically dispersed sites that can communicate securely over a shared backbone.