This module contains information about and instructions for configuring NetFlow to capture and export network traffic data. NetFlow capture and export are performed independently on each internetworking device on which NetFlow is enabled. NetFlow need not be operational on each router in the network.

NetFlow is a Cisco IOS application that provides statistics on packets flowing through the router. NetFlow is a primary network accounting and security technology.

Before you enable NetFlow, you must do the following:

NetFlow consumes a significant amount of memory. If you have memory constraints, you might want to preset the size of the NetFlow cache so that it contains a lower number of entries. The default cache size depends on the platform. For example, the default cache size for the Cisco 7500 router is 65,536 (64K) entries.

If your router is running a version earlier than Cisco IOS Release 12.4(20)T, and your router does not have a VPN Service Adapter (VSA)-enabled interface, enabling the ip flow ingresscommand will result in the ingress traffic being accounted for twice by the router.

If your router is running a version earlier than Cisco IOS Release 12.4(20)T, and your router has a VSA-enabled interface, enabling the ip flow ingress command will result in the encrypted ingress traffic being accounted for only once.

If your router is running a version of Cisco IOS Release12.4(20)T or later, enabling the ip flow ingress command will result in the encrypted ingress traffic being accounted for only once.

Egress NetFlow accounting might adversely affect network performance because of the additional accounting-related computation that occurs in the traffic-forwarding path of the router.

Version 8 export format is available only for aggregation caches; it cannot be expanded to support new features.

Version 5 export format is suitable only for the main cache; it cannot be expanded to support new features.

NetFlow captures data for all egress (outgoing) packets through the use of the following features:

These seven key fields define a unique flow. If a packet has one key field that is different from another packet, it is considered to belong to another flow. A flow might contain other accounting fields (such as the autonomous system number in the NetFlow export Version 5 flow format) that depend on the export record version that you configure. Flows are stored in the NetFlow cache.

NetFlow is efficient, with the amount of export data being about 1.5 percent of the switched traffic in the router. NetFlow accounts for every packet (nonsampled mode) and provides a highly condensed and detailed view of all network traffic that enters the router or switch.

The key to NetFlow-enabled switching scalability and performance is highly intelligent flow cache management, especially for densely populated and busy edge routers handling large numbers of concurrent, short duration flows. The NetFlow cache management software contains a highly sophisticated set of algorithms for efficiently determining whether a packet is part of an existing flow or whether the packet requires a new flow cache entry. The algorithms are also capable of dynamically updating the per-flow accounting measurements that reside in the NetFlow cache, and determining cache aging or flow expiration.

The rules for expiring NetFlow cache entries include the following:

Expired flows are grouped into "NetFlow export" datagrams for export from the NetFlow- enabled device. NetFlow export datagrams can consist of up to 30 flow records for Version 5 or Version 9 flow export. The NetFlow functionality is configured on a per-interface basis. To configure NetFlow export capabilities, you need to specify the IP address and application port number of the Cisco NetFlow or third-party flow collector. The flow collector is a device that provides NetFlow export data filtering and aggregation capabilities. The figure below shows an example of NetFlow data export from the main and aggregation caches to a collector. 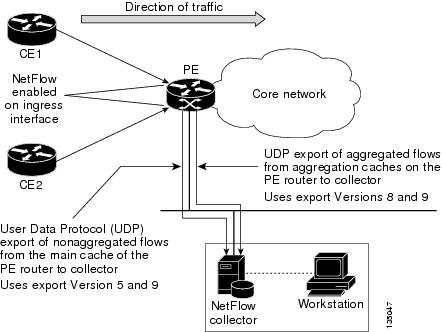 NetFlow exports data in UDP datagrams in one of the following formats: Version 9, Version 8, Version 7, Version 5, or Version 1:

The use of templates with the NetFlow Version 9 export format provides several other key benefits:

The work of the IETF IP, Information Export (IPFIX) Working Group (WG), and the IETF Pack Sampling (PSAMP) WG are based on the NetFlow Version 9 export format.

The figure below shows a typical datagram used for NetFlow fixed format export Versions 1, 5, 7, and 8.

In all the five export versions, the datagram consists of a header and one or more flow records. The first field of the header contains the version number of the export datagram. Typically, a receiving application that accepts any of the format versions allocates a buffer large enough for the largest possible datagram from any of the format versions and then uses the header to determine how to interpret the datagram. The second field in the header contains the number of records in the datagram (indicating the number of expired flows represented by this datagram). Datagram headers for NetFlow Export Versions 5, 8, and 9 also include a "sequence number" field used by NetFlow collectors to check for lost datagrams.

The NetFlow Version 9 export packet header format is shown in the figure below.

1 For a list of other flow fields available in Version 9 export format, see Figure 5 .

The figure below is an example of the NetFlow Version 5 export record format, including the contents and description of byte locations. The terms in bold indicate values that were added for the Version 5 format.

The table below shows the field names and descriptions for the NetFlow Version 5 export record format. 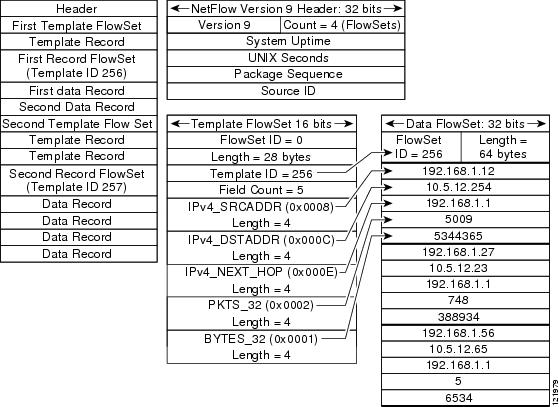 For detailed information on the flow record formats, data types, and export data fields for Versions 1, 7, and 9 and platform-specific information when applicable, see Appendix 2 in the NetFlow Services Solutions Guide .

NetFlow Version 9 is a flexible and extensible means for transferring NetFlow records from a network node to a collector. NetFlow Version 9 has definable record types and is self-describing for easier NetFlow Collection Engine configuration.

Third-party business partners who produce applications that provide NetFlow Collection Engine or display services for NetFlow need not recompile their applications each time a new NetFlow technology is added. Instead, with the NetFlow Version 9 Export Format feature, they can use an external data file that documents the known template formats and field types.

The main feature of NetFlow Version 9 export format is that it is template based. A template describes a NetFlow record format and attributes of fields (such as type and length) within the record. The router assigns each template an ID, which is communicated to the NetFlow Collection Engine along with the template description. The template ID is used for all further communication from the router to the NetFlow Collection Engine.

NetFlow implements a variety of templates, each exporting a different set of fields for a specific purpose. For example, the MPLS templates are different from the Optimized Edge Routing (OER) templates and the various option templates.

The table below lists the export templates and the specific set of fields the export pertains to.

The Version 8 datagram consists of a header with the version number (which is 8) and time-stamp information, followed by one or more records corresponding to individual entries in the NetFlow cache.

The Egress NetFlow Accounting feature can simplify the NetFlow configuration. The following example shows how.

In the two figures below, both incoming and outgoing (ingress and egress) flow statistics are required for the server. The server is attached to Router B. The "cloud" in the figure represents the core of the network and includes MPLS VPNs.

Because only ingress flows could be tracked before the Egress NetFlow Accounting feature was introduced, the following NetFlow configurations had to be implemented for the tracking of ingress and egress flows from Router B:

A configuration such as the one used in the figure above requires that NetFlow statistics from three separate routers be added to obtain the flow statistics for the server.

In the figure below, the following NetFlow configurations are applied to Router B:

The configuration of NetFlow on selected subinterfaces provides the following benefits:

The NetFlow Multiple Export Destinations feature improves the chances of receiving complete NetFlow data because it provides redundant streams of data. Because the same export data is sent to more than one NetFlow collector, fewer packets are lost.

NetFlow on a Distributed VIP Interface

How to Configure NetFlow and NetFlow Data Export

Perform the following task to enable NetFlow on an interface.

6.    Repeat Steps 3 through 5 to enable NetFlow on other interfaces.

Verifying that NetFlow Is Operational and Displaying NetFlow Statistics

Perform the following task to verify that NetFlow is operational and to display NetFlow statistics.

4.    Repeat Step 3 once to configure an additional NetFlow export destination.

Clearing NetFlow Statistics on the Router

Perform the steps in this optional task to clear NetFlow statistics on the router.

To customize the parameters for the main NetFlow cache, perform the steps in this optional task.

The routing device checks the NetFlow cache once per second and causes the flow to expire in the following instances:

After you enable NetFlow on an interface, NetFlow reserves memory to accommodate a number of entries in the NetFlow cache. Normally, the size of the NetFlow cache meets the needs of your NetFlow traffic rates. The cache default size is 64K flow cache entries. Each cache entry requires 64 bytes of storage. About 4 MB of DRAM are required for a cache with the default number of entries. You can increase or decrease the number of entries maintained in the cache, if required. For environments with a large amount of flow traffic (such as an Internet core router), Cisco recommends a larger value such as 131072 (128K). To obtain information on your flow traffic, use the show ip cache flow command.

A NetFlow cache can be resized depending on the platform and the amount of DRAM on a line card. For example, the NetFlow cache size is configurable for software-based platforms such as Cisco 75xx and 72xx series routers. The amount of memory on a Cisco 12000 line card determines how many flows are possible in the cache.

6.    Repeat Steps 3 through 5 for every interface that has NetFlow enabled on it.

13.    Repeat Steps 10 through 12 for every interface that previously had NetFlow enabled on it.

NetFlow SubInterface Support for Egress (Transmitted) Traffic on a Subinterface

The following example shows how to configure the NetFlow data export using the Version 5 export format with the peer autonomous system information:

The following example shows how to configure the NetFlow data export using the Version 5 export format with the peer autonomous system information:

Autonomous system--A collection of networks under a common administration sharing a common routing strategy. Autonomous systems are subdivided by areas. An autonomous system must be assigned a unique 16-bit number by the Internet Assigned Numbers Authority (IANA).

BGP next hop --IP address of the next hop to be used by a router to reach a certain destination.

fast switching --A Cisco feature in which a route cache is used to expedite packet switching through a router.

NetFlow --A Cisco IOS application that provides statistics on packets flowing through the router. It is a primary network accounting and security technology.

RP --Route Processor. A processor module in the Cisco 7000 series routers that contains the CPU, system software, and most of the memory components that are used in the router. It is sometimes called a Supervisory Processor.

1 For a list of other flow fields available in Version 9 export format, see Figure 5 .
2 This is a minor enhancement. Minor enhancements are not typically listed in Feature Navigator.
© 2011 Cisco Systems, Inc. All rights reserved.