Mobile IP has increasingly become important because the public safety and public transportation are likely to adopt multiple wireless technologies to support their mission-critical applications and new services. Before the introduction of the Mobile IP--Mobile Router Multipath Support feature, the Cisco implementation of Mobile IP supported only one tunnel between the mobile router (MR) and the home agent (HA). You must use only one tunnel and one wireless technology at a given time. This feature provides support for multiple paths, and thus multiple wireless technologies, between the mobile router and the home agent and allows user traffic to be load-balanced over all available interfaces.

The Mobile Router Multipath Support feature extends the MR functionality to multiple interfaces. Before the introduction of this feature, the MR received agent advertisements or a collocated care-of address (CCoA) on multiple roaming interfaces. However, it would register through only one interface and set up the tunnel and routes based on that registration. During the routing or tunneling phase, packets arrived at the HA. The HA performed two encapsulations of the packets and tunneled them to the foreign agent or CCoA. The foreign agent or CCoA performed one de-encapsulation and sent the packets to the MR, which performed another de-encapsulation. The MR then sent the original packets to the IP devices on the mobile networks. See the figure below for an illustration of routing within a mobile network using a single tunnel.

Figure 1. Routing Within the Mobile Network Using a Single Tunnel 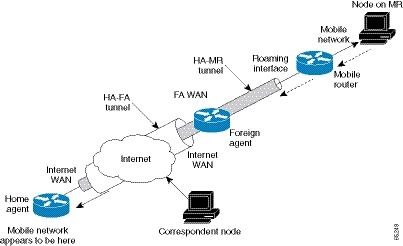 See the figure below for an illustration of the mobile router registering through multiple interfaces.

Upon successful registration, the HA maintains multiple care-of addresses, mobility bindings, tunnels, and routes to the same MR. Multiple bindings are not the same as simultaneous bindings. With multiple bindings, the traffic is not replicated on all tunnels but rather load-balanced across them, which means that the packets are sent through only one path.

When there are multiple paths between the MR and the HA, the traffic from the mobile networks that goes toward the HA is generally load-balanced. Per-destination load balancing is the default behavior. But you can also make use of an advanced behavior, policy-based application routing. Policy-based application routing allows you to identify a particular type of traffic from the mobile networks and then select the tunnel for routing this traffic.

A label is used to describe a link-type associated with a roaming interface. The label indicates the path such as, link type, actual bandwidth, or stability. You need to manually configure the label on a roaming interface using the ip mobile router-service link-typecommand.

Because multiple access technologies can be deployed in mobile networks, the Mobile Router Multipath support feature offers the ability to leverage all available links when Mobile IP is used. This multiple path support offers good investment protection for existing legacy wireless connections or any newly purchased or deployed wireless technologies.

After configuring the MR, you can configure the policy-based application routing and the MR roaming interfaces. You then need to enable the roaming interfaces and define the traffic policies. This allows you to identify a particular type of traffic from the mobile networks and then select the tunnel for routing the traffic. This provides flexibility to control how the applications are routed over different mobile wireless networks based on a policy.

This section contains the following tasks:

This task shows how to configure the mobile router for multipath support.

The security association between the MR and the HA should be established in order for registrations to succeed.

Routing Based on Policies and Selecting Roaming Interfaces

Policy-based application routing occurs only when an ingress interface is configured for a mobile policy.

You can define the traffic policies by identifying the application traffic and selecting the path for routing based on policies. This section contains the following tasks:

You can use one or more extended named ACLs on both the MR and the HA to identify the application traffic. MR and HA named ACLs are used as templates at registration time to generate dynamic ACLs that are used in the dynamic route maps.

You can use one or more mobile-map mobile policy templates on the MR and HA to select the routing path.

When traffic from a mobile network is received by the MR, the traffic is compared against one of the ACLs. If there is a match, the MR finds the corresponding mobile-map entry that specifies the roaming interface on which to send the traffic. Similarly, on the HA when traffic for a mobile network is received on one of the specified ingress interfaces, it is matched against one of the ACLs and then against the corresponding mobile-map entry, which in turn decides the tunnel to send the traffic to.

This task shows how to configure the HA for multipath support.

You can configure and unconfigure multipath support globally on the HA. Unconfiguring multiple paths takes the mobile router back to the existing single-path mode.

Clearing the Mobility Binding on the Home Agent

Perform this task to manually clear the mobility binding that is associated with the MR IP address and its care-of address.

The following example shows how to configure multipath support on the mobile router:

The following example shows how to configure multipath support on the home agent:

Registering the MR Based on the Roaming Priority Example

The following example shows how roaming priority levels are selected during MR registration:

The following example shows to use the mobile-map mobile policy templates on the MR and the HA to select the routing path.

The following example shows how the dynamic route maps are generated in an HA:

The following commands are introduced or modified in the feature or features documented in this module. For information about these commands, see the Cisco IOS IP Mobility Command Reference at http://www.cisco.com/en/US/docs/ios/ipmobility/command/reference/imo_book.html. For information about all Cisco IOS commands, use the Command Lookup Tool at http:/​/​tools.cisco.com/​Support/​CLILookup or to the Cisco IOS Master Commands List, All Releases , at http:/​/​www.cisco.com/​en/​US/​docs/​ios/​mcl/​allreleasemcl/​all_​book.html .

agent advertisement --An advertisement message constructed by an attachment of a special extension to an ICMP Router Discovery Protocol (IRDP).

mobile router --A mobile node that is a router. It provides for the mobility of one or more entire networks moving together, perhaps on an airplane, a ship, a train, an automobile, a bicycle, or a kayak. The nodes connected to a network served by the mobile router may themselves be fixed nodes or mobile nodes or routers.

mobility binding --The association of a home address with a care-of address and the remaining lifetime.

roaming interface --An interface used by the mobile router to detect foreign agents and home agents while roaming. Registration and traffic occur on the interface.