To understand how switching works, it helps to first understand the basic router architecture and where various processes occur in the router.

Fast switching is enabled by default on all interfaces that support fast switching. If you have a situation where you need to disable fast switching and fall back to the process-switching path, understanding how various processes affect the router and where they occur will help you determine your alternatives. This understanding is especially helpful when you are troubleshooting traffic problems or need to process packets that require special handling. Some diagnostic or control resources are not compatible with fast switching or come at the expense of processing and switching efficiency. Understanding the effects of those resources can help you minimize their effect on network performance.

The routing, or forwarding, function comprises two interrelated processes to move information in the network:

Cisco IOS platforms perform both routing and switching, and there are several types of each:

The routing process assesses the source and destination of traffic based on knowledge of network conditions. Routing functions identify the best path to use for moving the traffic to the destination out one or more of the router interfaces. The routing decision is based on various criteria such as link speed, topological distance, and protocol. Each protocol maintains its own routing information.

Routing is more processing intensive and has higher latency than switching as it determines path and next hop considerations. The first packet routed requires a lookup in the routing table to determine the route. The route cache is populated after the first packet is routed by the route-table lookup. Subsequent traffic for the same destination is switched using the routing information stored in the route cache.

The figure below illustrates the basic routing process. 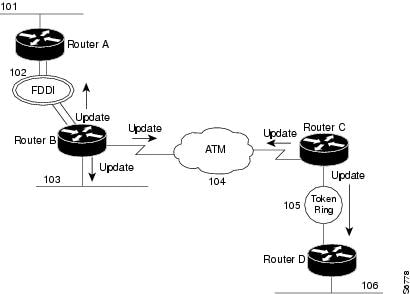 A router sends routing updates out each of its interfaces that are configured for a particular protocol. It also receives routing updates from other attached routers. From these received updates and its knowledge of attached networks, it builds a map of the network topology.

When in severe overload conditions, routers that cannot keep up with the incoming packet stream must drop packets. If no intelligence is applied to choosing which packets to discard, the stability of routing protocols is impacted. The Selective Packet Discard (SPD) feature applies some simple choices to selectively discard packets likely to be unimportant for routing and interface stability. SPD is enabled by default; there are no commands or configuration tasks required.

Through the switching process, the router determines the next hop toward the destination address. Switching moves traffic from an input interface to one or more output interfaces. Switching is optimized and has lower latency than routing because it can move packets, frames, or cells from buffer to buffer with simpler determination of the source and destination of the traffic. It saves resources because it does not involve extra lookups. The figure below illustrates the basic switching process. 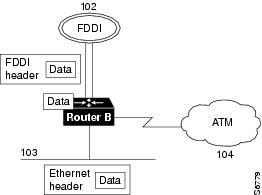 The destination address is stored in tables such as ARP tables for IP or AARP tables for AppleTalk. If there is no entry for the destination, the router will either drop the packet (and inform the user if the protocol provides that feature) or discover the destination address by some other address resolution process, such as through ARP. Layer 3 IP addressing information is mapped to the Layer 2 MAC address for the next hop. The figure below illustrates the mapping that occurs to determine the next hop.

In process switching the first packet is copied to the system buffer. The router looks up the Layer 3 network address in the routing table and initializes the fast-switch cache. The frame is rewritten with the destination address and sent to the outgoing interface that services that destination. Subsequent packets for that destination are sent by the same switching path. The route processor computes the cyclical redundancy check (CRC).

When packets are fast switched, the first packet is copied to packet memory and the destination network or host is found in the fast-switching cache. The frame is rewritten and sent to the outgoing interface that services the destination. Subsequent packets for the same destination use the same switching path. The interface processor computes the CRC. Fast switching is described in the Configuring Fast Switching module.

In distributed switching, the switching process occurs on VIP and other interface cards that support switching. When distributed Cisco Express Forwarding is enabled, line cards, such as VIP line cards or GSR line cards, maintain an identical copy of the FIB and adjacency tables. The line cards perform the express forwarding between port adapters, relieving the RSP of involvement in the switching operation. distributed Cisco Express Forwarding uses an Inter Process Communication (IPC) mechanism to ensure synchronization of FIBs and adjacency tables on the RP and line cards.

The figure below illustrates the distributed switching process on the Cisco 7500 series. 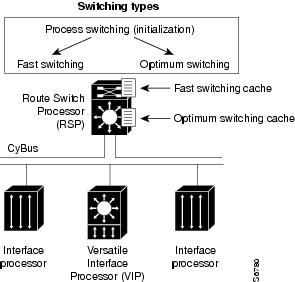 Performance is derived from the switching mechanism you are using. Some Cisco IOS features require special handling and cannot be switched until the additional processing they require has been performed. This special handling is not processing that the interface processors can do. Because these features require additional processing, they affect switching performance. These features include the following:

Queueing occurs when network congestion occurs. When traffic is moving well within the network, packets are sent as they arrive at the interface. Cisco IOS software implements four different queueing algorithms as follows:

You can define access lists to control access to or from a router for a number of services. You could, for example, define an access list to prevent packets with a certain IP address from leaving a particular interface on a router. How access lists are used depends on the protocol. For information on access lists, refer to the appropriate Cisco IOS configuration guide for the protocol you are using.

Encryption algorithms are applied to data to alter its appearance, making it incomprehensible to those not authorized to see the data. For information about encryption features available with the Cisco IOS software, refer to the Cisco IOS Security Configuration Guide.

LIB --label information base. A database used by a label switch router (LSR) to store labels learned from other LSRs, as well as labels assigned by the local LSR.