This module contains information about and instructions for configuring network accounting for Cisco Express Forwarding. Accounting produces the statistics that enable you to better understand Cisco Express Forwarding patterns in your network. For example, you might want to find out the number of packets and bytes switched to a destination or the number of packets switched through a destination.

If Cisco Express Forwarding is not enabled on your platform, the output for the show ip cefcommand looks like this:

See the Additional References for links to more information on the features and functionality of Cisco Express Forwarding.

The following sections explain how to collect and view the TMS using the command-line interface (CLI) and the NDA. For detailed instructions on using the NDA, see the Network Data Analyzer Installation and User Guide .

TMS enables an administrator to capture and analyze data on traffic entering a backbone that is running BGP. The TMS feature also allows an administrator to determine the neighbor autonomous systems of a BGP destination. TMS are counted during packet forwarding by Cisco Express Forwarding nonrecursive accounting.

A BGP network deployed by a service provider might have the following components:

The packets forwarded based on a nonrecursive Cisco Express Forwarding entry can be split into two bins based on whether the input interface of the backbone router is configured as internal or external. Thus, all packets that arrive on external interfaces (external to the region of interest) and are forwarded based on a given IGP route (either directly or through a recursive BGP route) are counted together.

The following example shows how Cisco Express Forwarding nonrecursive accounting counts packets when BGP routes resolve to one IGP route and when they do not.

A multiaccess network access point (NAP) has BGP routes referring to hosts on the NAP network. 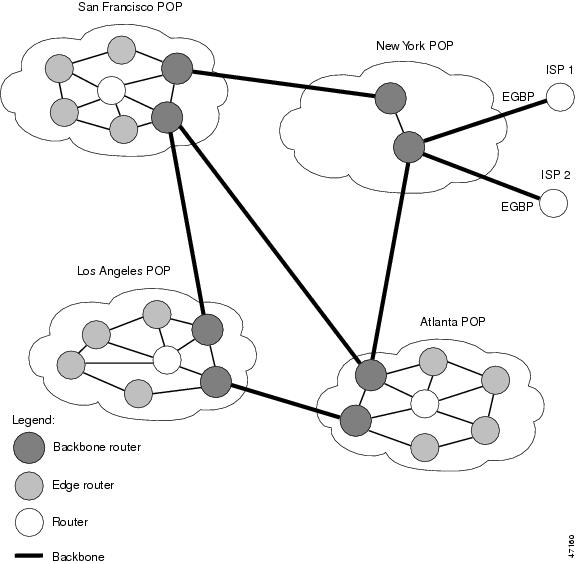 The figure below shows the following types of traffic that travel through the backbone router: 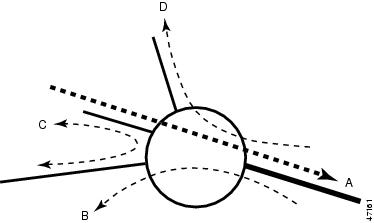 External traffic (path A in the figure above) is the most important for determining the amount of traffic that travels through a backbone router. Internal traffic (paths B and D in the figure above) is useful for ensuring that you are capturing all of the TMS data. When you receive a snapshot of the TMS, the packets and bytes are displayed in internal and external categories.

Once TMS are collected, you have three options for viewing the data:

The NDA collects TMS from the backbone router and displays the data through the NDA Display module. The TMS can look similar to the data shown in the two figures below. The display format depends on the aggregation scheme you select. See the Network Data Analyzer Installation and User Guide for more information.

(The view of data that the NDA Display module provides is wide. Slide the scroll bar to the right and left to see all of the data. The two figures below taken together show all of the columns of data.) 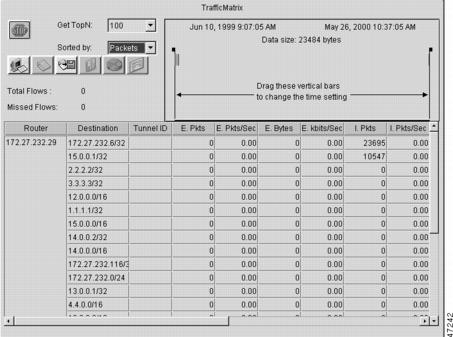 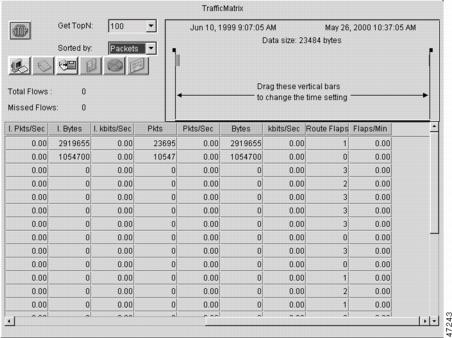 You can use the show ip cef command to display nonrecursive accounting information, including the counts of internal and external packets and bytes that have traveled through the IP prefix address/mask (in the format a.b.c.d/len) for an IGP route. Here is an example that shows 0 packets and 0 bytes of external traffic and 1144 packets and 742 bytes of internal traffic for the router with the IP address 10.102.102.102:

Statistics in the timestats File

Before you perform the task to interpret the statistics in the tmstats_ascii file (an optional procedure described in the Interpreting the tmstats File section), you need to understand the following:

Virtual Files on the Backbone Router

You can read TMS that reside on the backbone router and are stored in the following virtual files:

The binary file tmstats_binary contains the same information as the ASCII file, except in a space-efficient format. You can copy this file from the router and read it with any utility that accepts files in binary format.

The tmstats_ascii file header provides the address of the backbone router and information about how much time the router used to collect and export the TMS data. The header occupies one line and uses the following format:

The table below describes the fields in the file header of the tmstats_ascii file.

The destination prefix record displays the internal and external packets and bytes for the IGP route and uses the following format:

The per-prefix records display information only about label switched traffic data. Label forwarding across a backbone router or switch, is based on either dynamic label switching or traffic engineered paths.

The table below describes the fields in the destination prefix record.

The tunnel midpoint record displays the internal and external packets and bytes for the tunnel head and uses the following format:

The table below describes the fields in the tunnel midpoint record.

Statistics in the tmsasinfo File

Before viewing the statistics in thetmsasinfo file (an optional procedure described in the Viewing Information in the tmsasinfo File), you need to understand the following:

The table below describes the fields in the file header.

Neighbor AS Record in the tmsasinfo File

The neighbor AS record displays the neighbor AS and the underlying prefix/mask for each BGP route. The record uses the following format:

The table below describes the fields in the neighbor AS record.

How to Configure CEF Network Accounting

When you enable network accounting for Cisco Express Forwarding from the global configuration mode, accounting information is collected on the RP.

When you enable network accounting for distributed Cisco Express Forwarding from the global configuration mode, accounting information grouped by IP prefix (recursive or nonrecursive) is not sent to the RP, but is collected on the line card.

You can perform these tasks either through the CLI or through the NDA. The following sections explain each procedure:

Using the CLI to Enable a Backbone Router to Collect TMS

Perform the following task to use the CLI to enable a backbone router to collect TMS.

8.    Repeat Steps 5, 6, and 7 for each incoming interface that you want to configure for TMS.

Enabling the NDA to Collect TMS on a Backbone Router

Perform the following task to enable the NDA to collect TMS on a backbone router.

You can use the NDA to enable TMS collection and to set the incoming interfaces on the backbone router to collect internal or external traffic data.

1.    Open the Traffic Matrix Statistics Control window in the NDA.

5.    Select the TMS tab in the Router Configuration window in the NDA.

6.    Set internal and external interfaces on the router.

2.    Interpret the header and record information in the tmstats_ascii file.

Viewing Information in the tmsasinfo File

Perform the following task to view information in the tmsasinfo file about BGP neighbor autonomous systems (ASs) for IGP destinations.

2.    View the header and record information in the tmasinfo file.

Perform the following task to verify that Cisco Express Forwarding networking accounting information is as you expected.

The following example shows how to enable the collection of Cisco Express Forwarding accounting information:

The following example shows how to enable a backbone router to collect TMS data:

The following example shows the contents of tmstats_ascii file:

AS --autonomous system. A collection of networks under a common administration sharing a common routing strategy. Autonomous systems are subdivided by areas. An autonomous system must be assigned a unique 16-bit number by the Internet Assigned Numbers Authority (IANA).

TE --traffic engineering. Techniques and processes that cause routed traffic to travel through the network on a path other than the one that would have been chosen if standard routing methods were used.

TMS --Traffic Matrix Statistics. An IOS feature that enables an administrator to capture and analyze traffic data entering a backbone that is running the Border Gateway Protocol (BGP). This feature also allows an administrator to determine the neighbor autonomous systems of a BGP destination