BGP requires that all iBGP speakers be fully meshed. However, this requirement does not scale well when there are many iBGP speakers. Instead of configuring a confederation, another way to reduce the iBGP mesh is to configure a route reflector. 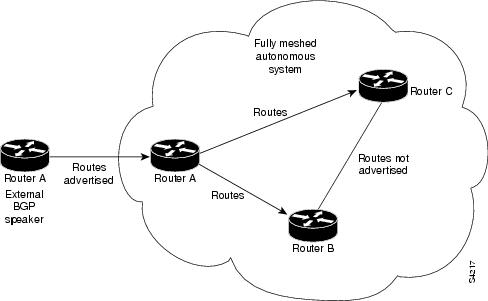 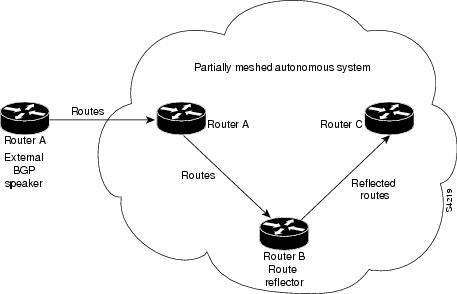 The figure below illustrates a more complex route reflector scheme. Router A is the route reflector in a cluster with routers B, C, and D. Routers E, F, and G are fully meshed, nonclient routers. 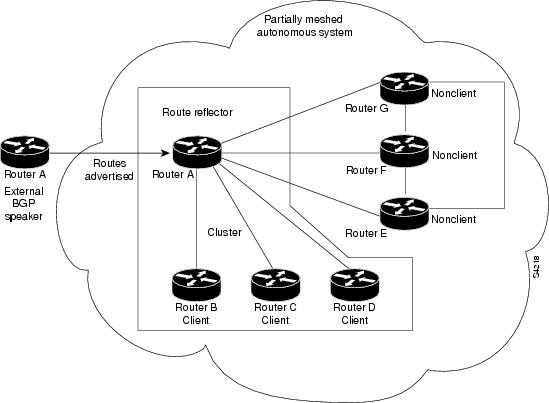 When the route reflector receives an advertised route, depending on the neighbor, it takes the following actions:

As the iBGP learned routes are reflected, routing information may loop. The route reflector model has the following mechanisms to avoid routing loops:

The BGP Outbound Route Map on Route Reflector to Set IP Next Hop feature allows a route reflector to modify the next hop attribute for a reflected route.

Configuring an RR with an outbound route map allows a network administrator to modify the next hop attribute for a reflected route. By configuring a route map with the set ip next-hop clause, the administrator puts the RR into the forwarding path, and can configure iBGP multipath load sharing to achieve load balancing. That is, the RR can distribute outgoing packets among multiple egress points. See the “Configuring iBGP Multipath Load Sharing” module.

Route dampening is a BGP feature designed to minimize the propagation of flapping routes across an internetwork. A route is considered to be flapping when its availability alternates repeatedly.

The following terms are used when describing route dampening:

BGP Route Map Next Hop Self

The BGP Route Map Next Hop Self feature provides a way to override the settings for bgp next-hop unchanged and bgp next-hop unchanged allpath selectively. These settings are global for an address family. For some routes this may not be appropriate. For example, static routes may need to be redistributed with a next hop of self, but connected routes and routes learned via Interior Border Gateway Protocol (IBGP) or Exterior Border Gateway Protocol (EBGP) may continue to be redistributed with an unchanged next hop.

The ip next-hop self setting is applicable only to VPNv4 and VPNv6 address families. Routes distributed by protocols other than BGP are not affected.

How to Configure Internal BGP Features

In order to treat the neighbors from other autonomous systems within the confederation as special eBGP peers, use the following command in router configuration mode:

For an alternative way to reduce the iBGP mesh, see "Configuring a Route Reflector."

To configure a route reflector and its clients, use the following command in router configuration mode:

If the cluster has more than one route reflector, configure the cluster ID by using the following command in router configuration mode:

Use the show ip bgp command to display the originator ID and the cluster-list attributes.

This task configures the RR (Router 2) in the scenario illustrated in the figure below. In this case, Router 1 is the iBGP peer whose routes’ next hop is being set. Without a route map, outbound routes from Router 1 would go to next hop Router 3. Instead, setting the next hop to the RR’s address will cause routes from Router 1 to go to the RR, and thus allow the RR to perform load balancing among Routers 3, 4, and 5.

Figure 4. Route Reflector Using a Route Map to a Set Next Hop for an iBGP Peer

To adjust BGP timers for all neighbors, use the following command in router configuration mode:

To adjust BGP keepalive and hold-time timers for a specific neighbor, use the following command in router configuration mode:

To clear the timers for a BGP neighbor or peer group, use the no form of the neighbor timers command.

To configure the router to consider a path with a missing MED attribute as the worst path, use the following command in router configuration mode:

To configure the router to consider the MED value in choosing a path, use the following command in router configuration mode:

The following example compares route A with these paths:

In this case, path 1 would be chosen if the bgp bestpath med confed router configuration command is enabled. The fourth path has a lower MED, but it is not involved in the MED comparison because there is an external autonomous system is in this path.

To configure the router to use the MED to choose the best path from among paths advertised by a single subautonomous system within a confederation, use the following command in router configuration mode:

Perform this task to enable and configure BGP route dampening.

You can monitor the flaps of all the paths that are flapping. The statistics will be deleted once the route is not suppressed and is stable for at least one half-life. To display flap statistics, use the following commands as needed:

To clear BGP flap statistics (thus making it less likely that the route will be dampened), use the following commands as needed:

Once a route is dampened, you can display BGP route dampening information, including the time remaining before the dampened routes will be unsuppressed. To display the information, use the following command:

You can clear BGP route dampening information and unsuppress any suppressed routes by using the following command:

This example shows how BGP community attributes are used with a BGP confederation configuration to filter routes.

In this example, the route map named set-community is applied to the outbound updates to neighbor 172.16.232.50 and the local-as community attribute is used to filter the routes. The routes that pass access list 1 have the special community attribute value local-as. The remaining routes are advertised normally. This special community value automatically prevents the advertisement of those routes by the BGP speakers outside autonomous system 200.

Example: Route Reflector Using a Route Map to Set a Next Hop for an iBGP Peer

The following example is based on the figure above. Router 2 is the route reflector for the clients: Routers 1, 3, 4, and 5. Router 1 is connected to Router 3, but you don’t want Router 1 to forward traffic destined to AS 200 to use Router 3 as the next hop (and therefore use the direct link with Router 3); you want to direct the traffic to the RR, which can load share among Routers 3, 4, and 5.

This example configures the RR, Router 2. A route map named rr-out is applied to Router 1; the route map sets the next hop to be the RR at 10.2.0.1. When Router 1 sees that the next hop is the RR address, Router 1 forwards the routes to the RR. When the RR receives packets, it will automatically load share among the iBGP paths. A maximum of five iBGP paths are allowed.

This section contains an example of how to configure BGP Route Map next-hop self.