This module also explains some common scenarios that require customizing IPv4 broadcast packet handling by routers. For example, UDP forwarding of Dynamic Host Configuration Protocol (DHCP) traffic to ensure broadcast packets sent by DHCP clients can reach DHCP servers that are not on the same network segment as the client. Configuration tasks and examples are also provided in this module.

An IP unicast address is not a broadcast addresses. A packet with an unicast destination IP address is intended for a specific IP host. For example, 172.16.1.1/32. Only the intended host of a unicast packets receives and processes the packet. This term is often used in conjunction with references to types of IP broadcast traffic. For example, a network administrator considering upgrading a router in a network must consider the amount of unicast, multicast, and broadcast traffic because each type of traffic can have a different effect on the performance of the router.

An IP directed broadcast packet is routed through the network as a unicast packet until it arrives at the target subnet, where it is converted into a Layer 2 broadcast frame (MAC address of FFFF.FFFF.FFFF). Because of the nature of the IP addressing architecture, only the last router in the chain, the one that is connected directly to the target subnet, can conclusively identify a directed broadcast. For example, only a router with an interface connected to a network using an IP address in the 172.16.0.0/16 address space such as 172.16.1.1/16 can determine that a packet sent to 172.16.255.255 is a directed broadcast and convert it to a Layer 2 broadcast that is received by all hosts on the local network. The other routers in the network that are not connected to the 172.16.0.0/16 network forward packets addressed to 172.16.255.255 as if they were for a specific IP host.

Information on configuring network devices for IP multicast support is available in the following documentation:

You can enable forwarding of UDP broadcast packets, such as DHCP requests, to a host, or to multiple hosts on the same target network. When a UDP broadcast packet is forwarded, the destination IP address is rewritten to match the address that you configure. For example, the ip helper-address 172.16.10.2 command rewrites the IP destination address from 255.255.255.255 to 172.16.10.2.

You can allow IP broadcasts to be flooded throughout your network in a controlled fashion using the database created by theLayer 2 bridging Spanning Tree Protocol (STP). Enabling this feature also prevents flooding loops. In order to support this capability, the Cisco IOS software on your router must include support for transparent bridging, and transparent bridging must be configured on each interface that is to participate in the flooding. If bridging is not configured on an interface, the interface is still able to receive broadcasts. However, the interface will never forward broadcasts it receives, and the router will never use that interface to send broadcasts received on a different interface.

Packets that are forwarded to a single network address using the IP helper address mechanism can be flooded. Only one copy of the packet is sent on each network segment.

In order to be considered for flooding, packets must meet the following criteria. (These are the same conditions used to consider packet forwarding using IP helper addresses.)

After a decision has been made to send the datagram out on an interface (and the destination IP address possibly changed), the datagram is handed to the normal IP output routines and is, therefore, subject to access lists if they are present on the output interface.

If no actual bridging is desired, you can configure a type-code bridging filter that will deny all packet types from being bridged. Refer to the "Configuring Transparent Bridging" module of the Cisco IOS Bridging and IBM Networking Configuration Guide for more information about using access lists to filter bridged traffic. The Spanning-Tree database is still available to the IP forwarding code to use for the flooding.

You can accelerate flooding of UDP datagrams using the spanning-tree algorithm. Used in conjunction with the ip forward-protocol spanning-tree command in global configuration mode, this feature boosts the performance of spanning-tree-based UDP flooding by a factor of about four to five times. The feature, called turbo flooding, is supported over Ethernet interfaces configured for Advanced Research Projects Agency (ARPA) encapsulated, FDDI, and high-level data link control (HDLC)-encapsulated serial interfaces. However, it is not supported on Token Ring interfaces. As long as the Token Rings and the non-HDLC serial interfaces are not part of the bridge group being used for UDP flooding, turbo flooding will behave normally.

If a helper address is specified and UDP forwarding is enabled, broadcast packets destined to the following port numbers are forwarded by default:

This case study is from a trading floor application in a financial company. The workstations (WS1, WS2, and WS3) in the following figure receive financial data from the feed network. The financial data is sent using UDP broadcasts. 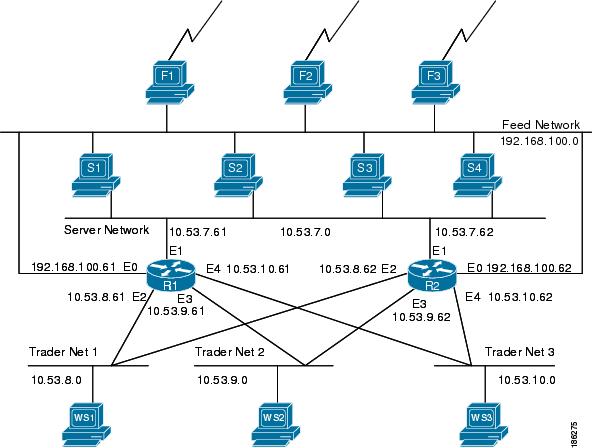 The following sections explain the possible solutions for this application:

The first option is UDP broadcast packet using helper addresses. To configure helper addressing, you must specify the ip helper-address command on every interface on every router that receives a UDP broadcast that needs to be forwarded. On router 1 and router 2 in the figure below, IP helper addresses can be configured to move data from the server network to the trader networks. However IP helper addressing was determined not to be an optimal solution for this type of topology because each router receives unnecessary broadcasts from the other router, as shown in the figure below. 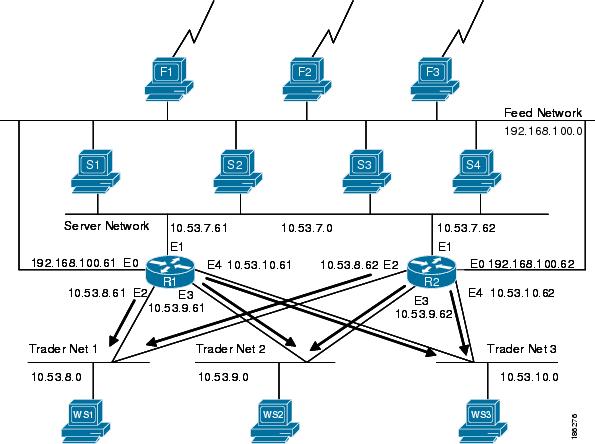 When IP helper addressing is used in this type of topology, no more than one router can be configured to forward UDP broadcasts (unless the receiving applications can handle duplicate broadcasts). This is because duplicate packets arrive on the trader network. This restriction limits redundancy in the design and can be undesirable in some implementations.

To configure routers to send UDP broadcasts bidirectionally in this type of topology, a second ip helper address command must be applied to every router interface that receives UDP broadcasts. As more segments and devices are added to the network, more ip helper address commands are required to reach them, so the administration of these routers becomes more complex over time.

Although IP helper addressing is well-suited to nonredundant, nonparallel topologies that do not require a mechanism for controlling broadcast loops, IP helper addressing does not work well in this topology. To improve performance, the network designers considered four other alternatives:

Before you can enable UDP flooding, the router must be running software that supports transparent bridging and bridging must be configured on each interface that is to participate in the flooding. If bridging is not configured for an interface, the interface will receive broadcasts, but the router will not forward those broadcasts and will not use that interface as a destination for sending broadcasts received on a different interface.

With one router forwarding broadcast traffic from the server network to the trader networks, you should configure the other router to forward unicast traffic. For that reason, each router enables the ICMP Router Discovery Protocol (IRDP), and each workstation on the trader networks runs the IRDP daemon. On router 1, the preference keyword of the ip irdp command sets a higher IRDP preference than does the configuration for router 2, which causes each IRDP daemon to use router 1 as its preferred default gateway for unicast traffic forwarding. Users of those workstations can use the netstat -rn command to see how the routers are being used.

On the routers, the holdtime, maxadvertinterval, and minadvertinterval keywords of the ip irdp command reduce the advertising interval from the default so that the IRDP daemons running on the hosts expect to see advertisements more frequently. With the advertising interval reduced, the workstations will adopt router 2 more quickly if router 1 becomes unavailable. With this configuration, when a router becomes unavailable, IRDP offers a convergence time of less than one minute.

IRDP is preferred over the Routing Information Protocol (RIP) and default gateways for the following reasons:

The figure below shows how data flows when the network is configured for UDP flooding. 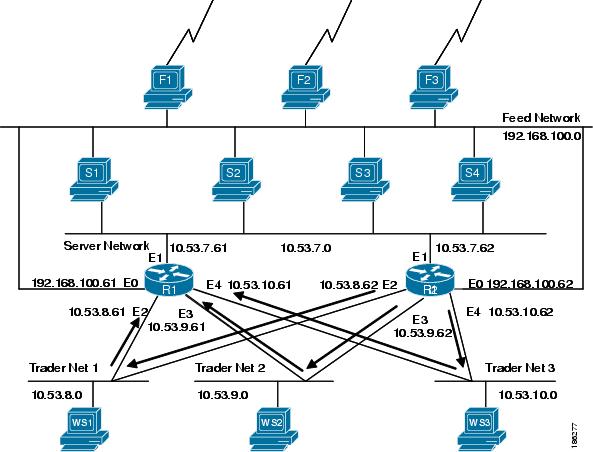 If the hosts on the trader networks do not support IRDP, Hot Standby Routing Protocol (HSRP), Virtual Router Redundancy Protocol (VRRP), or Gateway Load Balancing Protocol (GLBP) can be used to select which router will handle unicast traffic. These protocols allow the standby router to take over quickly if the primary router becomes unavailable.

Enable turbo flooding on the routers to increase the performance of UDP flooding.

Perform this task to permit the forwarding of IP directed broadcasts from any source.

Perform this task to limit the forwarding of IP directed broadcasts by applying an access list to the ip directed-broadcast command.

Enabling Forwarding of UDP Broadcast Packets to a Specific Host

Perform this task to enable UDP broadcast packet forwarding to a single host.

Enabling Forwarding of UDP Broadcast Packets to a Range of Hosts

Changing the Default IP Broadcast Address for All Interfaces to 0.0.0.0 on Routers Without Nonvolatile Memory

For additional information on setting the hardware jumpers on your router, see the hardware documentation that was supplied with you router.

Changing the Default IP Broadcast Address for All Interfaces to 0.0.0.0 on Routers with Nonvolatile Memory

Information on configuring other behaviors with the software configuration registers using the config-register command is available in the following documentation:

Perform this task to set the IP broadcast address on every interface to 0.0.0.0 while maintaining the remainder of the default values for the software configuration register settings.

The version of Cisco IOS software on your router must support transparent bridging.