Easy Virtual Network (EVN) is an IP-based virtualization technology that provides end-to-end virtualization of two or more Layer-3 networks. You can use a single IP infrastructure to provide separate virtual networks whose traffic paths remain isolated from each other.

Prior to network virtualization, path isolation can be achieved by:

It is not uncommon to have different user groups running on the same IP infrastructure. Various business reasons require traffic isolation between different groups. The figure below shows two user groups, Red and Green, running on the same network. Prior to network virtualization, there is no separation of traffic between the two groups. Users in the Red user group can access the server in the Green user group, and vice versa.

Without network virtualization, path isolation can be achieved by using access control, which is expensive to maintain, prone to error and does not support unique routing and forwarding tables per network. 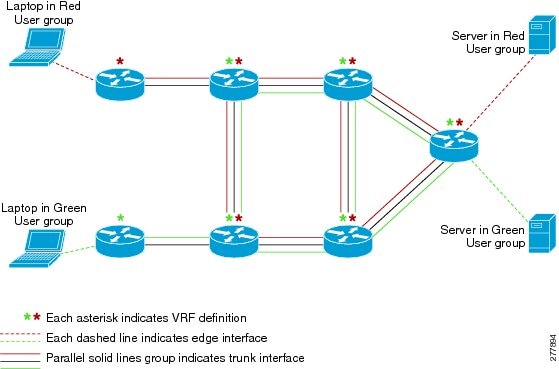 In addition to utilizing VRFs to provide device-level separation, each virtual network has path isolation from the other. Path isolation is achieved by tagging the traffic so it carries the same tag value throughout the same virtual network. Each network device along the path uses the tags to provide separation among different VRFs. A single tag number ties VRF red, for example, on one router to VRF red on another router.

Each VPN and associated EVN has a tag value that you assign during configuration. The tag value is global, meaning that on each router, the same EVN must be assigned the same numerical tag value. Tag values range from 2 to 4094.

An EVN is allowed on any interface that supports 802.1q encapsulation, such as Fast Ethernet, Gigabit Ethernet, and port channels. To allow for backward compatibility with the VRF-Lite solution, the vLAN ID field in the 802.1q frame is used to carry the virtual network tag.

Tags are illustrated in the following configuration with two VRFs, red and green:

User devices are connected to a Layer 2 switch port, which is assigned to a VLAN. A VLAN can be thought of as a Layer 2 VPN. Customers will group all of the devices that need to be supported in a common Layer 3 VPN in a single VLAN. The point where data traffic is handed off between a VLAN and VRF is called an edge interface. 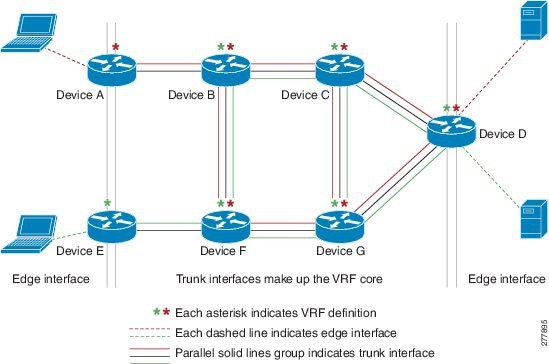 A trunk interface can carry traffic for multiple EVNs. To simplify the configuration process, all the subinterfaces and associated EVNs have the same IP address assigned. In other words, a trunk interface is identified by the same IP address in different EVN contexts. This is because each EVN has a unique routing and forwarding table, thereby enabling support for overlapping IP addresses across multiple EVNs.

Relationship Between VRFs Defined and VRFs Running on a Trunk Interface

By default, the trunk interfaces on a router will carry traffic for all VRFs defined by the vrf definition command. For example, in the following configuration, every VRF defined on the router is included on the interface:

In the following example, only the two specified VRFs on the list (red and green) are enabled on the interface:

By contrast, a device that can send and receive tagged traffic and therefore takes the tag value into account when processing such traffic is known as VRF aware. For example, a VRF-aware server shared among different EVNs could use the virtual network tag to distinguish requests received and send responses. A VRF-aware device is connected to the EVN using a trunk interface, as shown in figure 4. 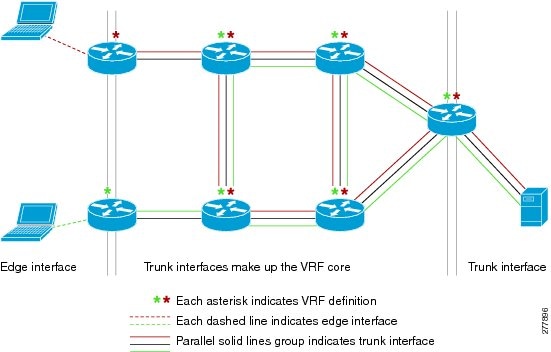 Each EVN runs a separate instance of a routing protocol. This allows each EVN to fine-tune its routing separately and also limits fate sharing. Different virtual networks may run different routing protocols concurrently.

Packet Flow in a Virtual Network

On the edge interface, the EVN associated with the interface is used for route lookup. On the trunk interface, the virtual network tag carried in the packet is used to locate the corresponding EVN for routing the packets.

The figure below illustrates how traffic from two VRFs, red and green, can coexist on the same IP infrastructure, using the tags 101 and 102. 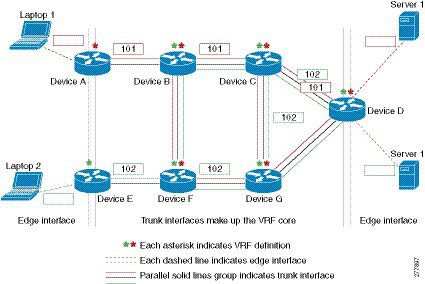 The packet flow from Laptop 1 to Server 1 in VRF red occurs as follows:

For example, the OSPF hello interval can be set for all EVNs over the trunk interface with one line of configuration, as follows:

The list of commands configured on the trunk interface whose values are inherited by all EVNs running on the same interface is provided in the table in "Commands Whose Values Can be Inherited Or Overridden by a Virtual Network on an Interface" section.

You might want some EVNs on the same trunk interface to have different configurations. An alternative to command inheritance is to selectively override inherited values by using specific commands in virtual network interface mode for individual EVNs. In this mode, the command’s settings override the Cisco default value or the value you set in interface configuration mode.

In interface configuration mode, entering the vnet name command causes the system to enter virtual network interface mode. The system prompt for this mode is Router(config-if-vnet)#.

The list of commands whose inherited values can be overridden is provided in the table in the “Commands Whose Values Can be Inherited Or Overridden by a Virtual Network on an Interface” section in this module.

The show derived command indicates the subinterface changed to a cost of 30:

Example: Enabling an Attribute to vnet Global Only

Similarly, you might want to enable an attribute to vnet global only. To do so, use the vnet global interface submode, as follows:

When the following commands are entered, the OSPF cost value is restored to 20, which is the cost inherited from the trunk interface. (Note that 20 is not the default value of the ip ospf cost command.)

The default keyword entered before a command in virtual network interface mode restores the default state, but the no keyword does not always do that. In the following example, no ip dampening-change eigrp 1 disables dampening change.

Determining if No Form of Command Appears in Configuration File

If a command is the type of command that switches a feature on or off, the no form of the command will appear in the configuration file when configured. That is, nonvolatile generation (NVGEN) overrides the setting from the EVN trunk, as shown in the following example:

If a command takes an argument in its syntax, such as ip ospf cost cost , the no form of the command will remove the configuration, but does not appear in the configuration file. That is, it will not be NVGEN’ed because the user could enter ip ospf cost default-value to override the inherited value in a more direct way.

There may be occasions when you want to issue several EXEC commands to apply to a single EVN. In order to reduce the repetitive entering of VRF names for multiple EXEC commands, the routing-context vrf command allows you to set the VRF context of EXEC commands once, and then proceed using EXEC commands.

EVN is wire compatible with VRF-Lite. In other words, on the outside, 802.1q, SNMP MIBs, and all the EVN infrastructure will look exactly the same as VRF-Lite.

Prior to Cisco IOS Releases 12.2(33)SB and 15.0(1)M, the CLI for a VRF applied to only one address family at a time. For example, the ip vrf blue command applies only to the IPv4 address family.

In Cisco IOS Releases 12.2(33)SB and 15.0(1)M, the CLI for a VRF applies to multiple address families under the same VRF. This is known as multiprotocol VRF. For example, the vrf definition blue command applies to IPv4 and IPv6 VPNs at the same time, but the routing tables for the two protocols are still different.

Quality of Service (QoS) configurations are applied to the main physical interface on an EVN trunk. The QoS policy affects all traffic that flows out the physical interface in all the VRFs at the same time. In other words, QoS and network virtualization are mutually independent. For example, traffic marked with the DSCP value specified for voice will be put into the voice queue if the packet is from the red VRF, blue VRF, or green VRF. The traffic for all the VRFs will be queued together.

As explained in the "Command Inheritance on EVN Trunk Interfaces" section, there are interface commands that are defined once for a trunk interface, and the value is inherited by each EVN sharing the interface. These commands are sometimes referred to as trunk commands.

A subset of the trunk commands are commands whose values can be overridden by specifying the command in virtual network interface mode. This is explained in the "Overriding Command Inheritance Virtual Network Interface Mode" section.

The table below lists interface commands and indicates whether the values are inherited by the EVNs on the interface and whether the commands can be overridden for a specific EVN.