The Cisco WAAS and Cisco WAFS software products use a combination of technologies to allow Windows clients to print, including Samba suite, CUPS, and proprietary Cisco code. Samba offers a Windows-compatible print server solution that runs on a Linux platform. Although most drivers are compatible with Samba, as well as with all of the Microsoft Windows Hardware Quality Labs (WHQL)-signed drivers, there are some discrepancies, and some drivers are not fully compatible with Samba.

This document explains how to troubleshoot and fix many common Samba print driver installation problems using the print utilities tool developed by Cisco. This document contains the following sections:

If the print utilities do not solve your problem, or if you need additional support related to these utilities, see the "Obtaining Documentation and Submitting a Service Request" section.

You can use the Cisco print utilities after you have discovered a printing problem, such as a print form is missing, duplex printing is not available, or the job will not spool.

These troubleshooting utilities do not handle drivers that fail during the installation process itself.

To run the Cisco print utilities, note the following:

We recommend that the Samba print server be accessible over the LAN.

You must first successfully install a print driver on the Samba print server using the Add Printer Wizard.

You must have the same printer installed on both the Samba print server and on a local Windows print server. (The Cisco print utilities must be run from a Windows client machine that has the same driver installed locally.)

The troubleshooting utilities run on Windows XP and Windows 2003 clients.

The Cisco print utilities include the following two utilities that run on a Windows XP or Windows 2003 client:

Resolve many common problems that occur when Windows print drivers are installed on the Samba print server.

This tool facilitates print driver troubleshooting and resolves some common installation problems; however, some drivers are incompatible with Samba. For example, Fiery Drivers incorporated into some printer manufacturer solutions are not compatible with Samba. Other multifunction printers (MFPs) may also have limited functionality when working with Samba and are not supported by WAAS. Certain print drivers with complex features, such as sophisticated paper handling, may not be compatible with the WAAS software.

For information about how to determine if a print driver is compatible with your software, see the "WAAS Print Driver Support and Interoperability" section at the following URL: http://www.cisco.com/en/US/products/ps6870/prod_release_notes_list.html

This section contains the following information about the print_diff utility:

Print processors (EnumPrintProcessors)—Samba does not support EMF printing, so the utility only notifies about the print processors that are supported.

All data that is retrieved from the two print queues is saved in .csv formatted files that can be compared using Excel or a text editor. You will have one output file for the Windows client machine and one for the Samba print server. The output files are saved in the same directory as the print utility. (See the "Sample Output" section.)

Use the following command line syntax to run the print_diff utility:

The print_diff command can be entered as a single line as follows:

Example 1 and Example 2 show the command line and examples of a failed attempt and a successful completion of the print_diff utility.

In this example, the print_diff utility discovers that the printer name for the Samba printer is not valid and displays this error message:

In this example, the print_diff utility successfully compares the driver setup on the Samba server to the Windows driver installation and provides the following report:

When you enter two printers as command-line arguments, all differences in supported Windows print forms (if any) are displayed in the Windows cmd console. In addition, a standard CSV formatted file that contains all of the retrieved data (such as, all possible forms, registry keys, and printer device properties) is created for each printer (Samba and Windows) and is saved in the same directory as the print utility. The CSV output files use the naming convention, print_server_name_queue_name.csv. For example, the CSV filenames for the two printers in the previous examples would be as follows:

The CSV output file contains output similar to the following; 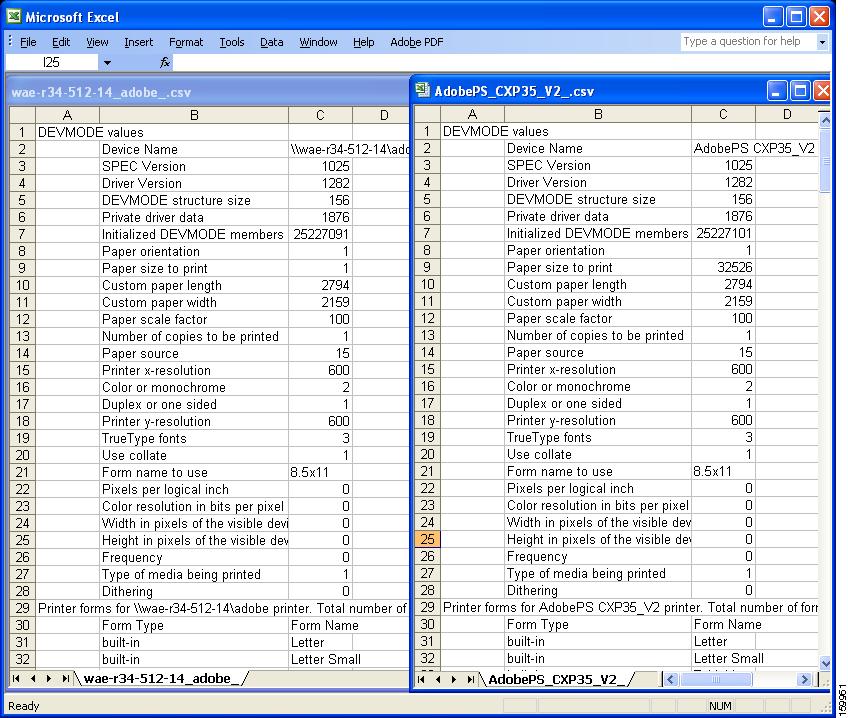 This section contains the following information about the print_fix utility:

The following data is completed by the print_fix utility:

Use the following command line syntax to run the print_fix utility:

The print_fix command can be entered as a single line, as follows:

In this example, the print_fix utility discovers that the printer name for the Samba printer is not valid and displays this error message:

In this example, the utility successfully adds the missing printer or user-specific forms:

To change printing or driver properties, follow these steps:

In the Settings menu, choose Printers and Faxes and the name of the printer that is having the problem.

The driver properties are found under the Advanced tab.

The page orientation is found by clicking Printing Defaults.

Change the paper orientation or one of the driver properties, and click Apply.

Install the same print driver that you installed on the Samba print server on a local Windows XP or 2003 print server. (You must have administrative privileges for installing print drivers locally.)

The Cisco print utilities must be run from a Windows client machine that has the same driver installed locally.

Check to make sure that the driver on the Samba print server is initialized.

Connect to the Samba print server as follows:

From the Windows client command line shell (cmd), connect to the Samba print server with administrative privileges by using the net use command, as shown in the following example:

If you are using a WAFS system, then the admin user is one of the Print Admin group users defined in the Active Directory (AD).

Install the print_diff and print_fix utilities on the Windows client machine:

Create a subdirectory in the Windows client C:\ drive, and name it PrintUtils, for example.

Run the utilities from the PrintUtils directory.

Change the property back to its original setting, and apply the change. Test the printer. If the printer still fails to print, run the print_fix utility.

After you run the print_fix utility, close all open Windows Explorer connections to the Samba print server by using the following command:

(This step applies to WAAS systems only.)

Reconnect to the Samba print server using Windows Explorer, and proceed to Printers and Faxes.

Make sure that the printer you installed is showing in the list of printers and that you can successfully connect to it for printing.

To verify that all missing properties have been added to the Samba print server, you can run the print_diff utility again. You must then test the print driver to verify that missing driver functionality has been restored.