This document describes the different ways to configure the possible ways to block or filter certain multicast traffic on Nexus 7000/9000 switches. It can also be used conserve multicast resources. One of the common examples is Microsoft’s implementation of Universal plug and play operation which uses SSDP to communicate between the servers.

Cisco recommends that you have knowledge of how Any-Source Multicast (ASM) with the use of PIM Sparse mode works on the Nexus platform.

The information in this document was created from devices in specific lab environment. All of the devices used in this document start with a cleared (default) configuration. If you network is in production, make sure that you understand the potential impact of any command. 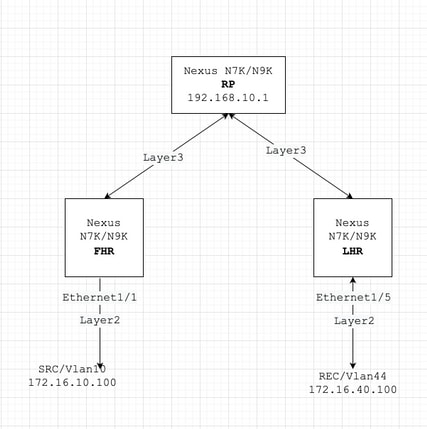 Now, let's discuss the configuration based on the role of the device. For example, FHR, LHR, RP etc.

1. Filter Registration towards the existing RP.

2. Filter Registration towards the RP by defining a bogus RP (which does not exist (For example, 1.1.1.1) for SSDP groups; FHR, in this case, assumes the role of RP.

Above output confirms FHR is not registering the stream to RP.

3. Applying IGMP policy on ingress SVI (where REC resides). The idea here is to filter the IGMP membership reports for SSDP groups from REC.

Above output confirms IGMP membership report is filtered and (*,G) join is not sent to RP.

You can use a combination of option 1 or 2 and 3, depending on your requirement.

Pretty much the same as verification done in point C and D above.

RP – This is Rendezvous Point

6. Registration policy to block the registration of SSDP group from FHR.

Above output confirms (*,G) PIM join is blocked by RP.

Although all the options discussed in section A, B or C; will prevent either FHR, LHR or FHR/LHR to register the stream at RP or prevent sending PIM Join (*,G) towards the RP respectively; a mroute or snooping entry may still be created and it will consume multicast HW entries.

Note: You can use RACL or PACL on ingress SVI or Layer2 interfaces/port-channels/VPC port-channels in case VPC is configured. If SRC/REC are sprayed out in different VLAN or L2 interface, then it also means RACL or PACL will need to be applied on all of those. But, depending HW/SW (mostly due to HW limitation) results may vary.

Configure PACL on ingress Layer2 port or port-channel or VPC port-channel to block SSDP traffic or creation of (S, G) entry on FHR.

Note: Depending on the HW used (Example Nexus N9000), TCAM may need to be carved prior (which requires to reload) to applying the PACL.

Since both multicast traffic/IGMP membership ports are blocked via PACL, you will not see any snooping, mroute entry. Essentially PACL is dropping them both.

You can configure RACL on ingress SVI where SRC exist but depending on SW/HW used; (S, G) entry might still be created or traffic may be forwarded to others local VLANs.

It is pretty much the same as PACL but RACL option may not provide the same results as PACL; mostly it's HW limitation is mentioned earlier as well.