This document describes the Gigabit Passive Optical Network (GPON) technology and how it functions.

GPON is an alternative to Ethernet switching in campus networking. GPON replaces the traditional three-tier Ethernet design with a two-tier optic network by eliminating access and distribution Ethernet switches with passive optical devices. Cisco is introducing GPON with the Catalyst GPON platform. 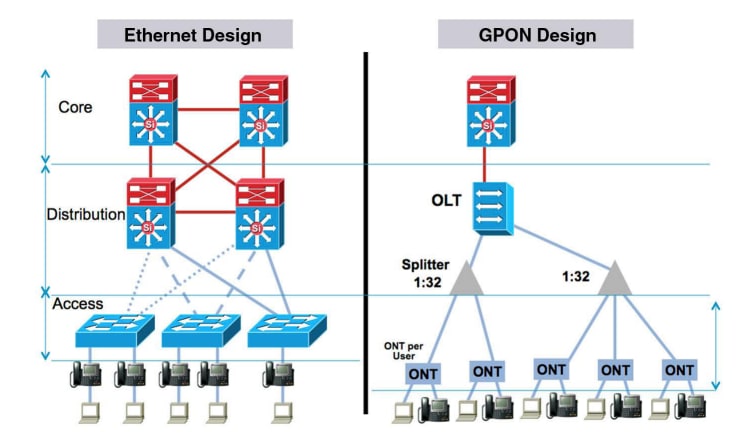 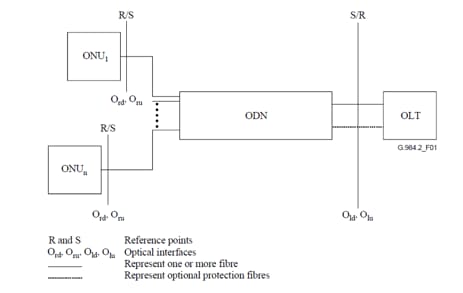 As part of GPON, loss of optical power must be accounted for. This loss can be introduced in a variety of ways, such as:

As shown in the image, the amount of loss incurred from use of various splitters: 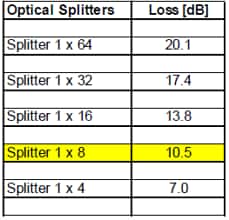 As shown in the image, the minimum and maximum optical path loss per class: 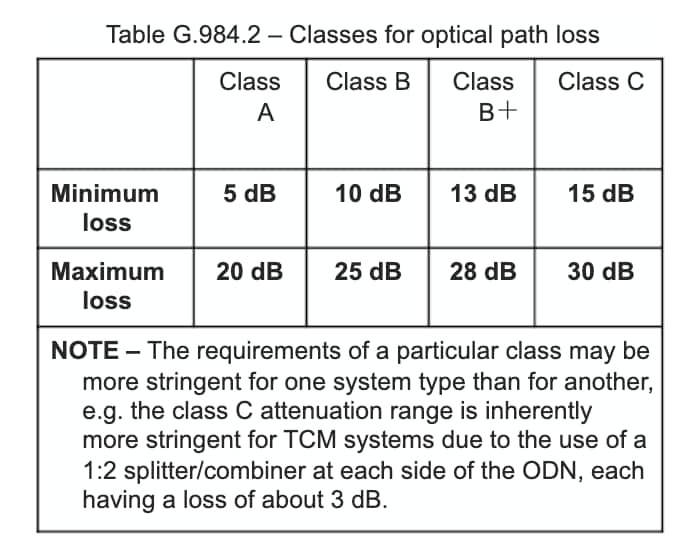 As shown in the image, packets go downstream from the OLT towards various ONUs.

Tip: Downstream is from the perspective of the splitter, you can think of it as traffic headed towards the ONU/ONT, or end users.

As shown in the image, the procedure of downstream packet forwarding.

As shown in the image, an expanded view of the PCBd and what is contained within the GTC payload.

As shown in the image, upstream packet flow from various ONUs to the OLT.

Tip: Upstream can be thought of from the perspective of the splitter, or traffic sent from the ONU/UNT, end users towards the OLT.

As shown in the image, the procedure of upstream packet forwarding.

Note: Upstream frames are sent as bursts, which is comprised of the upstream physical layer overhead (PLOu) and one or more bandwidth allocation interval(s) associated with a specific Alloc-ID

As shown in the image, the difference between a downstream and upstream frame. 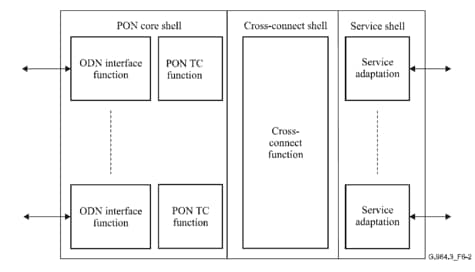 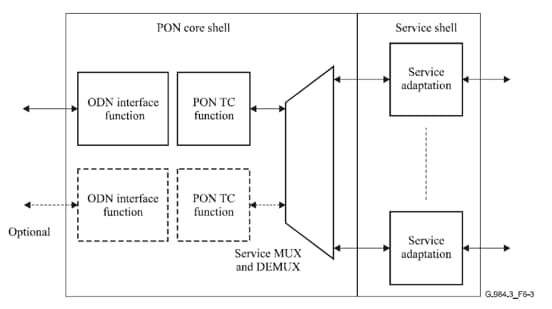 Functional blocks are similar to the OLT. In the scenario that the ONU/OLT operates with a single PON interface (max 2 for protection purposes) the cross-connect function is omitted. Instead of this function, the service MUX and DEMUX are now responsible for traffic.

The GPON protocol has its own stack, just Ethernet or IP.

As shown in the image, the protocol stack for GPON: 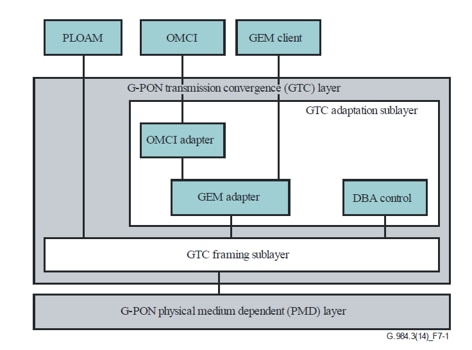 As shown in the image, how an Ethernet frame is mapped to a GEM frame: 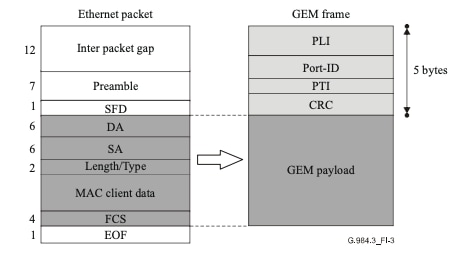 In order to prevent data conflict (collisions), the OLT must be able to precisely measure the distance between itself and each ONU to provide a proper time slot for to facilitate data upstream. This allows the ONUs to send data at specified time slots, to prevent issues upstream. This process is achieved through a technique called ranging.

As shown in the image, a demonstration of what the process achieves, to place all ONU/OLTs at the virtual same distance from the OLT. 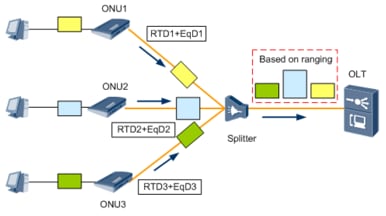 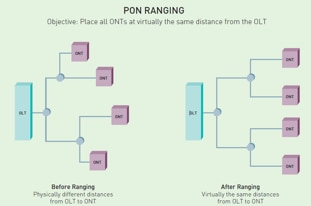 Upstream packet flow is achieved via bursts, with each ONU/ONT responsible for data transmission within its allocated time slots. When an ONU/ONT is not within its time slot, the device disables transmission of its optical transceiver to prevent other ONU/ONT impact.

As shown in the image, a demonstration of different data burst-transmitted, and then recovered:

DBA enables an OLT module to monitor for congestion on the PON network in real-time. This allows the OLT to adjust bandwidth based on a variety of factors, which includes congestion, bandwidth usage, and configuration.

Transmission of digital signals can introduce bit errors and jitter, which can degrade signal transmission quality. GPON can take advantage of FEC, which enables the RX end to check for error bits in the transmission.

Note:FEC is unidirectional and does not support error information feedback.

As shown in the image, the key exchange process: 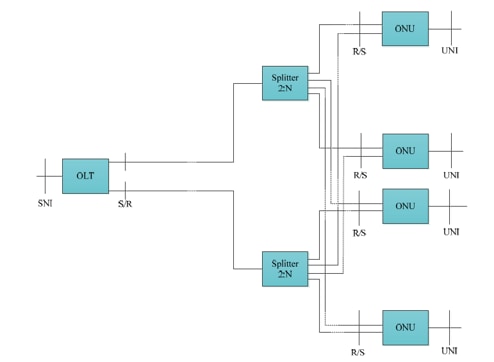