Remote Network Monitoring (RMON) provides information that an administrator can use to monitor, analyze, and troubleshoot a LAN. The Statistics page displays detailed information that regards the size of packets and errors at the physical layer. The information shown is as per the RMON standards.

The objective of this article is to explain how to view the RMON statistics on the 200/300 Series Managed Switches.

Step 1. Log in to the web configuration utility and choose Status and Statistics > RMON > Statistics. The Statistics page opens: 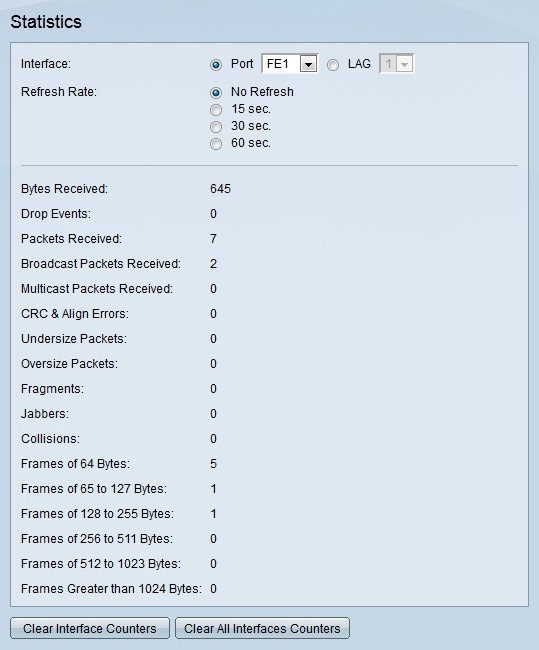 Step 2. Click the radio button that corresponds to the desired interface that you want to display statistics for.

• Port — From the Port drop-down list choose a port.

• LAG — From the LAG drop-down list choose a LAG.

Step 3. Click the radio button that corresponds to the desired time for the statistics to refresh in the Refresh Rate field.

The second area of the page displays RMON statistics for the specified interface.

• CRC & Align Errors — Number of Cyclic Redundancy Check (CRC) and Align errors occurred. CRC and Alignment errors occur when there has been a change in the data from source to destination.

• Undersize Packets — Number of packets received that are smaller than 64 octets.

• Oversize Packets — Number of packets received that are larger than 1518 octets.

• Fragments — Number of fragments (packets with less than 64 octets, which exclude framing bits, but include FCS octets) received.

• Jabbers — Total number received packets that were larger than 1632 octets. This number excludes frame bits, but includes FCS octets that had either a bad FCS with an integral number of octets (FCS Error) or a bad FCS with a non-integral octet (Alignment Error) number.

• Frames of 64 Bytes — Number of frames received that contain 64 bytes.

• Frames greater than 1024 Bytes — Number of frames received that contain from 1024 to 2000 bytes, which includes jumbo frames.

Step 5. (Optional) Click Clear All Interfaces Counters to reset all counters for all interfaces.