The objective of this document is to provide you with best practices when migrating to Multiple Spanning Tree (MSTP). Utilizing MSTP over other Spanning Tree variants can improve network efficiency and reliability.

How this guide is structured

This guide will omit steps like logging into the device via SSH, or the management interface - instead we'll highlight the core commands. Each best practice will contain a sub-task outlining appropriate steps for mixed Cisco hardware (Enterprise & SMB). For configuration guides, see the following two links:

This section is intended to give you an accessible mental model of the protocol at play. The definitions are interlocking components of the MSTP protocol. Further details are contained in the sub-bullet points.

Now that we've established who this article is for and the pertinent definitions, let's get to the best practices.

Best Practice #1 - Validate the need for migrating to MSTP

The first best practice involves confirming your need to migrate to MSTP. Understanding your network's existing spanning tree performance is a key factor in this decision. Migrating to MSTP would be a great option for a few reasons, introducing load sharing, which creates the biggest impact to your network efficiency. If layer 2 traffic has increased ahead of your projections, moving to MSTP can increase usefulness/lifetime of your gear via improved performance. Other considerations could be:

Note: A common misconception is when migrating to Multiple Spanning Tree you must map one VLAN per instance.

Flavors of spanning tree have sprung up, with variations and twists on previous versions. Compared to Per VLAN Spanning Tree (PVST+), MSTP uses less resources (BPDUS, CPU cycles, transmit time) by maintaining instances of Spanning Tree, or logical versions of Spanning Tree. VLAN traffic is enabled to flow through the layer 2 segments of a network. Forwarding for one port (and VLAN), can also block for a different VLAN. On top of that, if a loop forms in one instance, it will not affect the other instance(s).

Once you've validated the need to migrate, ideally, migration is achieved with minimal downtime and existing connectivity is preserved. A little strategy on tackling the migration will go a long way toward ensuring a smooth rollout. To aid with that process, we recommend the following tactical steps.

Be aware of how a change on one switch can affect a different VLAN.

This best practice, and the following one, make good use of all that port documentation. Administrators define an optional parameter on edge ports via the PortFast feature. PortFast prevents Spanning Tree from running on that port. The switch-to-gear facing ports could include a server, workstation, router. The intention is for that port to never bridge the network to another set of open ports. Which could potentially cause loops if the switch received a superior BPDU. Given ports coming online to a network incur a STP calculation on the port, you can save time and CPU load by assigning blocking status ahead of time. It allows the port to rapidly transition to a BPDU sending - forwarding state. Because it has been assigned a status ahead of time.

Note: Ensure ports on the switches are configured for full-duplex transmission.

The CLI commands are presented syntax first, followed by an example of a live command. An extra space has been added after the # to make highlighting for copy > paste a little easier. Text highlighted in blue denotes variables, to be replaced with contextual details from your network. Also note for brevity the only privilege elevation commands we use will be for MSTP Configuration.

One caveat to note, the SMB switches GUI uses a synonym for PortFast - it's known as Fast Link.

Step 2. Select an interface and click the Edit button.

This best practice is an extension of the previous one. If a BPDU Guard enabled port sees that the port receiving any superior, topology changing BPDUs, it immediately shuts the port down via err-disable status. That would require you to access the switch and resolve the situation.

Note: This may seem like one of those best practices that you might be able to skip. Could you get away with it? Maybe, but for the sake of your future-self, make it so. One errant switch brought onto the network and pumping out erroneus BPDUs, could potentially topple your network.

Step 2. Choose the type of interface you wish to edit from the Interface Type drop-down list.

Step 3. Click Go to show only ports or LAGs on the page.

Step 4. Click the radio button of the port or LAG that is connected to the other switch and click Edit. The Edit STP Interface window appears.

Step 5. Click the BPDU Guard Enable checkbox that corresponds to the desired interface type in the Interface field.

Now the ports know their appropriate role, let's move on to instance mapping. For best results, limit the amount of instances you create - note there is some nuance. This is counter to best practice and could dissuade an engineer from MSTP as a solution. You may have valid network design considerations for multiple instances, but be aware the best practice is to have a single instance. Decide what VLANs to map onto the instance(s). Then choose a configuration name and a revision number that will be common to all switches in the network.

Note: When you edit the MSTI VLAN mappings, MSTP restarts.

The VLAN to MSTP Instance page contains the following fields:

Step 2. To add a VLAN to an MSTP instance, select the MST instance, and click Edit.

Step 4. Click Apply. At this point, the MSTP VLAN mappings are established.

The best practice is to place as many switches into a single region as possible. There are no benefits to segmenting the network into multiple regions. As with any routing and switching protocols they require a way to confirm membership to the protocol. The BPDUs sent enable a switch to recognize itself as a member of a particular region. For the bridge to understand their membership of a given region, they must share the following settings:

Homing the bridge within a region on Catalyst Switch - CLI

Homing the bridge within a region on SMB Switch - CLI


Homing the bridge within a region on SMB Switch - GUI

The MSTP Properties page is used to define what region the switch is in. For devices to be in the same region, they must have the same region name and revision value.

Step 2. Enter a name for the MSTP region in the Region Name field. The region name defines the logical boundary of the network. All switches in an MSTP region must have the same configured region name.

Step 3. Enter a revision number in the Revision field. This is a logical number that signifies a revision for the MSTP Configuration. All switches in an MSTP region must have the same revision number.

Note: The IST Active field displays the bridge priority and MAC address of the active switch of the region.See glossary for additional information.

Note: Carefully select the root and a back-up root for each instance.

Placing the root bridge onto the CIST on Catalyst Switch - CLI

Placing the root bridge onto the CIST on SMB Switch - CLI

Placing the root bridge onto the CIST on SMB Switch - GUI

Step 2. Choose an interface from the Interface Type drop-down list.

Step 4. Click the radio button of the port or LAG you want to modify and click Edit. The Edit STP Interface Setting window appears.

Step 5. Click the radio button that corresponds to the desired interface in the Interface field.

Step 6. Ensure STP is checked Enable in the STP field to enable STP on the interface.

Step 7. Check Enable in the Root Guard field to enable Root Guard on the interface. This option provides a way to enforce the root bridge placement in the network. Root Guard is used to prevent a new connected device to take over as root bridge.

Migration Verification - Is this thing on?

At this point, your MSTP implementation and network should be purring along. For the trust-but-verify crowd, you're able to verify MSTP status by performing a frame capture. Then compare the results to your expected documentation.

After performing a packet capturing via Wireshark, you will see Mrecords that contain the instance id. Below is a screenshot of the Mrecord, prior to expansion for additional detail. 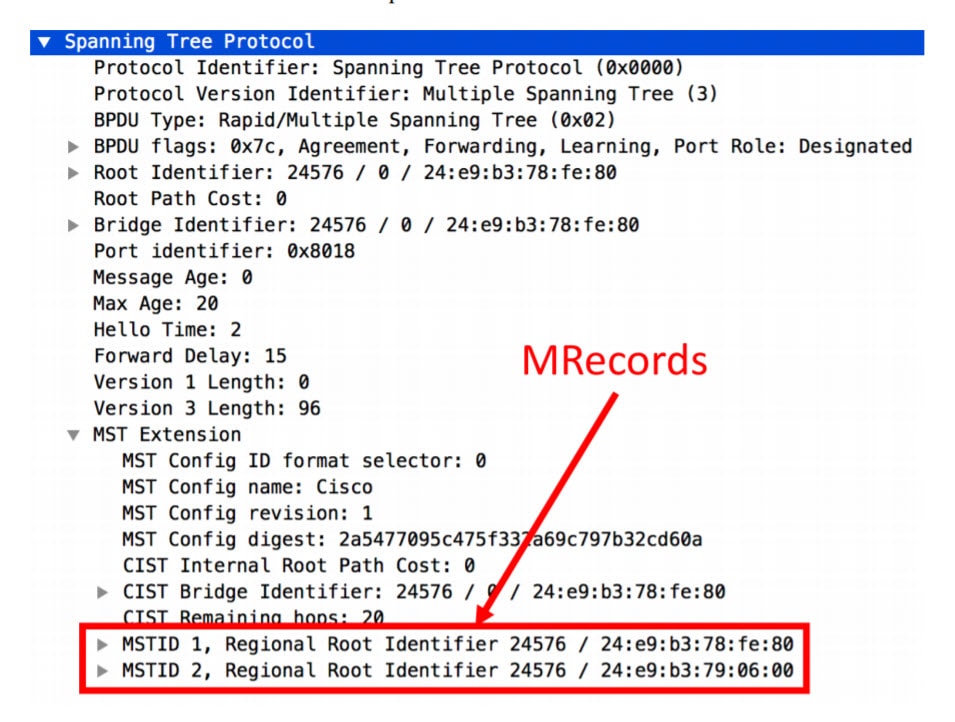 Expanding the Mrecord Allows you to view more granular data about MSTP. Including: 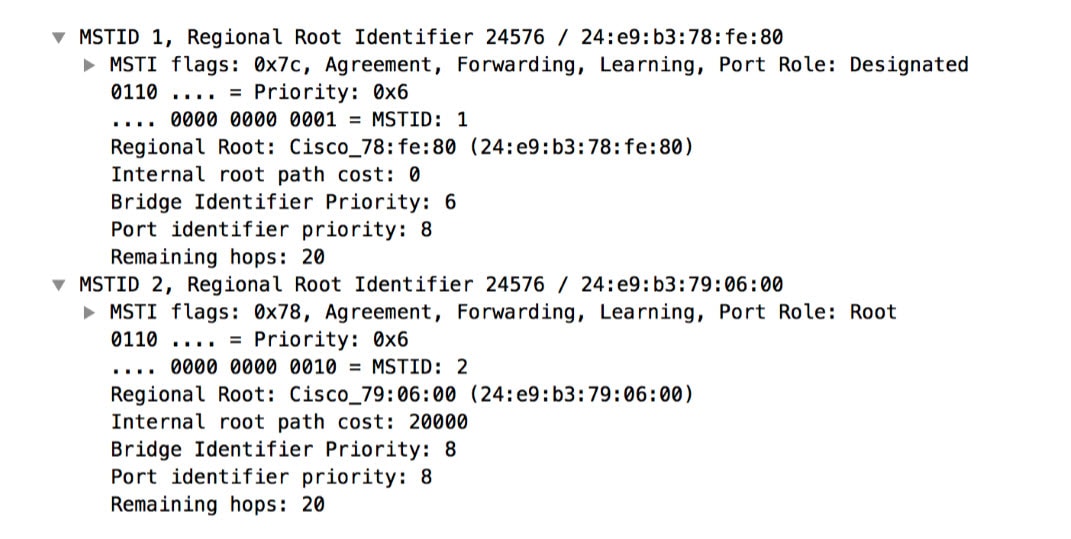 If you'd like to verify from the command line, try these commands:

If you need to continue support for legacy switches running PVST+, handle this on a port by port basis. If one of these switches runs as a VLAN trunk, ensure the MSTP switch is the root for all VLANS assigned to the trunk. Further, MSTP attempts to decode PVST+ BPDUs but this simulation is imperfect. Which requires us to dive into the idea of Boundary Ports.

The role and state of a MSTP boundary port is determined by the Internal Spanning Tree interacting with exterior topology. This means that if a port is in blocking mode on the IST, then it is blocking in all instances of MSTP. This effect cascades into the PVST+ implementation, affecting the VLANs function. The same holds true if the port is forwarding, learning, etc. As you might imagine, this can become an issue. This can result in an intractable issue whereas a port that should be forwarding for one VLAN, is instead blocking, due to the needs of another VLAN. The PVST+ simulation leverages information from the IST to create per VLAN BPDUs. This results in a network wide "illusion" that the MSTP region appears as a single switch to all the VLANs. Similar to the way switches are able to stack, which isn't half bad. What is bad, from the boundary port's position, is that it creates the need to send individual BPDUs for each simulated VLAN. Any inconsistency between BPDUs can tear down the whole simulation in errors. Only receiving consistent BPDUs will allow the simulation to stand itself back up.

To conclude, this whole situation is the reason why the BPDUs received on the boundary port must be identical. For additional reading on this topic, reference this community thread.

Is there anything to know, if my network hardware...isn't entirely Cisco?

MSTP is backwards compatible. As long as your non-Cisco hardware supports Rapid Spanning Tree, you should be alright. If you run into issues, check with our switching community.

Thanks for reading through this guide, with these best practices you should be set to improve performance of your layer-2 network.

Worth noting, spanning tree may not sound thrilling to you, but the benefits of load sharing make it worth the effort for keeping your network efficient. The creator of spanning tree, Radia Perlman, loves it as much as a mother ever could. She even wrote a poem about it.