VLANs allow you to logically segment a LAN into different broadcast domains. In scenarios where sensitive data may be broadcast on a network, VLANs can be created to enhance security by designating a broadcast to a specific VLAN. Only users that belong to a VLAN are able to access and manipulate the data on that VLAN. VLANs can also be used to enhance performance by reducing the need to send broadcasts and multicasts to unnecessary destinations.

The objective of this document is to show you how to configure a basic VLAN via the Command Line Interface (CLI) on CBS250 and CBS350 Series Managed Switches.

Step 1. Enter the following commands to create a VLAN:

The following screenshot shows the steps required to create a VLAN with an ID of 200.

Note: The VLAN information table will vary depending on the type of switch you are using. For example, SF-type switches may have a Type and Authorization field as opposed to a Creators field. The Ports field will also vary since different switches have different port types and numbering schemes.

The created VLAN is displayed:

Assigning a Port to a VLAN

Once the VLANs are created, you need to assign the ports to the appropriate VLAN. You can configure ports using the switchport command and specify whether the port should be in access or trunk mode.

The port modes are defined as follows:

• Access — frames received on the interface are assumed to not have a VLAN tag and are assigned to the VLAN indicated by the command. Access ports are used primarily for hosts and can only carry traffic for a single VLAN.

• Trunk — frames received on the interface are assumed to have VLAN tags. Trunk ports are for links between switches or other network devices and are capable of carrying traffic for multiple VLANs.

Note: By default, all interfaces are in trunk mode, which means they can carry traffic for all VLANs.

Step 1. Enter the following commands to configure an access port:

The following screenshot shows the steps required to configure the Gigabit Ethernet port (gi2) as an access port and assign it to VLAN 200.

Step 3. Enter the following commands to configure a trunk port and specify that only certain VLANs are allowed on the specified trunk:

Note: In trunk mode, all VLANs are allowed by default. Using the switchport trunk allowed vlan add command lets you configure the VLANs allowed on the trunk.

The following screenshot shows the steps required to set the Gigabit Ethernet port (gi3) as a trunk port and add it to VLAN 200:

Step 5. (Optional) Enter the following command to display information about a port: 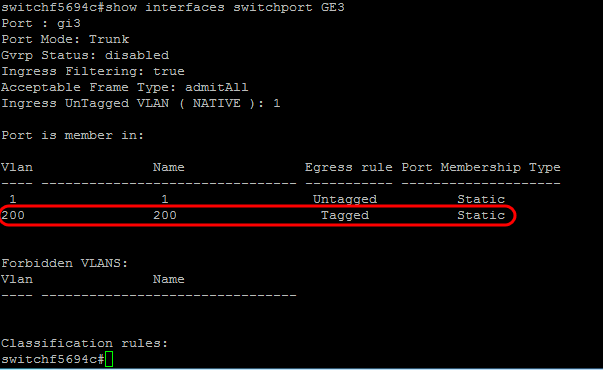