This document describes the use of Cisco Service Assurance Agent (SAA) and Internetwork Performance Monitor (IPM) to measure quality of service (QoS) in Voice over IP (VoIP) networks. This information is based on a real-world IP Telephony project. This document focuses on the application of the products, not on the products themselves. You should already be familiar with Cisco SAA and IPM and have access to the required product documentation. See Related Information for references to other documentation.

When you are managing a large-scale VoIP network, you must have the necessary tools to objectively monitor and report on the voice quality in the network. It is not feasible to rely on user feedback alone, because it is often subjective and incomplete. Voice quality problems typically stem from network QoS problems. So, when you identify voice quality issues, you need a second tool to manage and monitor the network QoS. The example in this document uses Cisco SAA and IPM for this purpose.

QoS Issues in a VoIP Network

It is particularly important that you monitor these figures on an ongoing basis, if packet switched services are used in the WAN (for example, ATM, Frame Relay, or IP Virtual Private Network). There are numerous scenarios where congestion in the carrier network, misconfigured traffic shaping on the edge devices, or misconfigured policing on the carrier side can cause packet loss or excessive buffering. When the carrier is dropping packets, there is no obvious evidence on the edge devices. Therefore, you need an end-to-end tool like Cisco SAA that can inject traffic on the ingress and validate its successful arrival at egress.

There are three Cisco SAA and IPM components:

The RTR probe sends a burst of packets to the RTR responder. The RTR responder turns them around and sends them back to the probe. This simple operation allows the probe to measure packet loss and round trip delay. To measure jitter, the probe sends a control packet to the responder before it initiates the packet burst. The control packet informs the responder how many milliseconds (ms) to expect between each packet in the burst. The responder then measures the inter-packet delay during the burst, and any deviation from the expect interval is recorded as jitter.

The IPM console controls the QoS monitoring. It programs the RTR probes with the relevant information via Simple Network Management Protocol (SNMP). It also collects the results via SNMP. No command-line interface Cisco IOS configuration is required on the RTR probes.

The RTR probes and responders must run Cisco IOS Software Release 12.0(5)T or later. The latest maintenance release of 12.1 mainstream is recommended. The RTR probes and responders in the examples in this document are running release 12.1(4). The IPM version in use is IPM 2.5 for Windows NT. A patch is available on Cisco.com for this version. This patch is important, as it fixes a problem where IPM configures the RTR probes with an incorrect IP Precedence setting.

Before you deploy a Cisco SAA and IPM solution, you must do some design work with these considerations in mind:

There are a number of things to take into consideration when you decide about the placement of probes and responders. First, you want the QoS measurement to cover every site, not just problem sites. This is because the delay and jitter numbers that IPM reports for a given site are most useful when compared to other sites in the same network. Thus, you want to measure sites with good QoS and poor QoS. Also, a well-performing site may become a poor-performing site tomorrow, due to changes in traffic patterns or network changes. You will want to detect this before it affects voice quality and is reported by the users.

Second, CPU utilization is important. An already busy router may not be able to service the RTR component in a timely manner, and this may skew the results. Also, if you place too many probe instances on any single router, you might create high CPU utilization problems even though none existed before. The approach chosen for the example network in this document (and this should work in most networks) is to place the RTR probes on the remote/branch routers. These routers typically connect a single LAN to a relatively slow WAN service. Hence, branch routers often have very low CPU utilization and can easily cope with RTR. The other benefit of this design is that you distribute the load across as many routers as possible. Keep in mind that it is more work to be a probe than to be a responder, as probes take a certain amount of SNMP polling.

With this design, the RTR responders must be placed in the core. The responders will be busier than the probes, because they will be responding to many probes. Thus, a robust design deploys dedicated routers that act solely as responders. Most organizations have retired routers on the shelf that can perform this function. Any router with an Ethernet interface will suffice. Alternatively, the core/distribution routers can double as responders. The network diagram in this section depicts both scenarios.

Spread the load across as many routers as possible, and monitor the RTR CPU usage with this command: 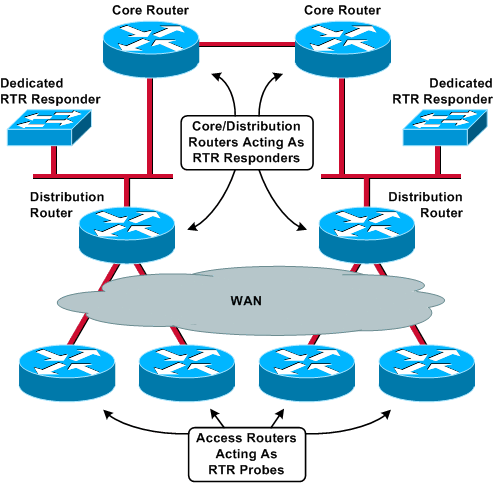 When you are matching probes with responders, it is recommended that you maintain a consistent topology between probe and responder. For example, all probes and responders should be separated by the same number of routers, switches, and WAN links. Only then can IPM results be directly compared among sites.

The bursts of traffic sent by the probes to the responders must be given the same QoS levels by the network as is given to voice. This may mean that you have to adjust the low latency queueing (LLQ) or Routing Table Protocol (RTP) Priority configurations on the router, so that traffic from the RTR probes is subject to strict priority queuing. When you are configuring the probe for RTP packets, only the destination User Datagram Protocol (UDP) port can be controlled and not the source port. A typical LLQ router configuration in this example network has access lists that specifically classify the RTR packets into the same queue as voice:

Be careful that the addition of RTR traffic does not cause the LLQ queues to be over-subscribed and cause real voice packets to be dropped. The standard Default60ByteVoice IPM operation sends bursts of RTP packets with these parameters:

This means that, during a burst, RTR consumes 35.2 Kbs of LLQ bandwidth. If there is not sufficient bandwidth for LLQ, then create a new IPM operation and increase the packet interval. With the parameters shown in this IPM configuration window, a burst consumes only 1 Kbps of bandwidth: 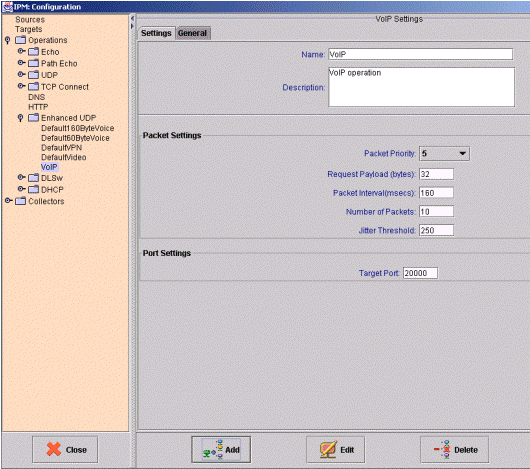 These are the meanings of each of the columns:

This value is the average of all hourly maximums for each day, week, and month in the chart. In other words, for the daily report, IPM takes the largest sample reported within each of the past 24 hours. It then calculates the daily maximum average as the average of these 24 samples.

This is the percentage of samples that were over the configured threshold for the collector.

This is the percentage of packets that encountered an error. A jitter probe reports several types of errors:

The question that arises from this information is what delay, jitter, and error values are acceptable in a VoIP network. Unfortunately, there is no simple answer to this question. Acceptable values depend on codec type, jitter buffer size, and other factors. In addition, there are interdependencies between these variables. A higher packet loss may mean that less jitter can be tolerated.

The best way to obtain workable delay and jitter figures is to compare similar sites in the same network. If all 192 Kbps-attached sites but one report jitter values around 50 ms, and the remaining site reports 100 ms jitter, then there is a problem, regardless of the nominal values. IPM can provide ongoing 24x7 delay and jitter measurement for the entire network, and it can provide a baseline to use as the benchmark for delay and jitter comparisons.

Errors are a different, however. In principle, any error percentage other than zero is a red flag. The RTR packets are given the same QoS treatment as voice packets. If the network QoS and call admission control is robust, no level of congestion should cause packet loss or excessive delay for voice or RTR packets. Therefore, you can expect the IPM error counts to be zero. The only errors that could be considered “normal” are cyclic redundancy check (CRC) errors, but these should be rare in a quality infrastructure. If they are frequent, they constitutes a risk to voice quality.