This White Paper is targeted at server and storage administrators that plan to deploy blade servers with SAN connectivity.
The white paper first highlights the issues faced by server and storage administrators deploying blade servers with SAN connectivity. It then shows how Cisco provides solutions to these problems with its Fibre Channel SAN blade switch. Further, the white paper articulates a comprehensive value-proposition for these customers.

Blade server deployments are gaining popularity among enterprise customers. According to industry analysts, blade servers are the fastest growing segment of the server market, and their numbers are expected to increase significantly in the coming years. To meet their need to centralize storage for power efficiency, ease server replacement, and deploy virtual environments, enterprises are increasingly attaching blade servers to Fibre Channel SANs.
As the scale of Fibre Channel SAN blade switch deployment increases, it introduces some challenges for customers. Customers are looking for:

• The flexibility for server administrators to move, add, and change servers without involving the SAN administrator

Cisco continues to evolve its blade switch solution to meet these customer challenges with the introduction of Cisco ® N-Port Virtualizer (NPV) and Cisco FlexAttach.

• Transparent interoperability with any SAN core

Cisco NPV enables blade switches (and other edge switches) to act as host-bus-adapter (HBA) aggregators. Cisco NPV helps blade server customers deploy large-scale SANs and operate them with any vendor's SAN core, without the need to purchase any additional hardware or software. This feature is available in Cisco MDS 9000 SAN-OS Software Release 3.2(1a) and later.
When the Cisco blade switch is used in NPV mode, the blade switch is not seen as a switch by the SAN fabric. Instead, it acts as an HBA aggregator. Cisco NPV relies on the core switch to support and run an industry-standard feature called N-port ID virtualization (NPIV). As shown in Figure 1, the blade switch connects to servers using F-ports and uplinks to the SAN core using N-port proxy (NP) ports. The Cisco blade switch is VSAN aware. Traffic from all servers connected to a particular VSAN is uplinked to the core on NP-ports that carry that VSAN. Cisco NPV also offers significant configuration flexibility, with advanced traffic management capabilities. 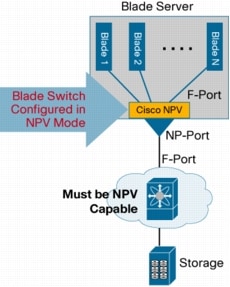 The Cisco Fibre Channel blade switch has advanced traffic management capabilities. Traffic from servers in the same VSAN are automatically load balanced across all uplink NP-ports carrying that VSAN. Servers are uniformly distributed using a round-robin approach. Customers also can specify the NP-port uplink used for each server; this option is available for customers who want to implement their own traffic engineering policies.
If an NP-port uplink failure occurs, all servers on the failed NP-port uplink are redistributed on the remaining available NP-ports. When the link is again available, the servers are automatically evenly redistributed, without manual intervention.

Cisco FlexAttach gives blade server customers the flexibility to add, move, or replace servers easily without the need to reconfigure SAN switches or storage arrays and without the need to purchase any additional hardware or software. This feature is available in Cisco MDS 9000 SAN-OS Software Release 3.3(1a) and later.
Cisco FlexAttach helps virtualize the SAN identity for a server, which enables a server to retain its SAN identity even if the server is moved or replaced within or across the blade server chassis. Cisco FlexAttach is also useful in prepositioning a server before it arrives. As can be seen in Figure 2, vitalizing the SAN identity helps avoid reconfiguration of SAN switches and storage arrays. Thus, server administrators can now add, move, or replace servers without having to coordinate every change with the SAN administrator. 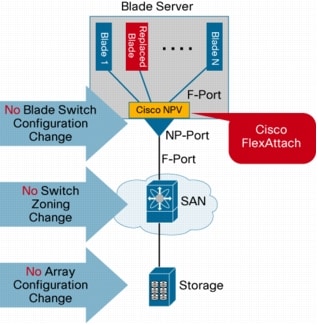 Cisco FlexAttach enables enterprises to more easily add, move, and replace blade servers, without the need to reconfigure the SAN switch and storage arrays. Cisco FlexAttach virtualizes the server SAN identity (the physical WWN) and presents a virtual identify (virtual WWN) for provisioning. When the physical server is changed, no reconfiguration of SAN switches or storage arrays is required, because the virtual identity remains the same, and the new physical address is automatically mapped to the virtual address. Servers can even be moved across blade server chassis.

When servers are added, moved, or changed, the server administrator often needs to wait for the SAN administrator to reconfigure the SAN switch or the storage array. Cisco FlexAttach eliminates the need for server and SAN administrators to coordinate server changes, thereby enabling more efficient operations.

Other Benefits of the Cisco Solution

VSAN, an industry standard for fabric virtualization, allows more efficient storage network use by consolidating multiple isolated physical SAN environments within a single physical SAN fabric or switch. It also helps enterprises reduce their capital investments. Up to 16 VSANs are supported per blade switch. Each VSAN supports role-based access control (RBAC) and has separate configuration and separate fabric services and operates as a separate SAN. Traffic in each VSAN is segregated. Individual blade servers or a group of blade servers can be on one VSAN, offering maximum flexibility and resiliency, and faults or outages in one VSAN do not affect other VSANs.

• RBAC on a per-VSAN basis

• Switch as an HBA, requiring minimal configuration and management