Use Case for Local Switching

The architecture of the SAN solution that is competitive with the Cisco ® SAN solution is a three-tier stack of common application-specific integrated circuits (ASICs); see Figure 1. This architecture has the advantages of being simple and quickly built. However, it also has serious limitations due to routing decisions that occur independently at each ASIC.

To fully understand local switching, you must understand the confines of the local switch. Local switching can be defined as the switching of traffic in a local domain. This domain may be an entire line card or, as in the case of competitive SAN solutions, only half of the ports of a line card (Figure 2). 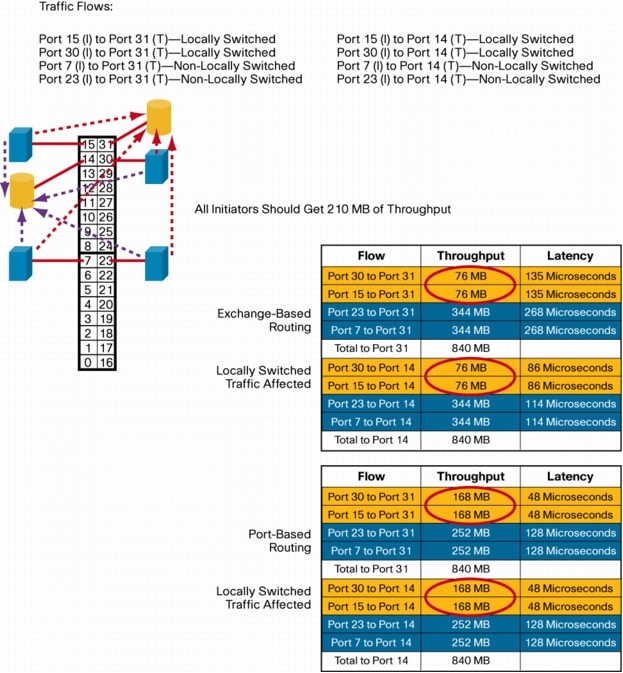 One potential benefit of local switching is greater port density with higher per-port speeds. This benefit is achieved by having some traffic locally switched and other traffic non-locally switched. As the test results previously described showed, this scenario is not possible with competitive SAN directors. Some traffic is given preferential bandwidth, while other traffic is negatively affected. Because of this behavior, traffic should not be mixed between locally switched and non-locally switched. Because of the performance problems, this behavior also means that use of local switching limits the number of ports deployable per line card.
Typical SAN deployments use fan-out ratios to determine the number of servers (initiators) per storage array (targets) ports. Storage vendors determine these fan-out ratios based on server type, application performance profile, and storage array port performance. These fan-out ratios vary, but typical ratios range from 8:1 (eight servers to one storage array port) to 20:1 or more. Using these values, Table 1 shows how the inability to mix locally switched and non-locally switched traffic leaves some ports unusable.

As can be seen in Table 1, the number of ports that cannot be deployed in local switched deployments can vary from as few as 2 ports (6 percent) of a 32-port line card to as many as 22 ports (46 percent) of a 48-port line card, depending on the initiator-to-target fan-out ratio. This limitation additionally affects the customer because this solution does not allow for network growth without extensive recabling of the entire competitive switch, ultimately limiting the number of deployable ports on the competitive SAN solution and requiring more chassis to be deployed.

Today's data center is increasingly using virtualization to reduce the number of servers being deployed and to increase the utilization of the deployed servers. This virtualization is typically deployed in clustered solutions, grouping 8, 16, 32, or more servers in a cluster. Application performance for the servers must be consistent and must not vary based on the server on which the virtual machine is running.
One requirement of the server clusters is that all servers have the same access to the same storage, meaning that a SAN administrator must ensure that all server ports and storage ports are in the same local switch domain. This requirement cannot be met on the competitive SAN solution due to the small size of the local switch domain (a maximum of 24 ports). In addition, as performance tests have shown, mixing traffic between local switch domains causes performance inconsistencies that are in direct conflict with the requirement for equal performance for all servers in a cluster.

Another consideration when looking at local switching is the fault domain of the solution. When initiators and targets are dispersed over multiple port groups and line cards, the failure of an ASIC or line card will affect only a small number of the devices in a cluster. When local switching is deployed, the failure of a single ASIC or line card will cause failure in an entire cluster of servers and storage devices.

Although local switching is a valid method for potentially increasing performance, the usability of such of feature is ultimately determined by a vendor's implementation. The competitive SAN local switch implementation imposes too many restrictions to be used successfully:

• The number of ports that can be deployed when using local switching is limited.

• The performance effect is unpredictable and cannot be designed around.

• Deployments of virtual servers and clusters are limited.

• High availability is compromised, and a single point of failure is created.