FlexPod is a best-practices data center architecture that includes the following components (Figure 1): 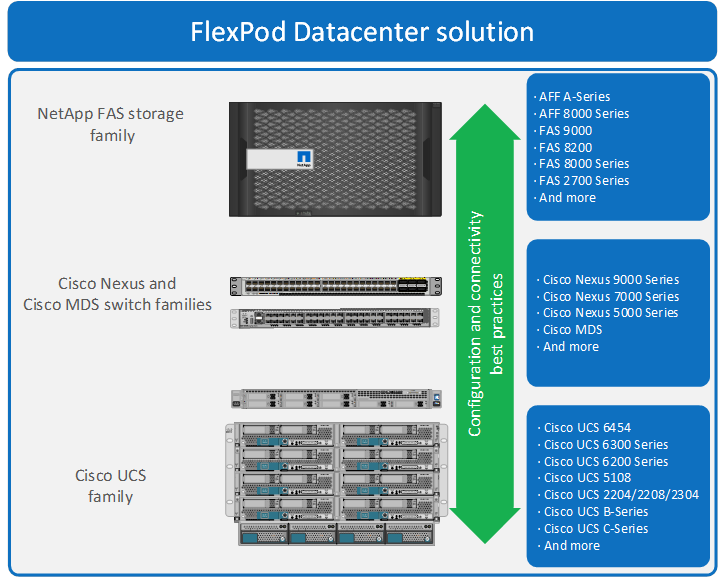 These components are connected and configured according to the best practices of both Cisco and NetApp to provide an excellent platform for running a variety of enterprise workloads with confidence. FlexPod can scale up for greater performance and capacity (adding computing, network, or storage resources individually as needed), or it can scale out for environments that require multiple consistent deployments (such as rolling out of additional FlexPod stacks). The reference architecture discussed in this document uses Cisco Nexus 9000 Series Switches for the network switching element.

One of the main benefits of FlexPod is its ability to maintain consistency with scale. Each of the component families shown in Figure 1 (Cisco UCS, Cisco Nexus, and NetApp AFF) offers platform and resource options to scale the infrastructure up or down, while supporting the same features and functions that are required under the configuration and connectivity best practices of FlexPod.

●     Application availability: Helps ensure that services are accessible and ready to use

FlexPod with NX-OS is designed to be fully redundant in the computing, network, and storage layers. There is no single point of failure from a device or traffic path perspective. Figure 2 shows the connection of the various elements of the latest FlexPod design used in this validation of FC-NVMe. 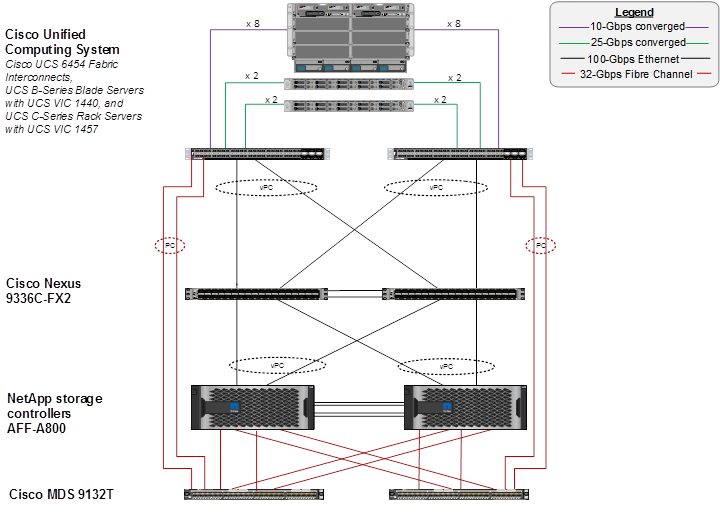 The connectivity between the Cisco MDS switches and the NetApp AFF A800 storage cluster is also 32-Gbps Fibre Channel.

The connectivity between the Cisco Nexus switches and the latest-generation NetApp AFF A800 storage cluster is also 100 Gbps with port channels on the storage controllers and vPCs on the switches. The NetApp AFF A800 storage controllers are equipped with Non-Volatile Memory Express (NVMe) disks on the higher-speed Peripheral Connect Interface Express (PCIe) bus.

The NVMe data storage standard is emerging as a core technology. NVMe is transforming enterprise data storage access and transport by delivering very high bandwidth and very low latency storage access for current and future memory technologies. NVMe replaces the SCSI command set with the NVMe command set. It relies on PCIe, a high-speed and high-bandwidth hardware protocol that is substantially faster than older standards like SCSI, SAS, and SATA.

NVMe was designed to work with nonvolatile flash drives, multicore CPUs, and gigabytes of memory. It also takes advantage of the significant advances in computer science since the 1970s, enabling streamlined command sets that more efficiently parse and manipulate data.

An end-to-end NVMe architecture also enables data center administrators to rethink the extent to which they can push their virtualized and containerized environments and the amount of scalability that their transaction-oriented databases can support. It seamlessly extends a customer’s existing SAN infrastructure for real-time applications while simultaneously delivering improved IOPS and throughput with reduced latency.

NVMe reduces the cost of IT by efficiently using all resources throughout the stack. An NVMe over Fibre Channel solution is lossless and can handle the scalability requirements of next-generation applications. These new technologies include artificial intelligence, machine learning, deep learning, real-time analytics, and other mission-critical applications.

FlexPod is the ideal platform for introducing FC-NVMe. It can be supported with the addition of the Cisco UCS VIC 1400 series in existing Cisco UCS B200 M5 servers and simple, nondisruptive software upgrades to the Cisco UCS system, the Cisco MDS 32-Gbps switches, and the NetApp AFF storage arrays. Once the supported hardware and software are in place, the configuration of FC-NVMe is similar to FCP configuration (details to follow).

NVMe is causing an architectural shift that makes communication with storage systems massively parallel. The result is greater bandwidth and lower-latency connectivity between servers and storage devices.

Many other factors enable the NetApp implementation of NVMe to provide exceptional performance in the data center, including the following:

The following features and limitations characterize the ONTAP implementation of FC-NVMe:

●     NVMe/FC relies on the ANA protocol to provide multipathing and path management necessary for both path and target failover. The ANA protocol defines how the NVMe subsystem communicates path and subsystem errors back to the host so that the host can manage paths and failover from one path to another. ANA fills the same role in NVMe/FC that ALUA does for both FCP and iSCSI protocols. ANA with host OS path management such as NVME-Multipath or DM-Multipath provide path management and failover capabilities for NVMe/FC. SUSE Linux Enterprise Server (SLES) 15 features Asymmetric namespace access (ANA) support with ONTAP 9.6.

●     The SLES 15 initiator host can serve both FC-NVMe and Fibre Channel over SCSI (FC-SCSI) traffic through the same 32-Gbps Fibre Channel adapter ports. Indeed, this is expected to be the most commonly deployed host configuration for end users. For FCP (FC-SCSI), you can configure dm-multipath as usual for the SCSI logical unit numbers (LUNs), or logical devices, resulting in multipath devices, whereas NVME multipath is used to configure FC-NVME multipath namespace devices (i.e /dev/nvmeXnY) on the SLES15 initiator host.

Cisco UCS provides a unified fabric that is an architectural approach delivering flexibility, scalability, intelligence and simplicity.  This flexibility allows Cisco UCS to readily support new technologies such as FC-NVMe seamlessly. In Cisco UCS software release 4.0(2), support for FC-NVMe, which defines a mapping protocol for applying the NVMe interface to Fibre Channel was introduced. This release adds support for the FC NVME Initiator adapter policy on UCS 6300 Series Fabric Interconnects and UCS 6454 Fabric Interconnects. Cisco UCS software release 4.0(4) is used for validating and finding the performance characteristics in this paper.

Cisco UCS Software Release 4.0(4), along with the Cisco UCS VIC 1400 platform adapters and the Release 2.0.0.42-77.0 Fibre Channel network interface card (fnic) driver, supports FC-NVMe. In a Cisco UCS service profile, both standard Fibre Channel and FC-NVMe vHBAs can be created. The type of vHBA is selected in the Fibre Channel adapter policy, as shown in Figure 3.

Both Fibre Channel and FC-NVMe vHBAs can exist in a Cisco UCS service profile on a single server. In the lab validation for this document, four vHBAs (one FC-NVME initiator on each Fibre Channel fabric and one Fibre Channel initiator on each Fibre Channel fabric) were created in each service profile to facilitate performance comparisons between the two protocols. Each vHBA, regardless of type, was automatically assigned a worldwide node name (WWNN) and a worldwide port name (WWPN). The Cisco UCS fabric interconnects were in Fibre Channel end-host mode (NPV mode) and uplinked through a SAN port channel to the Cisco MDS 9132T switches in NPV mode. Zoning in the Cisco MDS 9132T switches connected the vHBAs to storage targets for both FC-NVMe and Fibre Channel. Single-initiator, multiple-target zones were used for both FCP and FC-NVMe. The connectivity to the NVMe subsystems on storage is configured in both the storage and the host operating system.

SLES 15 was installed with all packages selected in the Base System, Base development and Linux Kernel development under the software section during the OS installation. Alternately, you may install the requisite packages using the zipper utility post the SLES15 OS install, after ensuring you have mounted the installer-1 and Packages-1 ISOs using the Virtual Media Wizard on your server.

In SLES 15, NVMe multipath is enabled by default, and is the recommended NVMe in-kernel multipath config for enabling ANA.

You may verify this by running:

# cat /usr/lib/udev/rules.d/71-nvme-iopolicy-netapp-ONTAP.rules
# Enable round-robin for NetApp ONTAP
ACTION=="add", SUBSYSTEM=="nvme-subsystem", ATTR{model}=="NetApp ONTAP Controller", ATTR{iopolicy}="round-robin"
You can verify that the round-robin loadbalancer by checking the corresponding sysfs value, provided of course you have ONTAP NVMe namespaces mapped and discovered on the host. For e.g.
# cat /sys/class/nvme-subsystem/nvme-subsys0/iopolicy
round-robin

NetApp plug-in for ONTAP devices - The existing NetApp plug-in has now been modified to handle ONTAP namespaces as well. It now provides 3 different display options for reporting NVMe specific ONTAP details - column, json & raw (which is the default) as shown in the below example:

The SLES 15 installer does not contain drivers for the Cisco VIC FNIC. Because of this, Fibre Channel SAN boot was not supported and SLES 15 had to be installed on local storage on the servers. In this lab validation, SLES 15 was installed on 32-GB Cisco FlexFlash mirrored Secure Digital (SD) drives on each server. Also, all the vHBAs (both Fibre Channel and FC-NVMe) had to be disabled in the service profile so that SLES could be installed. After SLES and the Release 2.0.0.42-77.0 fnic driver were installed, the vHBAs could be brought online. It was also discovered in this validation that the FC-NVMe vHBAs must come before the Fibre Channel vHBAs in the Cisco UCS service profile PCI device ordering.

The nvme command was used to connect to the NVMe subsystems provisioned on the NetApp storage.

The following capabilities were demonstrated in this validation:

●     The ability to read data from and write data to a connected FC-NVMe device.

●     The ability to simultaneously connect to both Fibre Channel and FC-NVMe targets.

●     The ability to simultaneously connect to more than one FC-NVMe target device using a single FC-NVMe vHBA.

This section provides a high-level summary of the FC-NVMe on FlexPod validation testing. The solution was validated for basic data forwarding by deploying the Vdbench tool on each SLES host. The system was verified to successfully pass FC-NVMe traffic, and performance comparisons were made between FC-NVMe and FCP with various data block sizes and numbers of Vdbench threads.

Table 1 lists the hardware and software versions used during the solution validation process. Note that Cisco and NetApp have interoperability matrixes that should be referenced to determine support for any specific implementation of FlexPod. See the following documents for more information:

The FlexPod implementation used in this validation is based on FlexPod Datacenter with VMware vSphere 6.7 U1, Cisco UCS 4th Generation, and NetApp AFF A-Series with modifications for SLES 15 with FC-NVMe.

Testing consisted of running the Vdbench tool to compare FCP performance and FC-NVMe performance. Because FC-NVMe is a more streamlined protocol with much greater queuing capabilities, it should outperform FCP with Fibre Channel and SCSI, especially in situations with more I/O operations per second (IOPS; that is, more transactions) and parallel activities.

For 4 KB Block size and 100% random reads, the following results were seen: 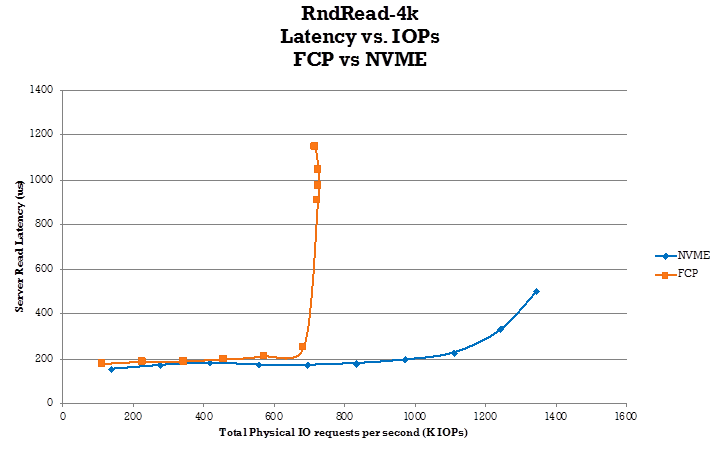 For 8 KB  block size and 100% random reads, the following results were seen: For a VDBench simulated Oracle workload at 80% Random Reads and 20% Writes the following results were seen: 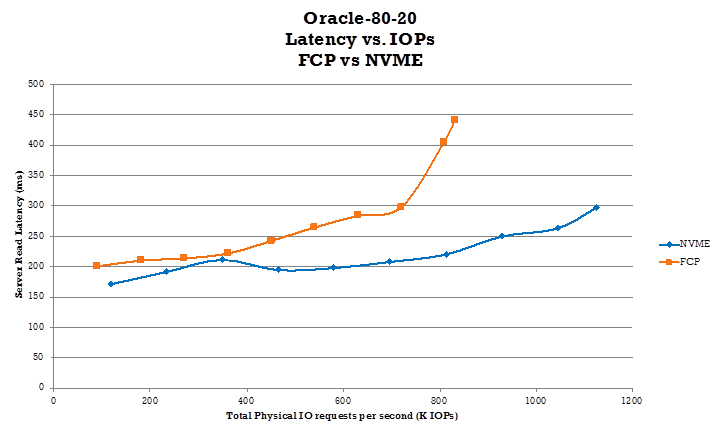 With respect to SLES 15 host CPU utilization, the following results were seen:

FlexPod Datacenter is the optimal shared infrastructure foundation for deploying FC-NVMe to allow high-performance storage access to applications that need it. As FC-NVMe evolves to include high availability, multipathing, and additional operating system support, FlexPod is well suited as the platform of choice, providing the scalability and reliability needed to support these capabilities.

With FlexPod, Cisco and NetApp have created a platform that is both flexible and scalable for multiple use cases and applications. With FC-NVMe, FlexPod adds another feature to help organizations efficiently and effectively support business-critical applications running simultaneously from the same shared infrastructure. The flexibility and scalability of FlexPod also enables customers to start with a right-sized infrastructure that can grow with and adapt to their evolving business requirements.

Consult the following references for additional information about the topics discussed in this document.