The Cisco IOS® Intrusion Prevention System (IPS) helps protect your network from attacks by inspecting traffic passing in both directions through any combination of router LAN and WAN interfaces.

In today’s business environment, network intruders and attackers can come from outside or inside the network. They can launch distributed denial-of-service attacks, they can attack Internet connections, and they can exploit network and host vulnerabilities. At the same time, Internet worms and viruses can spread across the world in a matter of minutes. There is often no time to wait for human intervention - the network itself must possess the intelligence to recognize and mitigate these attacks, threats, exploits, worms, and viruses.

The Cisco IOS Intrusion Prevention System (IPS) is an inline, deep-packet inspection-based solution that helps Cisco IOS Software effectively mitigate a wide range of network attacks. Although it is common practice to defend against attacks by inspecting traffic at data centers and corporate headquarters, distributing the network-level defense to stop malicious traffic close to its entry point at branch or telecommuter offices is also critical.

Major Use Cases and Benefits 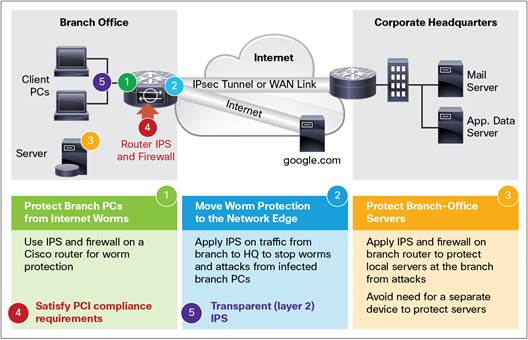 ●   Works with the Cisco IOS Firewall, control-plane policing, and other Cisco IOS Software security features to protect the router and networks behind the router

Cisco IOS IPS is available in certain software feature sets on the 87x routers; the Integrated Services Routers; the SR 520 Secure Router; and the 720x and 7301 routers listed in Table 2. Starting with IOS 15.0(1)M, the IOS IPS is also supported on the 88x and 89x routers and the next-generation ISR with an optional license that supports the use of that and other features when installed, as shown in Table 3.

In Cisco IOS Software Release 12.4(11)T and later T-train releases, IOS IPS signature provisioning is accomplished through the selection of one of two signature categories: Basic or Advanced. Users may also add or remove individual signatures and can tune signature parameters using Cisco Configuration Professional or Cisco Security Manager or the command-line interface (CLI), which allows easy scripting to manage signature configuration for a large number of routers.

Those signature update packages incorporate all previous Cisco IPS signature updates and can be downloaded to the router from a local PC or server using the router CLI, Cisco Configuration Professional, or Cisco Security Manager.

Starting with IOS 15.0(1)M1, a valid IOS IPS Signature Subscription license is required to be installed on 88x, 89x, 19xx, 29xx, and 39xx routers to load signature packages. To obtain and install this license, you need to purchase the Cisco Services for IPS contract relevant to the router model as well as the type and level of the desired Cisco Smart Net Total Care deliverables.

For more information about Cisco Services for IPS, visit: http://www.cisco.com/web/services/portfolio/product-technical-support/intrusion-prevention-ips/index.html.

Cisco IOS IPS uses signature microengines (SMEs) to load (into the router’s memory) and scan for a set of attack signatures. Each engine is customized for inspecting a Layer 4 or 7 protocol and its fields and arguments. Within each packet carrying data for that protocol, it looks for a set of legal parameters that have allowable ranges or sets of values. It also scans for malicious activity specific to that protocol using a parallel signature-scanning technique to scan for multiple patterns within an SME at any given time.

Cisco IOS IPS can protect your network from more than 3700 different attacks, exploits, worms, and viruses. Attacks that can be detected and stopped by Cisco IOS IPS include many Microsoft Windows OS and application vulnerability exploits, viruses, and worms.

Each individual signature or category of signatures selected to scan traffic for matching attacks can be configured to take any combination of the following five actions when triggered:

3.     Send TCP-reset packets to both ends of the connection to terminate the session

4.     Deny all packets from the attacker (source address) temporarily

The router CLI or Cisco Configuration Professional version 1.1 or later can be used for the configuration of IOS IPS as well as the precise provisioning and tuning of IPS signatures on a single router running Cisco IOS Release 12.4(11)T2 or later. In addition, Cisco Security Manager version 3.2 or later may be used to manage IPS policies and signature sets on multiple routers running Cisco IOS Software Release 12.4(11)T2 or later. Use of IOS IPS in IOS releases prior to 12.4(11)T or in IOS Mainline releases is not recommended.

Financing to Help You Achieve Your Objectives

Cisco Capital can help you acquire the technology you need to achieve your objectives and stay competitive. We can help you reduce CapEx. Accelerate your growth. Optimize your investment dollars and ROI. Cisco Capital financing gives you flexibility in acquiring hardware, software, services, and complementary third-party equipment. And there’s just one predictable payment. Cisco Capital is available in more than 100 countries. Learn more.