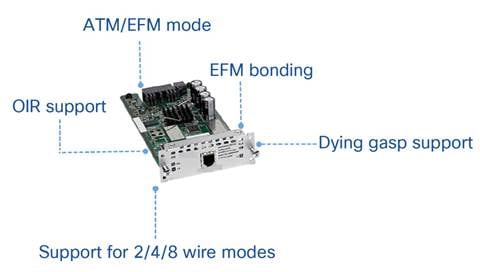 In EFM mode, the multimode G.SHDSL NIM allows bonding, as defined by IEEE 802.3ah, and is typically used in scenarios where individual links are aggregated using the 802.3ah loop aggregation. Depending on the number of wire pairs in service, the maximum data rate is 61.4 Mbps, with each line supporting up to 15 Mbps with 128-TCPAM. The NIM complies with the 2BASE-TL standard, which is based on the IEEE 802.3ah EFM standard. The 2BASE-TL standard uses the technology standard defined in ITU recommendation G.991.2 (G.SHDSL.).

The multimode four-pair G.SHDSL NIM, together with the ISR 4000 series router, provides businesses the necessary bandwidth for critical traffic such as voice and videoconferencing and enables customers to save money by integrating voice and data traffic on the same WAN link. Service providers can increase subscriber revenue by bundling services and offering differentiated service levels through Service-Level Agreements (SLAs).

●   Complies with standard, based on ITU recommendation G.991.2

●   Supports G.SHDSL Annexes A (U.S. signaling) and B (European signaling)

●   Supports ATM or EFM modes (one mode at a time)

●   The system requires no additional flash or DRAM memory beyond the specified minimum for the previously mentioned Cisco IOS releases.

●   The multimode four-pair G.SHDSL NIMs can be inserted into any NIM slot in any ISR 4000 router.

Cisco ISR 4000 routers with the multimode G.SHDSL EFM NIMs can be optimized for Internet security with Cisco IOS Firewall supporting stateful inspection firewall and intrusion prevention system features. These platforms can also be optimized for VPNs to allow for secure use of the Internet for communications with the same policies and levels of security and performance as a private network. VPNs provide security through encryption tunneling, and the Cisco routers support hardware-based Triple Data Encryption Standard (3DES) IP Security (IPsec), Advanced Encryption Standard (AES), and SSL VPN. Encryption features can be enabled on the routers with the Advanced Security or any later feature set of the Cisco IOS XE Software. Further, Cisco ISR 4000 Web Security with the Cisco Umbrella™ solution enables branch offices to intelligently redirect web traffic to the cloud to enforce granular security and control policy over dynamic content, protecting branch-office users from threats such as Trojan horses, back doors, rogue scanners, viruses, and worms.

Such an integrated solution rapidly enables service deployment, increases efficiency of network operations, and provides opportunities to protect, grow, and optimize your business.

Table 1 lists the features of the G.SHDSL NIM.

Table 2 gives data rates for the four-pair G.SHDSL NIM in the two modes (EFM and ATM).

Note: Actual data rates depend upon factors such as loop length, line conditions, DSLAM line card and chipset, and data rates provisioned by the service provider.

The multimode G.SHDSL NIM is based on the Lantiq chipset, and it operates when connected to a Digital Subscriber Line Access Multiplexer (DSLAM). Table 3 lists the DSLAMs that have been tested and are supported for interoperability. This table will be updated as more DSLAMs, line cards, and firmware versions are tested and supported in the future. For more information and details about DSLAM and NIM interoperability, please refer to Cisco ISR4000 xDSL Interoperability.

Table 4 gives platform support details for the multimode G.SHDSL NIMs, and Table 5 shows the number of NIMs supported per router.

The G.SHDSL features are supported with the IP Base technology package license for the Cisco 4300 and 4400 Series Integrated Services Routers.

When installed in a Cisco ISR 4000 router, the multimode four-pair G.SHDSL NIM (NIM-4SHDSL-EA) does not change the standards (safety, EMC, telecom, network homologation, power, environmental requirements, and regulatory approvals) of the router itself. Refer to the Cisco 4000 Series Integrated Services Routers platform-specific links for regulatory compliance, safety, EMC, and telecom standards at https://www.cisco.com/go/isr4000.

Financing to help you achieve your objectives

Cisco Capital can help you acquire the technology you need to achieve your objectives and stay competitive. We can help you reduce CapEx. Accelerate your growth. Optimize your investment dollars and ROI. Cisco Capital financing gives you flexibility in acquiring hardware, software, services, and complementary third-party equipment. And there’s just one predictable payment. Cisco Capital is available in more than 100 countries. Learn more.