This chapter describes the Override Control feature and provides detailed information on the following topics:

Override Control (OC) feature allows the customer to dynamically modify the parameters of static or predefined rules with parameters sent by PCRF over the Gx interface.

The Inheritance feature does not support overwriting parameters at rule/charging action level, and exclusion of more than one rule. In order to provide this flexibility and also have a generic capability on chassis, Override Control feature is introduced. This feature will define a set of custom AVPs that will enable the PCRF to override charging and policy parameters for all rules (wildcard) or a specified set of rules or charging actions.

The override values should be sent by PCRF over Gx using the custom AVPs. Override Control provides this capability while addressing the limitations with Inheritance feature like rule level control, charging action level control, exclusion of more than one rule, different override values to be specified for a subscriber, etc. So, the Override Control feature will replace the Inheritance feature.

When multiple overrides are received from PCRF, the following is the priority in which they are applied:

When installing a predef rule, if override control is received for that predef rule and QCI/ARP is overridden, then the new overridden QCI/ARP values are used for bearer binding of the predef rule. If the QCI/ARP is not overridden, then the values configured in charging action is used. The override charging and policy parameters received from PCRF will continue to apply for the entire duration of the call. These values may be modified by PCRF by sending the modified values with the same override control criteria (Rule name(s), Charging Action Name(s) and Exclude Rule(s)). Any change in the Override Control criteria will be interrupted as a new OC. There can only be one wildcard OC installed for a subscriber.

In 20 and later releases, the status of Override Control can be checked based on whether OC is enabled or disabled for the call. This is useful to trace calls for which Override Control is not installed and can also be used for debugging purposes. The OC status will be displayed based on the following conditions:

In this release, an addional capability is added to the Override Control feature to dynamically route/mark traffic on a per subscriber basis. Override Control functionality will now support the policy parameters in charging action for post processing rules — Nexthop Address (IPv4 address only) and TOS. Diameter AVPs are also added in support of this feature.

The following are limitations for this feature:

For information on how to configure the Override Control feature, refer to the section Configuring Override Control Feature in the Enhanced Charging Service Configuration chapter of this guide.

For identification of OC, PCRF uses one or a combination of the following key parameters:

There is no unique identifier available for identification of OC for a particular subscriber session. In release 20, a new Diameter AVP "Override-Control-Name" is defined in the Override-Control grouped AVP. The OC name specified in the AVP is used as the unique key to identify OC for any further updates like OC modification or deletion.

To meet the new AVP requirement, "with-oc-name " keyword has been added to the existing override-control CLI command under rulebase configuration. If the override-control with-oc-name CLI is configured in rulebase, only OCs with Override-Control-Name AVP are supported and the OCs without name are rejected.

During rulebase change, the feature to support OC name will be controlled based on the configuration of new rulebase. After rulebase change OC will be accepted as per the CLI configured in new rulebase. This is the only scenario where for a single call session, OC can be installed with both OC name and without OC name.

When software upgrade is done on a standby setup where same rulebase is configured with the CLI override-control with-oc-name , then no calls are dropped and OC installation status will remain the same as before upgrade. If new call is established after upgrade and OC is installed with OC-name then this will be applied on new call.

During the downgrade, OC-name will be dropped and OCs will be recreated assuming Rule/CA/Exclude rule name list as the primary key for unique identification.

The current design allows adding Exclude Rules to a wildcard or CA level OC. In releases prior to 20, whenever a wildcard level override or CA level override is sent after another wildcard or CA override, the two wildcards or CAs were not merged. The gateway considers only the latest override at wildcard level or CA level to be applied for OC. In release 20 and beyond, the two wildcards or the two CAs received will be merged including the Exclude Rule lists defined within. Through this change, all the rules in the Exclude Rule lists under both overrides will be excluded from being applied in OC.

The current implementation of OC does not allow disabling an already enabled/configured OC or reverting few parameters of a previously installed OC. It can only be modified but cannot be completely disabled. In release 20, operator is provided with the flexibility to disable an installed OC or overridden parameters associated with the installed OC.

Disabling OC is supported through the use of a new Diameter AVP "Disable-Override-Control". This AVP indicates that override parameters for the subscriber will be removed completely or per parameter basis. This is a grouped AVP containing the following sub-attributes:

Checkpointing of Disable OC to standby chassis does not occur. So, if session manager goes down before the Disable OC request has been processed, OC will not be disabled.

With the previous implementation of Override-Control feature, wildcard is not supported in these existing AVPs. If PCRF want to exclude 100 rules, then including 100 Override-Charging-Action-Exclude-Rule AVPs in CCA message will impact the efficiency and capacity. To address this problem, the Override-Control AVP wildcard support feature is introduced.

In 21.3 and later releases, the support for Execution-Time AVP allows the overridden parameters to be specified for a rule (static or predefined), for one or all charging actions (using a wildcard), with the ability to exclude certain rules. These overrides are sent by the PCRF using the AVP construct in a CCA or RAR message.

As part of this feature, the P-GW supports the following two new AVPs within the proprietary Override-Control grouped AVP:

Both the AVPs are included in the Override-Charging-Action-Parameters grouped AVP.

The Execution-Time AVP is an optional AVP in the Override-Control grouped AVP, sent in RAR/CCA message by the PCRF. It is valid for Rule-level, Charging-action level, and Wildcard-level OC.

Whenever Override-Control AVP is sent in RAR/CCA message from PCRF, and:

The Pending OCs are recovered on intra/inter chassis session recovery. The PCEF checkpoints Execution-Time using the existing framework that is used for check-pointing of other OC parameters. When the Session Manager restarts or ICSR switchover occurs, timer is started for each of the recovered OC with Execution-Time AVP. The value of this new timer is equal to the time left for the OC to be activated or applied on the call.

If the timer expires during the recovery, then the OC is applied immediately after the recovery.

During downgrade from N to N-1 build, the pending OCs on currently active N chassis are not check-pointed to the standby N-1 chassis.

The PCEF decides whether to flush or retain already pending OCs for a subscriber, based on the presence or absence of the Override-Control-Pending-Queue-Action AVP.

On receiving a new OC (with or without Execution-Time AVP) in a new RAR/CCA message, the PCEF flushes all the previous pending OCs for that subscriber. The PCEF either buffers or applies the newly received OC, based on the presence or absence of the Execution-Time AVP respectively. This behavior is the default behavior.

When the requirement is that the Pending OCs should not be flushed, the new AVP, Override-Control-Pending-Queue-Action, is sent within at least one of the Override-Control AVPs in the RAR/CCA message, as shown in the following figure.

Adding OC in the Pending Queue

The Override-Control grouped AVP received without the Execution-Time AVP, or with Execution-Time already in “Past”, is not added in the list; in other words, it is applied immediately.

The following figure describes the adding of OC in Pending Queue. 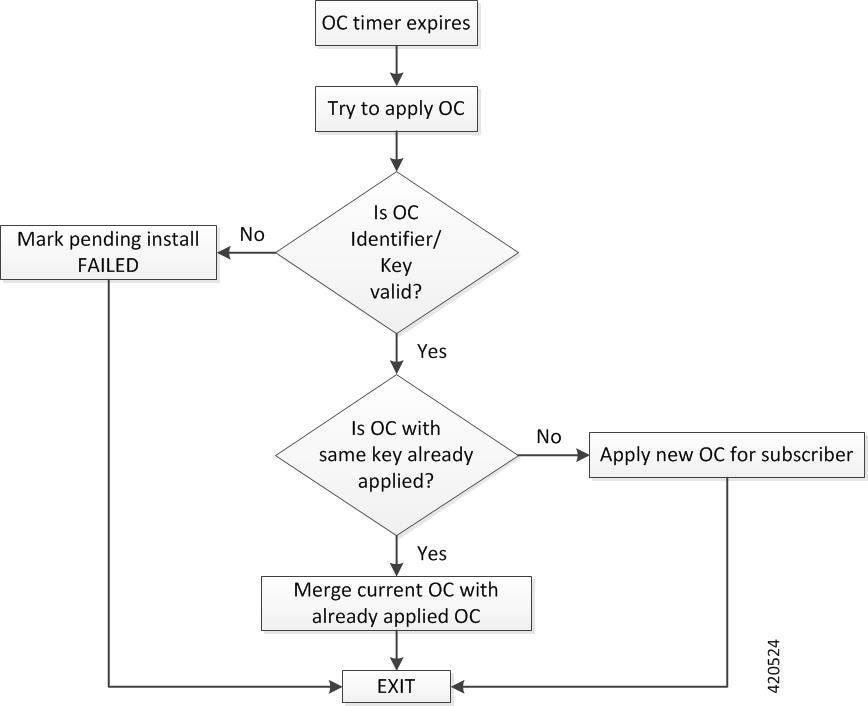 Following are the known limitations and restrictions of the Support for Execution-Time AVP feature:

This section describes how to configure the Override Control feature to override charging and policy parameters for all rules (wildcard) or a specified set of rules or charging actions.

Use the following configuration to configure the Override Control feature at rulebase level:

For more information on this command, see the Command Line Interface Reference.

To verify your configuration, in the Exec Mode, enter the following command:

To verify the Override Control status, in the Exec Mode, enter the following command. The status displays ON when OC is installed and OFF when OC is removed.

This section provides information on the show commands available to support this feature.

The output of this CLI command has been modified to show information related to pending OCs at rulebase-level. Following is a partial sample output:

The following fields are newly added to the output of this show command:

The output of this show command is changed to indicate how many Overrides were received and how many are currently active for the subscriber. The following fields are new in this release:

As part of Support for Execution-Time AVP feature, the output of this CLI command has been further modified to show information related to pending OCs at subscriber-level. Following is a partial sample output:

This command is added to display the override being applied for the subscriber.

As part of the Support for Execution-Time AVP feature, this new show command has been introduced to check the pending OCs at subscriber-level. Following is a sample output: