Both Cisco TelePresence and Cisco Unified Communications solutions have expanded dramatically with internal development and strategic acquisitions by Cisco.

With the acquisition of WebEx in 2007, Cisco added more Unified Communications products to its portfolio, including a new video soft client. Finally, in 2009 Cisco acquired Tandberg. At the time of the acquisition Tandberg was the number-one videoconferencing vendor in the market, with the most comprehensive product line in the industry. Combining Cisco TelePresence with the Tandberg portfolio instantly gave Cisco the best-of-breed TelePresence products from the desktop to the boardroom. Figure 2-1 illustrates the progression of interactive video within Cisco's product portfolio. 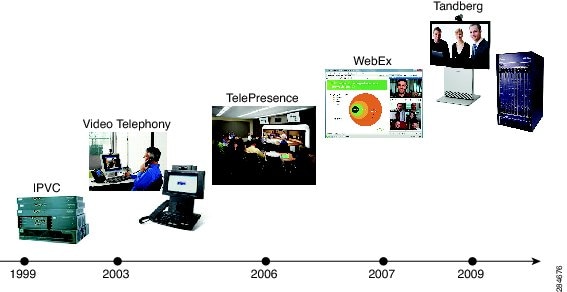 All interactive video architectures consist of five categories, as shown in Figure 2-2:

Each category contains devices that provide a specific function for the video deployment, but devices from all categories are not required or present in all video deployments. 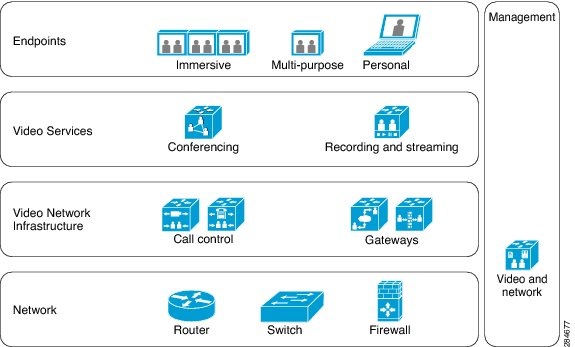 An endpoint consists of a screen, microphone, speakers, and one or more video and audio processing devices called codecs. These components are usually combined into a single unit that can range from a phone with a screen (at the basic end), to a large TV-like device, to an immersive multi-screen system with integrated tables and seating. Cisco provides a large number of video endpoints ranging from video-enabled tablets to multi-screen immersive endpoints.

Different types of video endpoints provide different user experiences and in many cases different feature sets. Each video endpoint supports multiple resolutions, but not all video endpoints support the same set of resolutions. For example, a multi-screen immersive endpoint might support high definition resolutions up to 1080p at 30 frames per second (fps) while a video-enabled tablet might support high definition resolutions up to only 720p at 30 fps. All video endpoints have a core set of features that usually consist of the ability to send and receive live audio and video, and send and receive shared content. Depending on the endpoint type, advanced features such as integrated conferencing or the ability to support additional video and audio sources may be available.

It is important to remember that higher resolutions consumes more network bandwidth. In most deployments, customers choose to limit the higher resolutions based on the endpoint type or user type. Video deployments always start with the type of video endpoints being deployed and the resolutions being supported. It is not uncommon to see customers create multiple classes of video that directly correlate with the supported resolution or user type. Classes are often based on a minimum level of service provided to each endpoint type or user type, and the classes may contain different maximum resolutions for the same type of endpoint depending on the user. Figure 2-3 shows an example of possible video classes deployed in an enterprise. Switching forwards incoming audio and video without manipulating the video media itself. Switching platforms essentially switch video from one endpoint to another and require all video endpoints in a meeting to send and receive the same resolution. Switching devices offer a cost-effective and scalable solution for video deployments supporting video endpoints with the same resolution sets and not requiring advanced video features such as continuous or active presence.

Transcoding is the encoding and decoding of video media streams between endpoints. Transcoding devices offer support for video endpoints participating in the same meeting with different resolutions, continuous or active presence, and other advanced conferencing features. They allow for maximum conferencing flexibility and feature sets.

Streaming and recording devices provide the ability to record, replay, and stream important meetings, messages, or updates. Meetings can also be streamed to allow a large number of users to participate in a meeting as view-only participants. Cisco offers one recording and streaming server for TelePresence and Unified Communications video endpoints, and one recording-only server for TelePresence endpoints only, as follows:

The Cisco TCS is available as an appliance or a blade for the Cisco TelePresence Media Services Engine (MSE) chassis. Cisco TCS provides live recording, streaming, and playback of video meetings with content from any TelePresence or Unified Communications video endpoint. Live streams and recordings can be viewed with standard QuickTime, RealPlayer, and Windows Media Players.

The CTRS is a server-based platform that provides studio mode and event recording and playback for Cisco TelePresence System 3x10, 1300, 1100, and 500 endpoints. Recordings can be viewed in native 1080p or 720p resolution from any Cisco TelePresence System 3x10, 1300, 1100, and 500 endpoints. or with QuickTime, RealPlayer or Windows Media Player in CIF format.

Cisco VCS was designed to provide call control for H.323 and Session Initiation Protocol (SIP) video environments with advanced video features to support large-scale deployments. VCS can be deployed in either of the following ways:

Each call control platform can be deployed independently or as an integrated solution for existing and new customers. Unified CM supports direct registration for all Unified Communications video endpoints and most TelePresence endpoints, while VCS supports most TelePresence endpoints but does not support Unified Communications endpoints. Table 2-2 lists the call control support for each video endpoint type or series.

Video gateways provide access from one network to another. Cisco provides the following video gateways:

The Cisco IME is a server-based platform that provides business-to-business connectivity when used in conjunction with the Cisco ASA 5500 Series Adaptive Security Appliances and Cisco Unified CM 8.x or later releases.

Video management platforms perform multiple functions such as scheduling, video endpoint and infrastructure monitoring, and in some cases provisioning or tracing of media flows across the network. Cisco provides three main management platforms for TelePresence and Unified Communications video:

The Cisco TelePresence Management Suite (TMS) is delivered as a management appliance or software that can be loaded on a server. Cisco TMS provides one-button-to-push (OBTP) call launching, scheduling, monitoring, and provisioning for TelePresence endpoints registered with the VCS. The TMS also provides OBTP, scheduling, and statistics for TelePresence endpoints registered to Unified CM. TMS also extends scheduling and some monitoring features to third-party telepresence and video endpoints such as Polycom and LifeSize.

Cisco Prime Collaboration Manager is a server-based network management platform that allows real-time monitoring and analysis of medial flows from Cisco Medianet-enabled devices. Cisco Medianet devices are routers and switches that support Cisco Mediatrace, which maps the path media takes through the network and which can be used only with endpoints that contain the Cisco Media Services Interface (MSI). The MSI is a software component that is embedded in video endpoints and collaboration applications, and it provides advanced features such as auto-configuration of network ports and initiation of Mediatrace. Cisco Prime Collaboration Manager also supplies historical reporting and a view of utilization and problem trends as well as critical outages.

A properly designed network is a key component of any video design. Using existing network protocols, features, and tools simplifies video deployments and helps ensure a successful deployment. Interactive video devices are sensitive to loss, so it is imperative to keep loss to a minimum. Identifying video traffic on the network and ensuring end-to-end Quality of Service (QoS) provides the most predictable video experience.

With the use of protocols such as Cisco Discovery Protocol (CDP), which is a Cisco proprietary Data Link Layer protocol used to share information between network devices, video endpoints can be identified automatically, thus allowing their QoS markings to be trusted, traffic to be placed in the appropriate Virtual Local Area Network (VLAN), and packets to be queued appropriately. Additionally, VLANs can be used to insulate video traffic from other network traffic and to provide additional security.

Video-aware networks allow for real-time traffic analysis for troubleshooting network issues in real time. Tracking video flows through the network and identifying the exact point in the network where loss is occurring is essential in today's networks where video flows between two endpoints can take different paths across the network, depending on network conditions. Using Cisco Medianet-enabled devices not only allows for real-time traffic analysis but also provides utilization data that helps avoid network oversubscription.