This chapter contains the following information about the Cisco SIP IP phone:

What is Session Initiation Protocol?

The Cisco SIP IP Phone with a Catalyst Switch

What is Session Initiation Protocol?

SIP is the Internet Engineering Task Force's (IETF's) standard for multimedia conferencing over IP. SIP is an ASCII-based, application-layer control protocol (defined in RFC 2543) that can be used to establish, maintain, and terminate calls between two or more end points.

Like other VoIP protocols, SIP is designed to address the functions of signaling, device control, and session management within a packet telephony network. Signaling allows call information to be carried across network boundaries. Device control allows an intelligent entity to control a device with limited intelligence. Session management provides the ability to control the attributes of an end-to-end call.

SIP provides the capabilities to:

The conferences can consist of two or more users and can be established using multicast or multiple unicast sessions.

The term conference means an established session (or call) between two or more end points. In this document, the terms conference and call are used interchangeably.

SIP is a peer-to-peer protocol. The peers in the sessions are called User Agents (UAs). These user agents can be grouped into two categories:

User agent server (UAS)—A server application that contacts the user when a SIP request is received and that returns a response on behalf of the user.

Often a SIP end point will act as both a UAC and a UAS, one for sending requests the other for receiving. 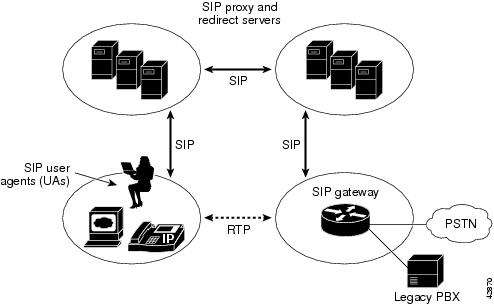 Phones—Can act as either a UAS or UAC. Softphones (PCs that have phone capabilities installed) and Cisco SIP IP phones can initiate SIP requests and respond to requests.

Gateways—Provide call control. Gateways provide many services, the most common being a translation function between SIP conferencing endpoints and other terminal types. This function includes translation between transmission formats and between communications procedures. In addition, the gateway also translates between audio and video codecs and performs call setup and clearing on both the LAN side and the switched-circuit network side.

Proxy server—Acts as both a UAS and a UAC. The proxy server is an intermediate device that receives SIP requests from a client and then initiates requests on the client's behalf. Basically, proxy servers receive SIP messages and forward them to the next SIP server in the network. Proxy servers can provide functions such as authentication, authorization, network access control, and security.

Redirect server—Receives SIP requests, strips out the address in the request, checks its address tables for any other addresses that may be mapped to the one in the request, and then returns the results of the address mapping to the client. Basically, redirect servers provide the client with information about the path that a message should take and then the client contacts the appropriate SIP server directly.

Registrar server—Processes requests from UACs for registration of their current location. Registrar servers are often co-located with a redirect or proxy server.

The Cisco SIP IP phone model terminals can attach to the existing in place data network infrastructure, via 10BaseT/100BaseT interfaces on an Ethernet switch. When used with a voice-capable Ethernet switch (one that understands Type of Service [ToS] bits and can prioritize VoIP traffic), the phones eliminate the need for a traditional proprietary telephone set and key system/PBX. 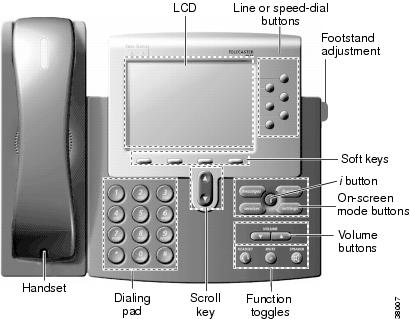 LCD screen—Displays information about your Cisco SIP IP phone, such as the number dialing out or calling in, online help, functions of soft keys and on-screen mode buttons, and so on.

Line or speed dial buttons—Provides access to a new line on the screen.

Soft keys—Activates the feature described by the text message directly above on the LCD screen.

Information (i) button—Provides online help for selected keys or features and network statistics about the active call. This feature will be available in a future release.

On-screen mode buttons—Retrieves information about current settings, recent calls, available services, and voice mail messages. Only the settings button is available in this release of the Cisco SIP IP phone.

Volume buttons—Adjusts the volume of the handset, headset, speaker, ringer and adjusts the brightness contrast settings on the LCD screen.

Headset and speaker—Toggles these functions enabling you to answer the phone using a headset or speakerphone.

Handset—Lift the handset and press the dial pad numbers to place a call, review voice mail messages, answer a call, and so on.

In addition to the physical features illustrated in Figure 1-2, the Cisco SIP IP phone also provides the following:

Call transfer—Allows the Cisco SIP IP phone user (user A) to transfer a call from one user (user B) to another user (user C). User A places user B on hold and calls user C. If user C accepts the transfer, a session is established between user B and user C and the session between user A and user B is terminated.

Call waiting—Plays an audible tone to indicate that an incoming call is waiting. The user can then put the existing call on-hold and accept the other call. The user can alternate between the two calls. If the user disconnects from one of the calls, they are automatically connected with the other call.

URL dialing—Provides the ability to place a call using an email address instead of a phone number.

IP is a network layer protocol that sends datagram packets between nodes on the Internet. IP also provides features for addressing, type-of-service (ToS) specification, fragmentation and reassembly, and security.

The Cisco SIP IP phone supports IP as it is defined in RFC 791.

UDP is a simple protocol that exchanges data packets without acknowledgments or guaranteed delivery. SIP can use UDP as the underlying transport protocol. If UDP is used, retransmissions are used to ensure reliability.

The Cisco SIP IP phone supports UDP as it is defined in RFC 768 for SIP signaling.

ICMP is a network layer Internet protocol that enables hosts to send error or control messages to other hosts. ICMP also provides other information relevant to IP packet processing.

The Cisco SIP supports ICMP as it is documented in RFC 792.

TFTP allows files to be transferred from one computer to another over a network.

DHCP is used to dynamically allocate and assign IP addresses. DHCP allows you to move network devices from one subnet to another without administrative attention. If using DHCP, you can connect Cisco SIP IP phones to the network and become operational without having to manually assign an IP address and additional network parameters.

DNS is used in the Internet for translating names of network nodes into addresses. SIP uses DNS to resolve the host names of end points to IP addresses.

For the Cisco SIP IP phone to successfully operate as a SIP endpoint in your network, your network must meet the following requirements:

A working IP network is established.

VoIP is configured on your Cisco routers.

VoIP gateways are configured for SIP.

A TFTP server is active and contains the latest Cisco SIP IP phone firmware image in its root directory.

A proxy server is active and configured to receive and forward SIP messages. 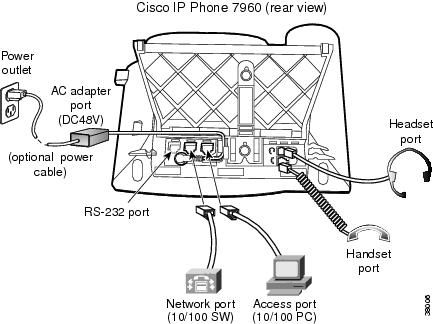 Connecting to the Network

The Cisco SIP IP phone has two RJ-45 ports that each support 10/100 Mbps half- or full-duplex Ethernet connections to external devices—network port (labeled 10/100 SW) and access port (labeled 10/100 PC). You can use either Category 3 or 5 cabling for 10 Mpbs connections, but use Category 5 for 100 Mbps connections. On both the network port and access port, use full-duplex mode to avoid collisions.

Use the network port to connect the phone to the network. You must use a straight-through cable on this port. The phone can also obtain inline power from the Cisco Catalyst switch over this connection. See the "Connecting to Power" section for details.

Use the access port to connect a network device, such as a computer, to the phone. You must use a straight-through cable on this port.

The Cisco SIP IP phone can be powered by the following sources:

To use this redundancy feature you must set the inline power mode to auto on the Cisco Catalyst switch. Next, connect the un-powered Cisco SIP IP phone to the network. After the phone powers up, connect the external power supply to the phone.

The Volume and Mute controls will also adjust volume to the earpiece and mute the speech path of the headset. The headset activation key is located on the front of the Cisco SIP IP phone.

The Cisco SIP IP Phone with a Catalyst Switch

To function in the IP telephony network, the Cisco SIP IP phone must be connected to a networking device, such as a Catalyst switch, to obtain network connectivity.

The Cisco SIP IP phone has an internal Ethernet switch, which enables it to switch traffic coming from the phone, access port, and the network port.

The current VLANs might be configured on an IP subnet basis, and additional IP addresses might not be available to assign the phone to a port so that it belongs to the same subnet as other devices (PC) connected to the same port.

Data traffic present on the VLAN supporting phones might reduce the quality of VoIP traffic.

Isolating the phones on a separate, auxiliary VLAN increases the quality of the voice traffic and allows a large number of phones to be added to an existing network where there are not enough IP addresses.

For more information, refer to the documentation included with the Cisco Catalyst switch.