Multi-Site Domain (MSD), introduced in DCNM 11.0(1) release, is a multifabric container that is created to manage multiple member fabrics. It is a single point of control for definition of overlay networks and VRFs that are shared across member fabrics. See Multi-Site Domain for VXLAN BGP EVPN Fabrics section in the Control chapter for more information on MSD.

The EVPN Multi-Site feature is explained through an example scenario. Consider two VXLAN BGP EVPN fabrics, site1 and site2 connected through devices in an external fabric, CORE. This document shows you how to enable end-to-end Layer 3 and Layer 2 traffic between hosts in site1 and site2, through CORE the fabric. Network configurations for the two VXLAN BGP EVPN fabrics are provisioned through DCNM software, 11.0(1) release. VXLAN BGP EVPN configurations are configured on the switches in the two fabrics. However, server traffic between the sites is only possible through a Data Center Interconnect (DCI) function. If a server in site1 has to send traffic to a server in site2 or vice versa, the DCI function (such as the Multi-Site feature, which is used for this example) should be configured on the BGWs of both the fabrics.

The CORE fabric is created as an external fabric.

The steps that are involved to enable EVPN Multi-Site feature and traffic flow across the sites or fabrics are:

The end-to-end configurations can be split into these 2 steps:

After successful deployment on both the sites, Layer 2 and Layer 3 traffic will flow between the two sites.

Underlay Extension from BGW_3 to RS_1

Overlay Extension from BGW_3 to RS_1

At this stage, overlay and underlay EVPN Multi-Site configurations are provisioned on BGW_3 toward RS_1 (as shown by the arrow in the figure). 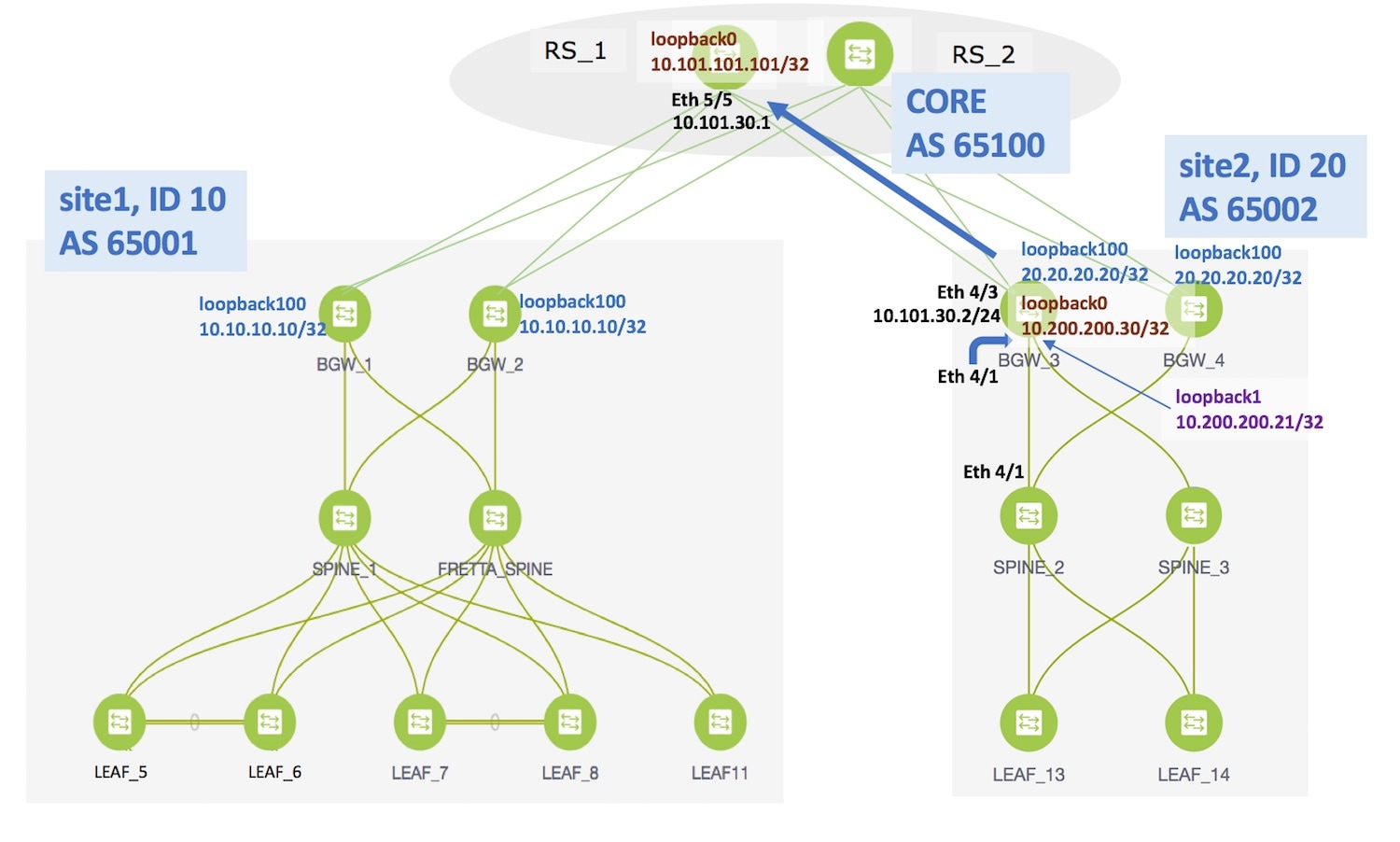 To complete EVPN Multi-Site configurations between site1 and site2 using DCNM, you should also configure as follows:

As noted earlier, the end-to-end Multi-Site configurations through DCNM Top-Down provisioning include these two steps:

(2) Deploying Networks and VRF Instances on the leaf switches and the BGWs.

At this stage, the first step explanation is complete. In the next part of the document, the networks' configuration (second step), is explained. After appropriate network configurations on the leaf switches and BGWs, server traffic will flow across the two sites for the deployed and extended networks and VRFs.

Typically, you create a fabric in DCNM, then create and deploy networks and VRFs on devices within the fabric on leaf switches, and then configure the BGWs for external connectivity. Though the focus of the document is external connectivity with EVPN Multi-Site configurations on BGWs using DCNM, for completeness and right context, network deployment on the BGWs is explained in this section. When EVPN Multi-Site deployment is completed, server traffic from these networks and VRFs on site2 will pass through a BGW (BGW_3 or BGW_4) towards site1.

Deploying Networks on the BGWs

Before you begin - In this scenario, we will deploy two networks in site2, MyNetwork_10000 and MyNetwork_10001, on the BGWs BGW_3 and BGW_4. You should ensure that you have already deployed the networks that you want to extend to site1 on the leaf switches (LEAF_13 and LEAF_14 in this case).

After deploying the 2 networks on the leaf switches and the BGWs, the networks will be extended to site1. To know how to create a new fabric, network, and VRF, see the Fabrics section in the Control chapter in the Cisco DCNM LAN Fabric User Guide, Release 11.0(1). The procedure:

As noted in the EVPN Multi-Site Configuration section, enable the following for end-to-end configuration:

RS_1 configuration example for the overlay—The following configurations are enabled on RS_1, and reproduced here for reference.