An ERSPAN source session is defined by the following: 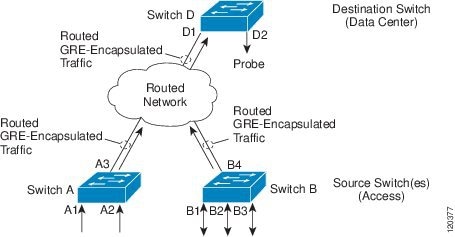 The direction of the traffic that ERSPAN monitors depends on the source, as follows:

The interfaces from which traffic can be monitored are called ERSPAN sources. Sources designate the traffic to monitor and whether to copy ingress, egress, or both directions of traffic. ERSPAN sources include the following:

Truncated ERSPAN can be used to reduce the amount of fabric or network bandwidth used in sending ERSPAN packets.

The default is no truncation so switches or routers receiving large ERSPAN packets might drop these oversized packets.

For information about shutting down ERSPAN sessions, see Shutting Down or Activating an ERSPAN Session.

The ERSPAN feature supports stateless restarts. After a reboot, the running configuration is applied.

ERSPAN has the following prerequisite:

•You must first configure the Ethernet interfaces for ports on each device to support the desired ERSPAN configuration. For more information, see the Interfaces configuration guide for your platform.

Guidelines and Limitations for ERSPAN

ERSPAN has the following guidelines and limitations:

The following table lists the default settings for ERSPAN parameters.

Configuring a Source Rate Limit for an ERSPAN Session

Depending upon the platform, each TCAM region might have a different minimum/maximum/aggregate size restriction. The default size of the EFP TCAM for IPv4 Egress VACL (e-vacl) is 512 and Egress RACL (e-racl) is 512.

To enable the ERSPAN rate-limit feature, you must carve e-racl TCAM region to program TCAM entry in the EFP TCAM to match on ERSPAN mirror copy traffic and provide policer result with the new configured rate-limit. If the default values of the egress TCAM are not changed or if the e-racl region has a non-zero value, then you need not explicitly carve TCAM to enable ERSPAN egress rate-limit feature. However, if the e-racl region was carved to be zero earlier then you must resize other TCAM regions to allocate entries for e-racl region. After TCAM carving, you must save the configuration and reload the switch.

The following example shows how to change the size of the e-VACL region:

The following example shows how to configure ERSPAN rate-limit:

You must configure an IP address to be used as the source of the ERSPAN traffic.

You can configure an MTU size for the ERSPAN traffic to reduce the amount of fabric or network bandwidth used in sending ERSPAN packets.

Shutting Down or Activating an ERSPAN Session

You can enable ERSPAN sessions to activate the copying of packets from sources to destinations. To enable an ERSPAN session that is already enabled but operationally down, you must first shut it down and then enable it. You can shut down and enable the ERSPAN session states with either a global or monitor configuration mode command.

Use the following command to verify the ERSPAN configuration information:

The following example shows how to configure an ERSPAN source session:

This example shows how to configure an IP address as the source for an ERSPAN session:

This example shows how to configure truncated ERSPAN: