You can achieve higher security and greater stability in Fibre Channel fabrics by using virtual SANs (VSANs). VSANs provide isolation among devices that are physically connected to the same fabric. With VSANs you can create multiple logical SANs over a common physical infrastructure. Each VSAN can contain up to 239 switches and has an independent address space that allows identical Fibre Channel IDs (FC IDs) to be used simultaneously in different VSANs. This chapter includes the following sections:

A VSAN is a virtual storage area network (SAN). A SAN is a dedicated network that interconnects hosts and storage devices primarily to exchange SCSI traffic. In SANs you use the physical links to make these interconnections. A set of protocols run over the SAN to handle routing, naming, and zoning. You can design multiple SANs with different topologies.

This section describes VSANs and includes the following topics:

With the introduction of VSANs, the network administrator can build a single topology containing switches, links, and one or more VSANs. Each VSAN in this topology has the same operation and property of a SAN. A VSAN has the following additional features:

The same Fibre Channel IDs (FC IDs) can be assigned to a host in another VSAN, which increases VSAN scalability.

Every instance of a VSAN runs all required protocols such as FSPF, domain manager, and zoning.

Fabric-related configurations in one VSAN do not affect the associated traffic in another VSAN.

Events causing traffic disruptions in one VSAN are contained within that VSAN and are not propagated to other VSANs.

Figure 15-1 shows a fabric with three switches, one on each floor. The geographic location of the switches and the attached devices is independent of their segmentation into logical VSANs. No communication between VSANs is possible. Within each VSAN, all members can talk to one another.

Without VSANs, a network administrator would need separate switches and links for separate SANs. By enabling VSANs, the same switches and links may be shared by multiple VSANs. VSANs allow SANs to be built on port granularity instead of switch granularity. Figure 15-2 illustrates that a VSAN is a group of hosts or storage devices that communicate with each other using a virtual topology defined on the physical SAN.

The criteria for creating such groups differ based on the VSAN topology:

VSANs can separate traffic based on the following requirements:

Production or test in an enterprise network

VSANs can meet the needs of a particular department or application.

Traffic isolation—Traffic is contained within VSAN boundaries and devices reside only in one VSAN ensuring absolute separation between user groups, if desired.

Scalability—VSANs are overlaid on top of a single physical fabric. The ability to create several logical VSAN layers increases the scalability of the SAN.

Ease of configuration—Users can be added, moved, or changed between VSANs without changing the physical structure of a SAN. Moving a device from one VSAN to another only requires configuration at the port level, not at a physical level.

Zones are always contained within a VSAN. You can define multiple zones in a VSAN.

Because two VSANs are equivalent to two unconnected SANs, zone A on VSAN 1 is different and separate from zone A in VSAN 2. Table 15-1 lists the differences between VSANs and zones.


Figure 15-3 shows the possible relationships between VSANs and zones. In VSAN 2, three zones are defined: zone A, zone B, and zone C. Zone C overlaps both zone A and zone B as permitted by Fibre Channel standards. In VSAN 7, two zones are defined: zone A and zone D. No zone crosses the VSAN boundary. Zone A defined in VSAN 2 is different and separate from zone A defined in VSAN 7.

VSANs have the following attributes:

State—The administrative state of a VSAN can be configured to an active (default) or suspended state. Once VSANs are created, they may exist in various conditions or states.

The active state of a VSAN indicates that the VSAN is configured and enabled. By enabling a VSAN, you activate the services for that VSAN.

The suspended state of a VSAN indicates that the VSAN is configured but not enabled. If a port is configured in this VSAN, it is disabled. Use this state to deactivate a VSAN without losing the VSAN's configuration. All ports in a suspended VSAN are disabled. By suspending a VSAN, you can preconfigure all the VSAN parameters for the whole fabric and activate the VSAN immediately.

VSAN name—This text string identifies the VSAN for management purposes. The name can be from 1 to 32 characters long and it must be unique across all VSANs. By default, the VSAN name is a concatenation of VSAN and a four-digit string representing the VSAN ID. For example, the default name for VSAN 3 is VSAN0003.

A VSAN name must be unique.

This section describes how to create and configure VSANs and includes the following topics:

You cannot configure any application-specific parameters for a VSAN before creating the VSAN.

You see the Create VSAN dialog box as shown in Figure 15-5. 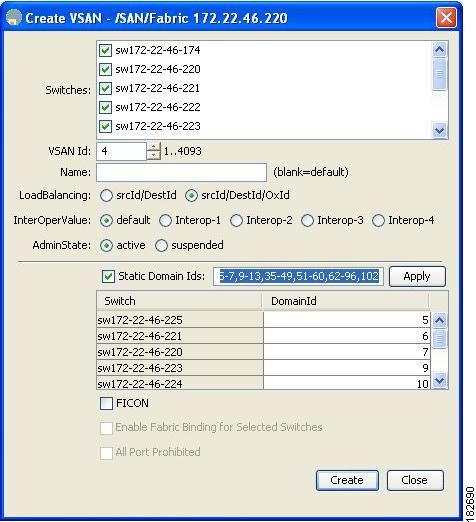 If you check the Static Domain IDs check box, Fabric Manager creates the VSAN in suspended mode and then automatically activates the VSAN.

Check the switches that you want in this VSAN.

Fill in the VSAN Name and VSAN ID fields.

Set the LoadBalancing value and the InterOperValue.

Set the Admin State to active or suspended.

(Optional) Check the Enable Fabric Binding for Selected Switches options if you want this feature enabled.

Complete the fields in this dialog box and click Create to add the VSAN or click Close.

Port VSAN membership on the switch is assigned on a port-by-port basis. By default each port belongs to the default VSAN. You can assign VSAN membership to ports using one of two methods:

Dynamically—Assigning VSANs based on the device WWN. This method is referred to as dynamic port VSAN membership (DPVM). Cisco Nexus 5000 Series switches do not support DPVM.

VSAN trunking ports have an associated list of VSANs that are part of an allowed list (see Chapter 13, "Configuring VSAN Trunking").

In the Physical Attributes pane, expand Switches > Interfaces and then choose FC Physical.

You see the interface configuration in the Information pane.

You see the Fibre Channel general physical information. Enter the new VSAN in the PortVSAN field.

The factory settings for switches in the Cisco Nexus 5000 Series have only the default VSAN 1 enabled. We recommend that you do not use VSAN 1 as your production environment VSAN. If no VSANs are configured, all devices in the fabric are considered part of the default VSAN. By default, all ports are assigned to the default VSAN.

VSAN 1 cannot be deleted, but it can be suspended.

VSAN 4094 is an isolated VSAN. When a VSAN is deleted, all nontrunking ports are transferred to the isolated VSAN to avoid an implicit transfer of ports to the default VSAN or to another configured VSAN. This action ensures that all ports in the deleted VSAN become isolated (disabled).

When you configure a port in VSAN 4094 or move a port to VSAN 4094, that port is immediately isolated.

Do not use an isolated VSAN to configure ports.

To display interfaces that exist in the isolated VSAN using Fabric Manager, perform this task:

Expand Fabricxx, and then choose All VSANs in the Logical Domains pane.

You see the VSAN configuration in the Information pane.

You see the interfaces that are in the isolated VSAN.

When an active VSAN is deleted, all of its attributes are removed from the running configuration. VSAN-related information is maintained by the system software as follows:

VSAN attributes and port membership details are maintained by the VSAN manager. This feature is affected when you delete a VSAN from the configuration. When a VSAN is deleted, all the ports in that VSAN are made inactive and the ports are moved to the isolated VSAN. If the same VSAN is recreated, the ports do not automatically get assigned to that VSAN. You must explicitly reconfigure the port VSAN membership (see Figure 15-6).

Configured VSAN interface information is removed when the VSAN is deleted.

The allowed VSAN list is not affected when a VSAN is deleted (see Chapter 13, "Configuring VSAN Trunking").

Any commands for a nonconfigured VSAN are rejected. For example, if VSAN 10 is not configured in the system, then a command request to move a port to VSAN 10 is rejected.

To delete a VSAN and its attributes using Fabric Manager, perform this task:

The VSANs in the fabric are listed in the Information pane.

Right-click the VSAN that you want to delete and click Delete Row from the drop-down menu (see Figure 15-7).

You see a confirmation dialog box.

Click Yes to confirm the deletion or No to close the dialog box without deleting the VSAN.

Choose Fabricxx > All VSANs from the Logical Domains pane.

You see the VSAN configuration in the Information pane as shown in Figure 15-8.

Table 15-2 lists the default settings for all configured VSANs.