This chapter describes the Switched Port Analyzer (SPAN) features provided in switches in the Cisco MDS 9000 Family. It includes the following sections:

SD ports do not receive frames, they only transmit a copy of the SPAN source traffic. The SPAN feature is non-intrusive and does not affect switching of network traffic for any SPAN source ports (see Figure 60-1).

Ingress source (Rx)—Traffic entering the switch fabric through this source interface is spanned or copied to the SD port (see Figure 60-2).

Egress source (Tx)—Traffic exiting the switch fabric through this source interface is spanned or copied to the SD port (see Figure 60-3).

SPAN capabilities are available on the IP Storage Services (IPS) module. The SPAN feature is only implemented on the FCIP and iSCSI virtual Fibre Channel port interfaces, not the physical Gigabit Ethernet ports. You can configure SPAN for ingress traffic, egress traffic, or traffic in both directions for all eight iSCSI and 24 FCIP interfaces that are available in the IPS module.

You can configure SPAN for Ethernet traffic using Cisco switches or routers connected to the Cisco MDS 9000 Family IPS modules.

The SPAN feature is available for the following interface types:

Interface sup-fc0 (traffic to and from the supervisor):

The Fibre Channel traffic from the supervisor module to the switch fabric through the sup-fc0 interface is called ingress traffic. It is spanned when sup-fc0 is chosen as an ingress source port.

The Fibre Channel traffic from the switch fabric to the supervisor module through the sup-fc0 interface is called egress traffic. It is spanned when sup-fc0 is chosen as an egress source port.

All ports in the PortChannel are included and spanned as sources.

VSAN as a Source

Guidelines to Configure VSANs as a Source

The following guidelines apply when configuring VSANs as a source:

Traffic on all interfaces included in a source VSAN is spanned only in the ingress direction.

If a VSAN is specified as a source, you cannot perform interface-level SPAN configuration on the interfaces that are included in the VSAN. Previously configured SPAN-specific interface information is discarded.

Interfaces are only included as sources when the port VSAN matches the source VSAN. Figure 60-4 displays a configuration using VSAN 2 as a source:

All ports in the switch are in VSAN 1 except fc1/1.

VSAN 1 and VSAN 2 are configured as SPAN sources.

For this configuration, the following apply:

VSAN 2 as a source includes only the TE port fc1/1 that has port VSAN 2.

VSAN 1 as a source does not include the TE port fc1/1 because the port VSAN does not match VSAN 1.

To activate any SPAN session, at least one source and the SD port must be up and functioning. Otherwise, traffic is not directed to the SD port.

A source can be shared by two sessions, however, each session must be in a different direction—one ingress and one egress.

You can temporarily deactivate (suspend) any SPAN session. The traffic monitoring is stopped during this time.

You can perform VSAN-based filtering to selectively monitor network traffic on specified VSANs. You can apply this VSAN filter to all sources in a session (see Figure 60-4). Only VSANs present in the filter are spanned.

You can specify session VSAN filters that are applied to all sources in the specified session. These filters are bidirectional and apply to all sources configured in the session.

PortChannel configurations are applied to all ports in the PortChannel.

If no filters are specified, the traffic from all active VSANs for that interface is spanned by default.

While you can specify arbitrary VSAN filters in a session, traffic can only be monitored on the port VSAN or on allowed-active VSANs in that interface.

An SD port has the following characteristics:

Allows data traffic only in the egress (Tx) direction.

Does not require a device or an analyzer to be physically connected.

Supports only 1 Gbps or 2 Gbps speeds. The auto speed option is not allowed.

If the SD port is shut down, all shared sessions stop generating SPAN traffic.

The outgoing frames can be encapsulated in Extended Inter-Switch Link (EISL) format.

The SD port does not have a port VSAN.

The port mode cannot be changed if it is being used for a SPAN session.

If you need to change an SD port mode to another port mode, first remove the SD port from all sessions and then change the port mode.

You can configure up to 16 SPAN sessions with multiple ingress (Rx) sources.

You can configure a maximum of three SPAN sessions with one egress (Tx) port.

In a 32-port switching module, you must configure the same session in all four ports in one port group (unit). If you wish, you can also configure only two or three ports in this unit (see the "Generation 1 Interfaces Configuration Guidelines" section on page 20-2).

SPAN frames are dropped if the sum of the bandwidth of the sources exceeds the speed of the destination port.

Frames dropped by a source port are not spanned.

Attach the SD port to a specific SPAN session.

Monitor network traffic by adding source interfaces to the session.

Right-click the port you want to configure and select Configure.

When a SPAN destination port is oversubscribed or has more source traffic than the speed of the destination port, the source ports of the SPAN session will reduce in their throughput. The impact is proportional to the amount of source traffic flowing in. Lowering the max-queued-packets value from the default value of 15 to 1 prevents the impact on the source ports. It is necessary to reconsider the default value for this setting as it may impact the source interface throughput.

The span max-queued-packets can be changed only if no span sessions are currently active on the switch.

If you are spanning the traffic going through an FCIP interface, span copies may be dropped even if the SD interface has more bandwidth than the amount of traffic being replicated. To avoid span drops, set the max-queued-packets to a higher value; for example, 100.

Choose the session ID (from 1-16) using the up or down arrows and click Create.

Repeat Step 4 for each session you want to create.

Enter the destination interface in the Dest Interface field for the appropriate session.

Choose active or in active admin status in the Admin drop-down list.

You see the SPAN dialog box.

You see the dialog box shown in Figure 60-6. 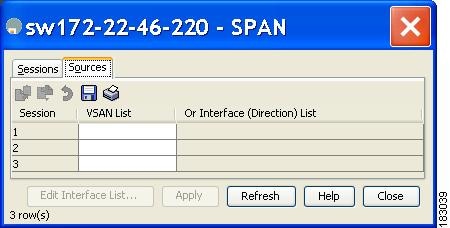 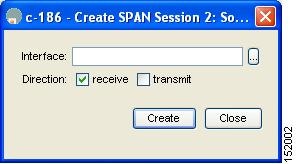 Click Close in each of the three open dialog boxes.

You see the SPAN dialog box.

The SPAN session is deleted.

SPAN features (configured in any prior release) are converted as follows:

The deprecated configurations are removed from persistent memory once a switchover or a new startup configuration is implemented.

You can monitor traffic using interface fc1/1 in a Cisco MDS 9000 Family switch that is connected to another switch or host. You need to physically connect a Fibre Channel analyzer between the switch and the storage device to analyze the traffic through interface fc1/1 as shown in Figure 60-8. 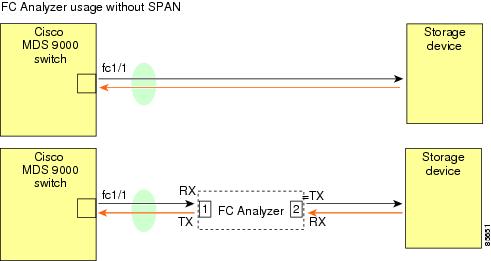 This type of connection has the following limitations:

It requires you to physically insert the FC analyzer between the two network devices.

It disrupts traffic when the Fibre Channel analyzer is physically connected. 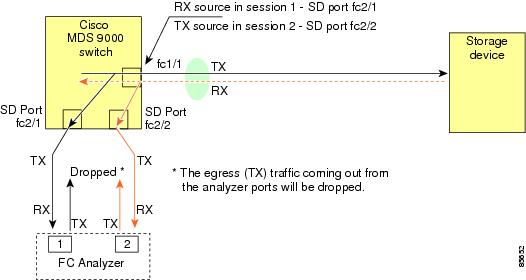 To configure Fibre Channel Analyzers using SPAN for the example in Figure 60-9, follow these steps:

Physically connect fc2/1 to port 1 on the Fibre Channel analyzer.

Physically connect fc2/2 to port 2 on the Fibre Channel analyzer.

You do not need to use two SD ports to monitor bidirectional traffic on any interface as shown in Figure 60-9. You can use one SD port and one FC analyzer port by monitoring traffic on the interface at the same SD port fc2/1.

Figure 60-10 shows a SPAN setup where one session with destination port fc2/1 and source interface fc1/1 is used to capture traffic in both ingress and egress directions. This setup is more advantageous and cost effective than the setup shown in Figure 60-9—it uses one SD port and one port on the analyzer, instead of using a full, two-port analyzer.

To use this setup, the analyzer should have the capability of distinguishing ingress and egress traffic for all captured frames.